Reporters for the Roma

This past spring, Kristína Magdolenová of the Roma Press Agency (RPA) grew accustomed to chaos in the workplace. Inundated by a continuous stream of phone calls, emails and visitors, she worked 12 to 14 hours a day responding to inquiries from journalists throughout Europe. They all asked the same question: Will the Roma migrate en masse to the West when Slovakia joins the European Union? 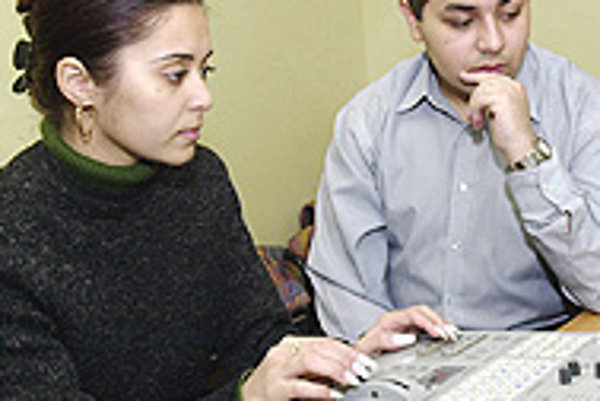 Font size:A-|A+0
This past spring, Kristína Magdolenová of the Roma Press Agency (RPA) grew accustomed to chaos in the workplace. Inundated by a continuous stream of phone calls, emails and visitors, she worked 12 to 14 hours a day responding to inquiries from journalists throughout Europe. They all asked the same question: Will the Roma migrate en masse to the West when Slovakia joins the European Union?

Frustrated by what she viewed as journalists magnifying Europe's misunderstandings about the Roma, Magdolenová, the RPA's executive director, also saw the situation as an opportunity to inform a broader audience about her agency's work.

"We have one major goal, to change the image of the Roma in the media," she says.

Now, five months after EU expansion, the anticipated mass exodus of Roma has not occurred, and foreign journalists are no longer coming in droves to the RPA office. So Magdolenová has focused once again on perceptions about the Roma within Slovakia.

In a small apartment in Košice, she and three other determined journalists are working toward eliminating the centuries-old stereotype of "Gypsies" as beggars, thieves and outcasts of society, and instead present a more diverse portrait of the Roma.

Though not Roma herself, Magdolenová, 40, has made it her mission to hire and train journalists who are from Slovakia's Roma communities. "We want to establish cooperation between Roma and non-Roma," she says, "and we want to explain to the majority the problems of the Roma minority."

Magdolenová is the only non-Roma journalist on the staff. Early on, she teamed up with a Roma TV reporter in Košice, Ivan Hriczko, who now serves as the RPA's news director. She also hired Etela Matová and Jarmila Vanová, two Roma women who had never worked in journalism prior to being trained by Magdolenová. She recruited the women as she travelled to various Roma communities, noticing their communication skills and interest in becoming reporters.

Hriczko, 24, began his journalism career when he was just 18 years old. "I became the first Roma anchorman on Slovak television. When I walked the streets, I would autograph my name for people. They usually thought I was Italian, Arabic or Spanish. Of course, they didn't think I was a Roma," he says, explaining that most people assume a Roma person would not have the education or skills for such a job.

While working full-time for the RPA, Hriczko continues to work as a TV reporter once a week for Slovak TV. His schedule is demanding: He is a journalist by day and a university student by night - the first member of his family to go to college. He is studying mass media and communications at the University of Matej Bel in Trnava, yet his work for the RPA remains his priority. "I think the work I do here is really important. I hope that people will remember this work in 20 years and that it will have some effect on society," he says.

Mainstream newspapers in Slovakia frequently publish articles about the Roma minority though it is rare for such articles to be written by Roma people themselves. The RPA is trying to change this by training Roma journalists to write about their own communities. Their articles are posted on the agency's web site (www.rpa.sk) and occasionally printed in major publications such as the daily SME, Domino Fórum and The Slovak Spectator.

Of special focus in recent RPA articles is the Roma "middle class," about which most Slovaks know nothing, says Magdolenová.

Now that the term has been introduced into the public discourse, she says the next step is to find ways to help the Roma middle class become re-integrated into mainstream society. Magdolenová hopes that her group of journalists, in changing the public's image of the Roma, can help lead the way to greater opportunities for the Roma middle class.

Other recent articles include the impact of this summer's floods on Roma families and the government's anti-discrimination initiative, and plans for social reforms. The RPA's work is being praised well beyond the circles of Roma advocates. An article that was written by Magdolenová and Hriczko - a portrait of a Roma community from different points of view - recently received the Slovak Literature Fund's 2003 award for journalism.

In addition to writing their own stories, the RPA staff provides assistance to other journalists, helping them to establish contact with Roma families and local officials in villages throughout Eastern Slovakia.

When the RPA was flooded with inquiries prior to the EU's expansion, newspaper reporters and TV crews from England, France, Germany, Spain, Portugal, Belgium, Sweden, Norway, Finland and The Netherlands sought help from Magdolenová and her colleagues. The flurry of visiting journalists reached its crescendo when riots broke out in Roma communities last February, following a major cut in the government's welfare benefits.

Magdolenová was not surprised by the protests and looting. "Hunger is not about dignity," she says. "I think that when people starve, they won't think about the rules anymore. So it depends on the government as to how they will resolve this problem."

As for the RPA's own ability to help resolve problems faced by the Roma, Magdolenová is finding it more challenging now than she first envisioned three years ago to accomplish her agency's objectives. Back then, the Open Society Institute (OSI) provided start-up funds to help establish the agency. But when the OSI grant came to an end last year, Magdolenová had to scale back on staff and office space.

Medienhilfe, a Swiss foundation, is now the RPA's major sponsor. The RPA also receives small grants from the European Community, the US and Dutch embassies in Slovakia, the Slovak Labour Ministry and the Slovak Culture Ministry. However, all of the grants cover less than half of the RPA's annual budget, so Magdolenová worries about being able to pay the current staff of four journalists and one administrative assistant - all of whom earn the minimum wage.

"I feel this weight on my shoulders, but not because of my personal life," says Magdolenová. "I feel for the people I employ, because we gave them a chance, we changed their lives, and if we simply couldn't continue, I would have the feeling that we failed, and I would feel responsible that these people would just get bitter and disappointed."

At the end of each day, Magdolenová has a debriefing with news director Ivan Hriczko. To unwind from their heavy workload and the pressure of finding more funding, they sometimes go dancing at a nightclub, where Hriczko has occasionally felt unwelcome. Often, he is the only Roma person there. "People may not say something racist," he says, "but if they stare at you in a certain way, you know what they're thinking." Magdolenová won't let him give in to his concerns about what other people think. She convinces him to stay and dance to his favourite American pop tunes.

Ever since her first job as a newspaper reporter in 1996, Magdolenová has been writing about the Roma minority in Slovakia. It all started one day when a Roma man came into the newsroom. "He told me the story of his life, saying he was forced to go to a special elementary school," Magdolenová recalls. "And I couldn't understand that. I couldn't believe that somebody was not allowed to study in this country. This was completely new information for me."

Since then, she has been committed to writing articles about the Roma from the Roma perspective. Along the way, she recruited her teenage son, Gregor, as an English interpreter, and her now ex-husband, Roman, to systematically monitor articles about the Roma in Slovakia's mainstream press. More recently, she has been studying English herself and watching American and British movies on DVD to reinforce her textbook studies, so that she can communicate directly to journalists and Roma advocates worldwide.

Her determination stems not only from seeing the effects of discrimination on the Roma but also from experiencing such discrimination firsthand, when people mistakenly assume that she is of Roma descent simply because of the work that she does.

"It often happens on the phone," she says, "when I introduce myself and say that I'm calling from the Roma Press Agency. People start shouting at me, they use the informal 'you,' and so either I stop talking with them or draw their attention to the fact that they must change their behaviour."

Changing people's behaviour may be the most challenging goal of all, but despite funding problems, Magdolenová's resolve remains steadfast. She is on a mission to save her country from what she thinks could turn into Balkan-style ethnic violence. As stated on the website, the RPA strives to contribute to "the creation of a multi-ethnic society in Slovakia." Magdolenová may be idealistic, but she is also realistic. Three years after the founding of the RPA, she knows their work has only just begun.