The decorative simplicity of the Myjavans

HOMESPUN materials, little colour and sparse decoration, typify folk costumes of the Myjava region in Western Slovakia. The Protestantism of the region may explain this, but the costumes are said to be as "rough" as the spoken dialect is "hard", reflecting the harshness of the living conditions there. 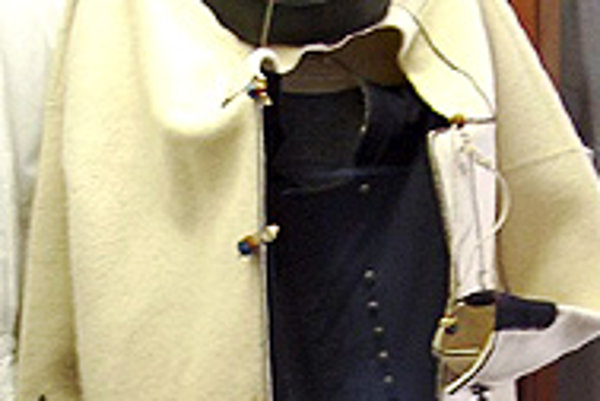 Font size:A-|A+0
HOMESPUN materials, little colour and sparse decoration, typify folk costumes of the Myjava region in Western Slovakia. The Protestantism of the region may explain this, but the costumes are said to be as "rough" as the spoken dialect is "hard", reflecting the harshness of the living conditions there.

Even so, the costumes do have an aesthetic quality and elegance, complemented as they are by the various Myjavan bonnets, scarves, white lace and fine white embroidery. The basic colours used are shades of white, blue and black, though yellow and green can also be found, especially on bridal gowns.

There are two types of Myjavan costume. One was worn in the town of Myjava itself and the other in the villages and small farms surrounding it.

In the town of Myjava at the end of the 19th and beginning of the 20th century, women's folk costumes typically consisted of an underskirt and an overskirt, an apron or fertucha, sleeves, bonnets, headscarf and several kinds of blazers (kacabaja, kaftán, špenzel). A characteristic feature was a triangular shaped scarf (kosička) worn around the chest and tied on the back, and a bodice sewn onto the skirt.

The costume worn by women in the villages was made up of an undergarment (rubáš), a skirt (kasanica), an apron (fertucha), sleeves, a bodice (prucel), a bonnet, a headscarf and a long or short fur coat (mentienka).

Men wore knickers, linen trousers, a shirt, a vest (kamizol), a coat (klaničiak), and a smock (halena). The main difference between the town and village dress was the use of colours on the coats and linen trousers. Villagers and small farmers wore light colours while people living in town wore dark ones.

The most beautiful part of the costumes worn by women both in Myjava itself and the surrounding villages were the sleeves and bonnets. Typical for the sleeves was a band trimmed with white embroidery or lace, gathered under the elbow. But the most noteworthy feature of the costumes were the bonnets or tied scarves. They were laid on to a special hairdo called an "okoličky", made-up of two bound plaits.

The bonnets were worn, and sometimes still are, by married women. An older type of bonnet was made of white chiffon or batiste, the newer one of embroidered tulle - white - of course. The front part of the bonnet was decorated with rich lace. The bonnets were embroidered, too. Each kind of lace, as well as each embroidered pattern, had its own name - "clover-like", "box-like", "leaf-like", "acorn-like", "bell-like" or "ladder-like".

Young girls who had not yet been confirmed in the church wore skirts with a half-shirt (oplecko). The kasanica skirt was allowed only after the celebration of the confirmation. This was the most important difference between the costume of a young lady and a child. The top of the bonnet was decorated not only with rich embroidery but also with a ribbon that formed a bow at the nape of the neck, with its ends hanging down the back.

The bonnets were heavily starched and there was a group of women called viazačky (viazať - to tie) who arranged them on the head. Until 1890 women used to wear long scarves, made from white batiste or etamine tied around the bonnet, which was trimmed with embroidery and white lace.

The austere colours and patterns of the Myjavan folk costumes can also be found on textile products used in their households, such as blankets and tablecloths.

The national artist, Martin Benka, who had a close relationship to this region (he visited it more than 20 times), was inspired by the forms and colours of Myjava folk costume. His studio-pieces and drawings of the men and women's clothes have a significant documentary value.

The traditional Myjava costumes can be found exhibited at the Museum of Slovak National Councils in Myjava, Štúrova 2.