Watch at your own risk 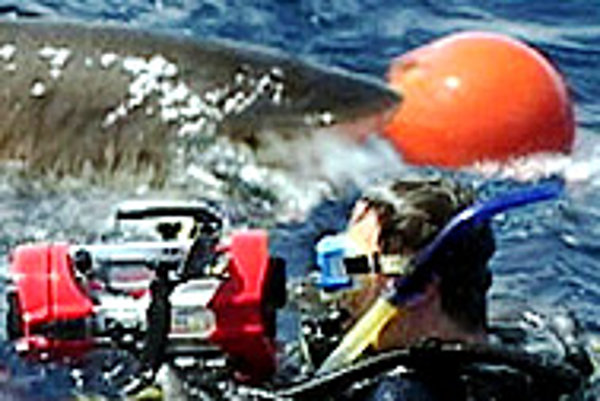 IT'S GENERALLY not a good thing when you desperately want the main characters to die. It is true that certain types of movies thrive on audience animosity. But these tend to involve characters that we love to hate: antiheroes, sexy killers, conniving charmers. So, even if viewers know that something awful must befall these characters for true satisfaction, we cannot help but feel a tinge of sadness when they meet their fate.

But then, there's also the matter of protagonists who are so annoying that we cannot wait to see them maimed and mutilated - and when and if they are, we find it immensely pleasurable. In some cases this is mere sadism, but it often just means that the movie can finally end.

Open Water treads dangerously close to both scenarios - no small accomplishment for a movie that doesn't even break the 80-minute mark.

Everything starts out reasonably smoothly - both for the characters and the audience. Susan (Blanchard Ryan) and Daniel (Daniel Travis) are a busy young American couple who go on an island vacation to regain their marital spark. As they spend time together in their bedroom, on the beach, and in town, we learn that they are nothing if not ordinary. They are attractive but not exactly gorgeous. They struggle with their marriage but not in any extraordinary way. They are likeable but not loveable.

So these two ordinary people then do what many ordinary people do when vacationing on a tropical island: they scuba dive. The beginning of the ride goes as planned. The tour guides explain the rules, count the passengers, and then send them into the water. Being experienced divers, Susan and Daniel venture off to explore the strange and beautiful creatures of the sea. Everything is pretty and, for a moment at least, blissful.

Gradually, the other divers wade back to the boat. While Susan and Daniel remain underwater, the tour guides take a head count and, for reasons not entirely clear, mistakenly determine that all passengers are present and accounted for. So they head back to the island, unknowingly leaving Susan and Daniel behind. By the time the forgotten couple resurface, it's far too late. At first clinging to the hope that the boat will return for them, they eventually realize that their only hope for survival is staying together, awake, and afloat until a search party is sent.

This proves difficult, however, as exhaustion takes over, tensions flare, and sharks begin to hover. Apparently, surviving will not be so easy. And as the husband and wife start to quarrel, showing precisely how irritating they can be, it seems like this may not be such a bad thing.

Much has been made about the movie's realism. The sharks, just like the human actors that played Susan and Daniel, were real flesh and blood. The camera work, digital and without the benefit of much money, frequently feels like a bare documentary. So, one might say, it only makes sense that Susan's and Daniel's ordeal would be difficult to watch. The viewer is supposed to understand their suffering.

But truly suffering with them requires a level of sympathy that becomes difficult to maintain as they grow increasingly obnoxious. Equally obnoxious is the Caribbean-style music that repeatedly pops up; it only further distracts from the movie's "feel-like-you're-there" realism.

Luckily, we viewers aren't actually there. Sharks can be deadly, frightening creatures. And these particular waters are also infested with two incredibly irritating people. As we spend more and more time watching them float and argue, it's hard not to want those sharks to put them and us out of our collective misery.