Tatras down, not out

SKI season in the Tatras, Slovakia's tallest mountains, begins in the wake of a November 19 windstorm the destroyed half its trees. Now residents and authorities are telling Tatra admirers that the best way to help is to spend their next holidays there.
Authorities are emphasising that although trees have been damaged, most hotels, resorts and transport facilities were either spared by the wind or have already been repaired. Tatra residents even hope the disaster could bring modernisation and tourist development to the mountains. 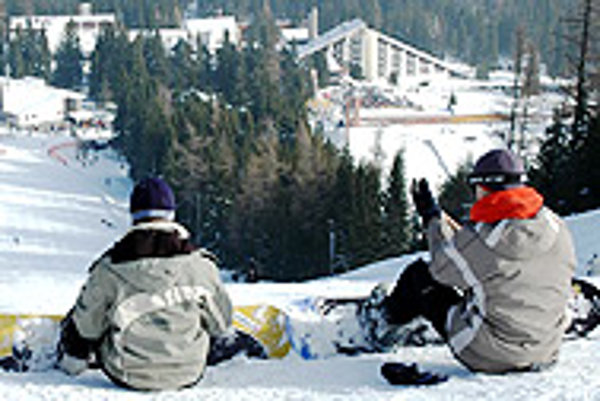 Font size:A-|A+  Comments disabled
SKI season in the Tatras, Slovakia's tallest mountains, begins in the wake of a November 19 windstorm the destroyed half its trees. Now residents and authorities are telling Tatra admirers that the best way to help is to spend their next holidays there.

Authorities are emphasising that although trees have been damaged, most hotels, resorts and transport facilities were either spared by the wind or have already been repaired. Tatra residents even hope the disaster could bring modernisation and tourist development to the mountains.

"Opening the winter season on the ski slopes of Interski and Esíčko on Štrbské Pleso is the best invitation for tourists reconsidering vacations since the windstorm," Peter Chudý, executive director of High Tatras Tourism Association, said.

"The Tatras were injured, but not killed," said Mikuláš Argalács, editor-in-chief of the Tatranský dvojtýždenník local biweekly newspaper. "Life in the Tatras has not stopped. Everything is being done so that the winter season will come off as best it can."

Transportation between High Tatra resorts is back on line. Damaged parts of the Tatra electric railway have been replaced with buses and other alternative means of transportation. The railway itself should be fully operational within several months. All hotels and resorts have reopened.

"The quality of services will not change," Chudý said. "On the contrary, we expect local service providers will be even more eager to please guests."

The Tatras are Slovakia's most popular destination, and their facilities have traditionally charged some of the highest prices in the country. Entrepreneurs are offering special low-cost deals this season, however. They say it has nothing to do with the wind disaster.

Lower prices are expected especially in smaller facilities. Discounts are not expected in larger hotels.

In recent years, hotels and resorts have complained of declining numbers of visitors. Fears have been raised that the windstorm will cause a further drop in tourism. Hotel managers say that won't happen.

"We expect winter and summer seasons at about the same level as before," said Chudý. "On the one hand, there will be a certain drop of visitors caused by the wind disaster. On the other hand, some visitors will be interested in experiencing the 'new' Tatras."

So far, hotels in Tatras have reported no increase in cancellations, and hoteliers are optimistic, even upbeat, about the upcoming holiday season.

"The disaster affected our surroundings but the hotel stayed untouched," said Daniela Ganzová, economist from the Grandhotel Praha in Tatranská Lomnica. "The standard of services is definitely unchanged. The guests wanted to have a view of the Tatras, and now they will have it,"

"Štrbské Pleso resort, where our hotel is, was hit the least," said Jozef Bandžela, director of the Patria hotel. "The forest around us was thinned out, but nothing drastic. The view from the hotel remains almost the same. The guests will not notice a difference."

"At least, we have an opportunity to improve the Tatras," said Štefan Hronský, director of Bellevue hotel in Horný Smokovec resort. "They will be even more beautiful and better than before.

"We ask potential customers to come to the Tatras. That is the best way to support the Tatras, to help clear damage and develop services."

Many Tatra inhabitants and entrepreneurs have taken a long view on the disaster, which they see as a chance to improve tourist facilities. They say they are aware, though, that modernisation must harmonise nature.

After 1970, when the Tatras hosted the World ski championship, Tatra development ground to a halt, locals say. Since then, disagreement between businessmen and environmentalists has created gridlock.

"The disaster could pave the way for the development of tourism and spa services," Chudý said. "But the recent work of some media - that there was going to be a Tatra "concrete lobby" and massive construction of new hotels - is simply not true. No one here is talking about new accommodation facilities."

Chudý said the Tatras have enough hotels; it is their standards and services that must be raised. He expects entrepreneurs and environmentalists to reach a compromise on modernisation and protection of fauna and flora.

"The unexpected windstorm has created room for such a compromise," he said.

"Tatra infrastructure definitely needs to be improved," said Ganzová. "The ski slopes should be widened, for example. But I would be very careful with new construction."

Hronský remarked: "It is definitely a chance for rebirth of tourism in the High Tatras. Everything happens for a reason."

Bandžela said: "I have lived here for 30 years. Great effort is being made [to modernise facilities]. But we don't want to be heavy handed. All relevant bodies will get together and present their opinions, including environmentalists. Without them, there would be problems.

What's on and what's not in the Tatras after the windstorm

Downhill ski slopes Interski and Esíčko in Štrbské Pleso are running full strength. Visitors can use the ski lift, chair lift, ski schools, and shops. The ski resort Ždiar - Strednica was not affected by the windstorm. The ski slope Jakubkova lúka in Nový Smokovec will be working for Christmas and New Year's. Cross-country ski routes in Štrbské Pleso and Tatranská Lomnica are already open.

Skiing in Hrebienok and Skalnaté Pleso will begin once there's enough snow.

Many trees fell in the Jamy ski resort in Tatranská Lomnica and Jamy may not be opened until Christmas.

All mountain cottages, apart from Pod Rysmi, always closed in winter, are up and running. All footpaths between Tatra villages are open.

The Tatra electric railway should be fully operational by summer. Several new and modern hotels and a new golf course in Tatranská Lomnica are set to open.