The long and winding road

A FEW months ago, I decided to take a drive from Hriňová to Detva to buy some Slovak candy at a local grocery store. Although I was not speeding or breaking any other law, a traffic police officer waved a small wand in front of my vehicle near the town of Kriváň, signaling me to stop. "Oh no," I thought, "What have I done now?"
The smartly dressed officer politely asked me in Slovak for my car papers, passport, and license. He wanted to make sure that the car - a silver Mercedes rented in Austria - was not stolen. After inspecting the documents, he saluted and let me go. 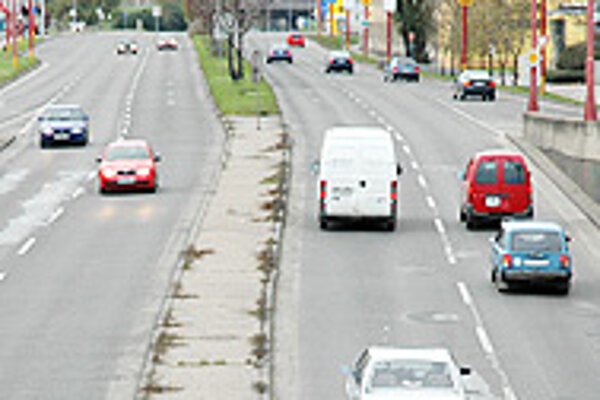 Font size:A-|A+  Comments disabled
A FEW months ago, I decided to take a drive from Hriňová to Detva to buy some Slovak candy at a local grocery store. Although I was not speeding or breaking any other law, a traffic police officer waved a small wand in front of my vehicle near the town of Kriváň, signaling me to stop. "Oh no," I thought, "What have I done now?"

The smartly dressed officer politely asked me in Slovak for my car papers, passport, and license. He wanted to make sure that the car - a silver Mercedes rented in Austria - was not stolen. After inspecting the documents, he saluted and let me go. This was a routine inspection - something common in Slovakia but relatively uncommon in the United States.

This is just one difference between driving in Slovakia and the United States, but there are others. For example, after picking up the candy, I decided to visit a local festival in Banská Bystrica. Many stalls were selling burčiak (a delicious young wine that tastes like grape cider).

When I tried to buy a glass, my wife said no. "There is zero tolerance for alcohol and driving in Slovakia," she informed me. Unlike in the US, you cannot have a beer with lunch and then drive. Sure enough, as we left the festival, we noticed that the police had set up sobriety checkpoints on all main roads leading out of town. Good thing I skipped the burčiak.

That was not my only surprise at the festival. When I pulled up to a parking space, I noticed that there was no metre. "I guess parking is free here," I told my wife. "Are you crazy? There's a machine at the end of the block where you can buy a ticket," she replied. She read the directions (written in English and Slovak) and told me to buy a ticket good for two hours and put it on my dashboard.

Driving home, I decided to whip out my cell phone and call my Slovak brother-in-law. Again, my wife stopped me. "You cannot talk on the phone, eat, or drink while driving in Slovakia. Driving is demanding here, so pay attention to the road." She had a point.

In Slovakia, one must always be on the lookout for slow moving vehicles, pedestrians, and cyclists. Also, cars often try to "thread the needle" when passing, forcing traffic on both sides of the road to pull towards the shoulder to let the passing car get buy. Driving on Slovakia's two-lane mountain roads, in short, is a much more active process than driving on your typical American interstate.

The most irritating thing about driving in Slovakia for me is slowing down from 90 to 60 kilometres an hour each time the main road passes through a village. Some settlements are so small that you only know you are in a town if you happen to spot a town sign.

As someone who rarely pays much attention to signage, this can be a problem. "Slow down," my wife remarked, "we are entering Vígľaš." "There's no police around and everyone is doing 90," I snap back. "Think of the children, retirees, and the cyclists! How would you like it if foreigners always sped through your village?"

In Slovakia, police may confiscate your license if they catch you going 30 kilometres above the speed limit - especially in villages and towns.

As someone who admires Europe's public transportation system, I always think twice about renting a car in Slovakia. Busses are cheap by American standards, and extend to even the smallest settlements.

For those visiting areas served by Slovakia's inter-city express trains, public transportation can also be faster and certainly more comfortable and relaxing. Express trains run every two hours from Bratislava to many points in Western and Northern Slovakia. If you plan to travel to Southern or Eastern Slovakia, however, a rental might save you time because the train system is not as developed in those parts of the country.

Renting a car at Vienna International Airport (VIE), however, is expensive. In addition to a 15 percent airport tax, most of the VIE rental agencies levy an extra for driving a car to Slovakia. It is cheaper to rent a car in Bratislava but less convenient and also more problematic if one needs an automatic.

I'll never forget receiving a call the day before I was to leave for Europe from the Bratislava office of a major international rental car company. "I'm sorry but we have no automatics left," the agent informed me. "But I reserved an automatic six weeks ago," I complained. "Sorry. How about an upgraded standard instead?" I ended up scrambling to rent a vehicle at VIE at a much higher cost. I later sent a letter to the rental car company explaining what happened and never received a reply.

In addition to high car rental rates, there are numerous other hassles and expenses associated with automobiles in Europe. As soon as one crosses into Petržalka (part of Bratislava) from Austria, one must buy a windshield sticker for Slovak expressways.

The price of these stickers varies depending on the period of time one intends to stay in Slovakia and the weight of one's car. I usually buy a one-week sticker at the OMV station for Sk150 (€3.76). While there, I also may buy gasoline, which now costs over $5.00 a gallon (€1 per litre).

The most frustrating aspect of the Slovak highway sticker system is that there are so few limited access highways in the countries. But to get from VIE to almost anywhere in the nation conveniently and quickly requires some highway travel. The speed limit on expressways is 130 kilometres per hour but in Bratislava, it drops down to 80. This reduced speed limit is unmarked, but is "implied" anywhere the expressway runs within the city limits of Bratislava.

And then there's the traffic. The downside of Slovakia's increasing prosperity is that there are more cars on the road with each visit I make to the country. The worst traffic is around Bratislava but even in unlikely places such as Detva, one can experience congestion and traffic jams. If you understand Slovak, you can get regular traffic reports on most radio stations (Twist, Fun, Express).

These reports, interestingly enough, also provide the locations of police checkpoints and speed traps. For some reason, the police love to set up speed traps on Saturdays during the middle of the day, but the highest speeding fine is just Sk2,000 (€50) the price of a basic parking ticket in Washington, DC, where I live.

Still, you do not want to be pulled over in Slovakia because a police stop is like a visit to the doctor's office: you never know what they'll find. Expect them to inspect everything from the first aid kit to the signal lights. Your car documents must have all the right stamps and seals.

Be sure to go over them carefully with the rental car company, familiarising yourself with each card and each scrap of paper. Also, always take these papers with you when leaving your vehicle. It is much easier for thieves to steal a car in Europe if they also have the car papers.

For the winter, snow tyres and detachable snow chains are recommended in Slovakia, so be sure you reserve a winterised vehicle for these months, especially if you intend to drive in mountainous areas. Also, headlights must be run during the day between 15 October and 15 March.

I've complained a lot in this article about the hassles of driving in Slovakia but I should point out that traffic and parking are generally much better in Slovakia than in Washington, DC. The old town section of Bratislava has the worst parking in the country but paid parking is relatively cheap by American standards, and convenient. I usually park at the Forum Hotel (parking now closed for construction) - one of the most central locations in the city.

Having a car is also great for those who like to ski, hike, or otherwise enjoy Slovakia's great outdoors. It allows one to quickly access national parks and other attractions with no bus timetables or transfers to worry about and plenty room for equipment such as skis. It's a true time machine. Finally, a car is all about freedom - freedom to stop anyplace one pleases, go anywhere one desires, and smell any roses one finds.