How far can art go?

SWISS artist Christoph Büchel came up with a somewhat unusual idea for an artistic performance. All he needed was a police car and a performer clad in an authentic-looking uniform. The pretend cop was to "sleep" in the car for 24 hours, parked in a public area of Trnava. The alarm system was to be on - but just the roof lights, not the siren. Curious passers-by could wander over, if they dared. 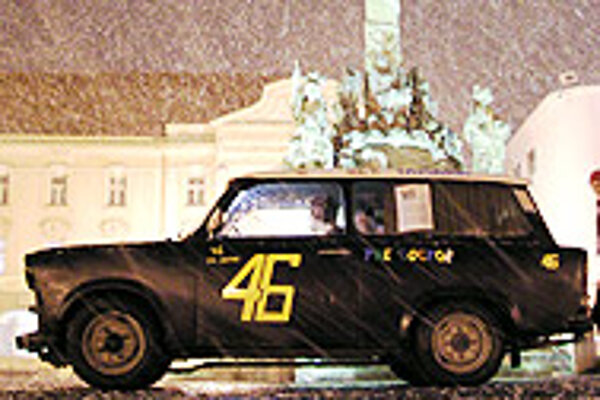 Font size:A-|A+0
SWISS artist Christoph Büchel came up with a somewhat unusual idea for an artistic performance. All he needed was a police car and a performer clad in an authentic-looking uniform. The pretend cop was to "sleep" in the car for 24 hours, parked in a public area of Trnava. The alarm system was to be on - but just the roof lights, not the siren. Curious passers-by could wander over, if they dared.

But the performance never happened. Police rejected the idea. On official letterhead, the police department wrote: "According to the generally binding laws and internal regulations, police cars can only be used for fulfilling the tasks of police headquarters. The cars can be used outside this framework only if they are, according to the parliament's law on the administration of state property No. 278/2003, redundant from the organisation. We cannot meet your request."

Büchel's experiment was to take place within an international exhibition project entitled Challenge, which recently opened in Trnava. Its curator, Juraj Čarný from Bratislava's Priestor Gallery, knew it would not be easy to carry out Büchel's project.

"There are always battles we have to fight," he said.

Five years ago, when he founded the Priestor Gallery, Čarný knew he wanted to challenge people's artistic tastes and introduce them to unusual, innovative ideas. The Challenge exhibition follows similar projects he has undertaken in the past that are triggered to "challenge artists, theorists, but also viewers to surmount the conventional clichés" in contemporary art.

"I seek answers and ask whether there are borders [in contemporary art] and where can they be moved," Čarný said.

The Challenge exhibition, running at the Trnava synagogue, which is home to the Ján Koniarek Gallery, presents works by almost 20 artists through video-art, installations, objects, performances and photographs. There are artists who have created radical works in the past, such as Martin Creed from Great Britain who won the prestigious Turner prize in 2001. This time he is presenting his artwork using light at the synagogue location.

The curator challenged artists to create new works especially for the project.

Serbian trio Vladimír Nikolič, Vera Večanski and Žolt Kovač spent 24 hours in a Trabant Combi parked on Trojičné Square in Trnava. The visitors to the exhibition can watch the slideshow and listen to the sound recordings of their time in the car.

Plamen Dejanoff, a Bulgarian artist living in Germany, is exhibiting his Made in Bulgaria project. In the historic Bulgarian town of Nove Tranovo, he decided to buy several houses and offer them to significant foreign cultural institutions for free. Erik Binder presents his video-documentation of a communist star being spray painted on a statue in frong of parliament.

According to Čarný, many people think that the limits in art have long been reached.

"Since Marcel Duchamp turned a urinal into a work of art in 1913, and since somebody exhibited canned excrement, they think art has long ago overcome any borders. That is why I ask myself whether innovation is still a legitimate term in art," said the curator who works with young, innovative and experimental artists.

"In the past, the situation was different. Artists didn't have to undertake new projects and innovate as quickly as they do today. Talking about Renaissance or medieval art, obviously there were significant creative developments from decade to decade. However, it was not as fast as it was at the beginning of the 20th century, during modernism, when several movements existed side by side and there were many strong personalities with inventive ideas.

"And today, in the time of postmodernism - after postmodernism itself questioned if anything new could be brought into art - artists find themselves in quite a complicated situation. If they want to break through, they have to show they are different with new ways and new concepts.

"So, I think it'll always be necessary to talk about a certain level of innovation in art," said the curator, who naturally allows room for failures as he experiments.

"There are always so many obstacles in the way of making these things work that I was surprised that only in the case of one artist [Büchel) did we end up with a situation we couldn't resolve."