THE FINANCIAL institution slated to play a key role in steering Slovakia into the Eurozone was given a new governor. Ivan Šramko will replace five-year incumbent Marián Jusko as head of the National Bank of Slovakia (NBS).
The parliamentary election elevating Šramko to the position was almost unanimous: 108 of the 109 deputies present lifted their hands for him. Šramko will step down as deputy governor of the NBS to take his new post. 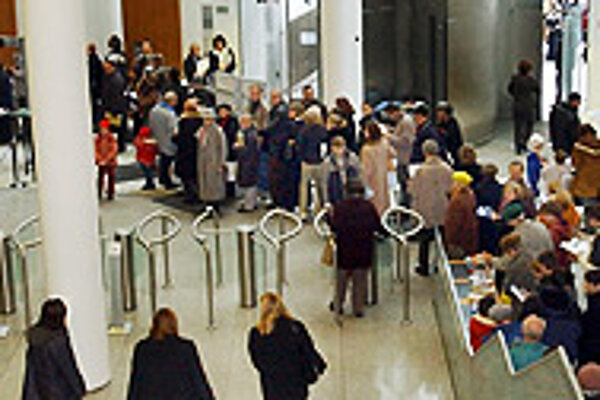 Font size:A-|A+0
THE FINANCIAL institution slated to play a key role in steering Slovakia into the Eurozone was given a new governor. Ivan Šramko will replace five-year incumbent Marián Jusko as head of the National Bank of Slovakia (NBS).

The parliamentary election elevating Šramko to the position was almost unanimous: 108 of the 109 deputies present lifted their hands for him. Šramko will step down as deputy governor of the NBS to take his new post.

"I think it is a positive signal showing that Šramko is a good candidate and that he is widely accepted and respected," Mikloš told The Slovak Spectator.

"I expect Šramko will continue the independent monetary policies of the NBS in a way that benefits the crown's long-term competitiveness and price stability," Mikloš added.

Financial analysts do not expect Šramko to make dramatic changes at the NBS in terms of monetary policy.

"Šramko has been an NBS deputy governor and member of the Monetary Board for three years now, and the government appointed him on the recommendation of outgoing governor Jusko. It seems likely that Šramko's views are broadly similar to Jusko's," Mária Valachyová, a research analyst with the VÚB bank, told The Slovak Spectator.

The NBS was in the media spotlight recently for its efforts to tone down the Slovak crown's strength. In mid-November, the International Monetary Fund (IMF) expressed concerns that the country's monetary policy would prevent Slovakia from meeting Maastricht inflation criteria for eventual euro adoption.

The central bank responded that it would continue cutting key interest rates as long as the crown is backed by economic growth, despite a recommendation by the IMF to keep the crown strong to fight inflation.

Financial analysts agree that the ultimate task for the central bank is to get the financial sector in shape so that it can transition easily into the eurozone.

"This task requires meeting the Maastricht criteria. For the NBS, the relevant criteria are low inflation, interest rate convergence, and entering and sustaining its position for two years in the ERM2, the exchange rate mechanism. Of these, the greatest challenge will be lowering and maintaining inflation close to the European Central Bank's target ceiling of 2 percent," Valachyová told The Slovak Spectator.

According to the VÚB bank analyst, Slovakia possesses one of the highest inflation rates in the region. And apart from creating a solid environment for euro adoption, the NBS faces the challenge of taking over complete supervision for the Slovak financial market.

As deputy governor, Šramko was in charge of bank supervision. According to Finance Minister Mikloš, this predetermines that NBS governor Šramko will cope well with the challenge.

Analysts say that filling the deputy post that Šramko is leaving behind will not be half as smooth as electing Šramko to the governorship. The cabinet approved NBS bank board member Martin Barto's nomination on December 15, and now the decision rests in the hands of parliament.

The Christian Democratic Movement (KDH) party asked that the cabinet nominate Barto as its price for supporting Šramko. The Slovak Democratic and Christian Union agreed, under the condition that Barto would not supervise the banking sector and would respect the cabinet's euro adoption strategies.

The Finance Ministry, however, rejected claims that there was any political bargaining behind Šramko's election.

"There were neither negotiations nor agreements on my side or the side of the SDKÚ," Mikloš told The Slovak Spectator.

Given the country's efforts to join the eurozone, the next deputy governor elections, in 2006, will be equally crucial. Currently, Elena Kohútiková occupies one of the two deputy governor positions.

Under Vladimír Mečiar's government, the NBS kept tight control over monetary policies because of expansive government spending and high domestic demand for currency. Together, these fuelled huge current account deficits. The policy of squeezing the market to reduce liquidity has made refinancing state debt very expensive - at least through the local market.

When elected to the NBS governorship by parliament in July 1999, Jusko said he saw no room for relaxing the central bank's monetary policy. Jusko had taken over the top NBS post from Vladimír Masár, the country's first NBS governor.

Jusko, as Masár, considered keeping the stability of the Slovak crown exchange rate one of his main tasks. Likewise, Jusko's term was characterized by the painful process of healing the banking sector.

In 1998, the government tried to strengthen its grip on the central bank, including proposing a controversial amendment to the NBS Act. The amendment was widely criticized by international organizations, and eventually failed to pass.

The amendment's provisions included an increase in the number of NBS board members from eight to ten, five of whom would be named by the government. In addition, the draft envisaged increasing the central bank's participation in short-term funding of the state budget deficit, which would have greatly reduced the central bank's financial resources to pursue its monetary policy.