"I'VE asked myself many times whether I'm in the right place, whether this is really my life and career, whether I'm not just thinking I'm doing good things while the reality is quite different," then Deputy Foreign Minister Ján Figeľ told The Slovak Spectator. [He had just won the weekly's 2001 Man of the Year award.] Back then, Figeľ said, "There's nothing wrong with self-evaluation, the occasional quo vadis." 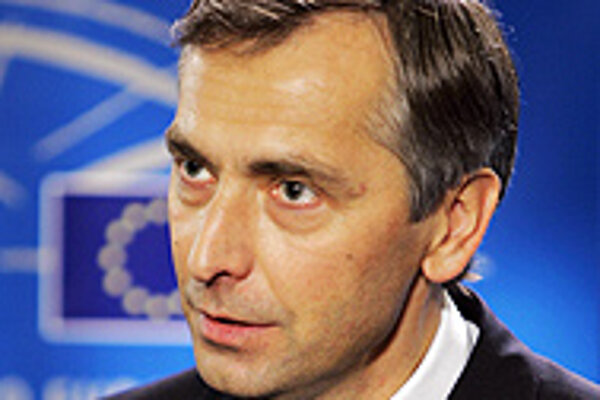 Font size:A-|A+0
"I'VE asked myself many times whether I'm in the right place, whether this is really my life and career, whether I'm not just thinking I'm doing good things while the reality is quite different," then Deputy Foreign Minister Ján Figeľ told The Slovak Spectator. [He had just won the weekly's 2001 Man of the Year award.] Back then, Figeľ said, "There's nothing wrong with self-evaluation, the occasional quo vadis."

Today, Figeľ works on the tenth floor of the shiny new headquarters of the European Commission in Brussels. As Commissioner for Education, Training, Culture and Multilingualism, the 44-year old has a budget of €16 billion spread over seven years. A crew of highly skilled, well dressed and excellently paid staff flurry around him.

Following his nomination at the end of January 2004, Figeľ took up office on 22 November. Comfortable as ever with self-evaluation, Figeľ agreed to an interview with The Slovak Spectator.

The Slovak Spectator (TSS): A Slovak as Commissioner for Education, Training, Culture and Multilingualism! Is this the job you wanted?

Ján Figeľ (JF): The more I'm in this job the more space I see for deeper cooperation in educational that can have a great impact on other areas. The Lisbon goals - of making Europe the most advanced region in the world - cannot be achieved without education.

TSS: Do you think a politician from small, new member Slovakia has the same chances to become president of the European Commission or have an economic portfolio?

JF: Some would say that commissioners with greater financial resources are the most important. But that is incorrect. A portfolio like education, which affects all citizens and is focussed on the future, is very important not only conceptually but also in the long-term for economic reasons. That's why I was invited to join the group of commissioners dealing with the Lisbon goals of making the Union the most competitive economy in the world. Also, even before [EU] enlargement, Slovakia and other new members were contributing to the European Union's development. Of course, all new members need the solidarity of older, richer members.

TSS: What did you do before the regime change? Has that given you a different perspective in your current job?

JF: I was a research and design engineer in power electronics for ten years. But I have always had an interest in politics, even during the Communist regime. During my university period, at Košice's Technical University, we tried to change some policies. I got into conflicts with the regimes [Figeľ's father was a bitter anti-communist following the "disappearance" of Ján's uncle in 1953, which was linked to the Slovak secret police]. In the early 1980s, they threatened to dismiss me from university. There was no space for real reforms. I took part in underground activities at a local level but this was not politics as such.

Real politics started for me only after the regime change in Slovakia. We were deeply divided during the Mečiar regime in the 1990s as to European integration and reform. We needed to catch up. Many people believed we could not enter the EU at the same time as others, like the Czechs, due to the loss of time during the Mečiar period. But the EU became the core theme in the push for change. As chief negotiator for accession, I became part of that. Still, May 1, the accession of Slovakia to the EU, is not the end of history. There's continual need for reform and fulfilling important goals to catch up with the EU economically.

TSS: Slovakia scored averagely in the latest Organisation for Economic Cooperation and Development (OECD) study on school pupil performance. What does this say to you?

JF: Slovakia had average or even below average scores. The OECD's Pisa study is important because it gives a large detailed picture. Everybody can see where they are now - or were several years ago. Nonetheless, we shouldn't exaggerate or go too much into detailed comparisons. The trends show that between the EU and the United States, in terms of 15-year-old pupils, it is possible for the EU to be the best in the world. On the other hand, it also indicates that some European countries have worsened.

TSS: As the European Commissioner for Education, how can you make changes in the member states?

JF: I'm aware that competence lies with the member states. But the European dimension is becoming ever more important. As a commissioner I don't have powers to direct or decide about steps in this area. I still have a lot of impact through communication with different ministries on integration for European education, however. These integration processes are now gradually bringing results in education, training, research and development, and the fostering of an innovation society.

TSS: You are also responsible for multilingualism. Do you think, as a multilingual Slovak, that you are more suited to this post?

JF: I cannot say that Slovaks are better than others. I was asked by Commission President José Manuel Barroso to think about this portfolio. I accepted. This is an interesting and human portfolio. Increasingly, people recognize its importance for our future achievements.

TSS: What are your exact goals for languages?

JF: For the first time there is a commissioner responsible for multilingualism. And the basis for this appointment comes from Regulation Number 1 of an official languages agreement made in 1958. So it has taken more than 40 years to put multilingualism not only on the administrative agenda but also on the policy agenda. The European Union stands for multilingualism, and my role is to promote that.

TSS: Everybody in Brussels talks about how all languages, even Slovak, are of equal value. But English, and to a lesser extent French and German, are much more equal than Slovak.

JF: We cannot and should not underestimate less widespread languages as they have an equal value in the European Union. The EU must keep and promote the principles that make members feel at ease and equal.

The basic truth is that it is good to speak foreign languages, including English, which is a common language for many people. But we should not replace multilingualism with monolingualism.

TSS: Slovaks do not have the same chances for jobs in Brussels. For instance, European organizations and associations often advertise jobs for "English native speakers". As Commissioner for multilingualism, what will you do against that?

JF: I am not aware of such advertisements - please show them to me. I am new in this job, but multilingualism is the principle I want to establish. Any misinterpretation is a valuable lesson and good source of information.

Multilingualism is a value. We say in Slovak, the more languages you know, the more times you are a human being. You have a comparative advantage if you are multilingual. This is the way to promote unity and diversity in Europe. Being a big country with a major language may be a disadvantage in this respect.