The streets of New Year

AS ONE YEAR gives way to another, Slovaks pour onto the streets of their towns to celebrate. The squares are filled with discos, concerts, entertainment of all sorts, and New Year's Eve in Slovakia is never complete without a spectacular fireworks display.
The New Year "countdown to zero" in Bratislava this year is scheduled to take place at the Rázusovo embankment. 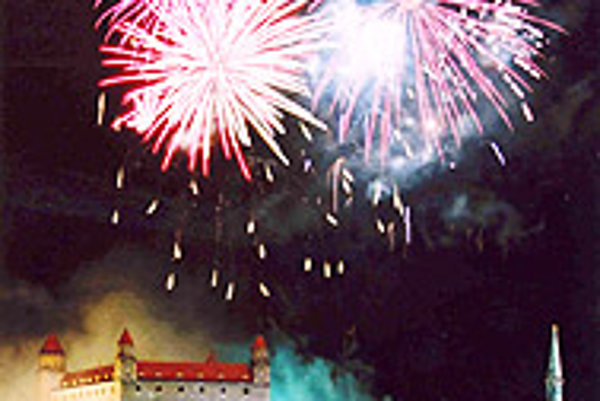 Font size:A-|A+0
AS ONE YEAR gives way to another, Slovaks pour onto the streets of their towns to celebrate. The squares are filled with discos, concerts, entertainment of all sorts, and New Year's Eve in Slovakia is never complete without a spectacular fireworks display.

The New Year "countdown to zero" in Bratislava this year is scheduled to take place at the Rázusovo embankment. Organizers say the midnight event will culminate with the traditional colossal fireworks display over the Danube. The show, intensified by using the river's reflection, is being put on by the London Art2Architecture studio, which contributed light animation to London's millennium celebrations.

There will nevertheless be celebrations in five other venues in the capital.

Main Square will reverberate to the rhythms of Mango Molas, experience the extravagance of Vidiek, and take pleasure in the poetry of Paľo Hammel, along with other dynamic performers, in an eight-hour concert marathon.

Reggae music will relax those gathered on Michalská Street while jazz will pervade Ventúrska. Laurinská will twist and shout to rock 'n' roll and Hviezdoslavovo Square will be lit up as a huge disco dance floor.

There will be 10 entry points into the city centre and parking will be restricted; authorities recommend using public transport.

Plenty of refreshments will be available at numerous booths. Taking your own bottles or fireworks inside the city centre will be forbidden.

The organizers expect a turnout of 30,000 people, including visitors from abroad. Bratislava's mayor, Andrej Ďurkovský, said that in Ljubljana, Slovenia, some 5,000 people have already booked their trips to Bratislava for New Year. Visitors from Italy, Ireland, Austria and the Baltic states are also expected.

On the other side of the country in Košice, bands, fire-eaters and dancers will start entertaining the crowds eagerly awaiting the midnight fireworks from 22:00 onwards.

The New Year's celebration in Prešov will run at two places, starting at 21:00. Entertainment for youngsters will be at Námestie Legionárov while older citizens should gather in front of the Ľudová banka. Among performers in Prešov will be the popular band, Metalinda, as well as Slovakia's very own version of Freddie Mercury.

This year, the New Year's celebrations in Banská Bystrica will be special because the town is celebrating the 750th anniversary of its being granted city status.

Nitrans can get into a sporting spirit early on December 31 by taking part in the traditional run up Zobor hill from the St Svorad Institute. Be at the starting line at 10:00 sharp. At 20:00, if those who have survived the exertions, can gather to celebrate by taking in a number of bands, including the popular combo, Gladiátor.

DJ's in Trenčín will mix disco music at Mierové námestie, from 21:00 until the midnight fireworks.

And one tip for those unwilling to leave the indoors: Žilina's Rondel Club will celebrate the end of 2004 in traditional American style, with country music and dancing.