NEWS that Slovakia would have to pay millions of euros to a Czech bank reached the country shortly before Christmas, evoking fears that the expense would crush the state budget deficit and endanger euro adoption plans.
The Washington DC-based international arbitration tribunal, The International Centre for Settlement of Investment Disputes (ICSID), wrapped up an eight-year trial with a verdict that requires Slovakia to pay Czech bank ČSOB Sk24.7 billion (€639 million). 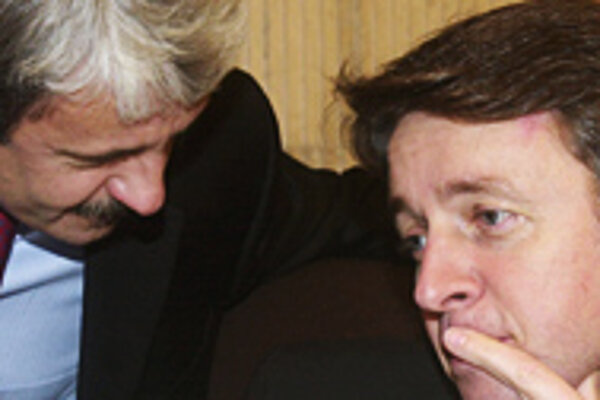 Font size:A-|A+0
NEWS that Slovakia would have to pay millions of euros to a Czech bank reached the country shortly before Christmas, evoking fears that the expense would crush the state budget deficit and endanger euro adoption plans.

The country's officials are silent on what course of action they will take. The Finance Ministry has not said whether it will accept the verdict or challenge it through appeal.

"The ministry is analyzing the court's verdict. Our priority is not to make hasty decisions," Peter Papanek, advisor to the Finance Minister, told The Slovak Spectator.

"The impact [of the bill] on the state budget will depend on the degree to which Slovakia will accept the verdict. Based on preliminary estimates, if the government decides against an appeal, the bill would deepen the state budget deficit in 2004 by 1.9 percentage points," Papanek told The Slovak Spectator.

"We are handling the case very sensitively and are aware that Slovakia must accept its obligations. Though we also think that the verdict can be legally challenged," he added.

Although awarded less than it argued for, ČSOB is satisfied with the verdict and does not plan to challenge the ruling at this point.

"Most likely our response will depend on the steps next taken by the Slovak side," spokesman at ČSOB headquarters in the Czech Republic, Pavol Hejzlár, told The Slovak Spectator.

According to Hejzlár, the verdict is not just about the sum to be paid.

"There are other conditions, too. [The verdict] has 126 pages and our lawyers are analyzing them all. We had hoped that the arbitration tribunal would have accepted the sum we originally requested from Slovakia [Sk34 billion - €880 million]," he told The Slovak Spectator.

Hejzlár said that the bank is interested in working with the Slovak defendant and is open to discussions on an eventual payment calendar.

The international arbitration tribunal upheld ČSOB's complaint regarding the debt of Slovak bailout bank Slovenská inkasná. The complaint emerged in the era when mutual property affairs between the former Czechoslovak federation partners were winding down.

Tensions increased in 1997 when the Slovak Finance Ministry refused to take over ČSOB's claims. ČSOB demanded to be paid the claims immediately, amounting to Sk13 billion (€336 million). When Slovakia again refused, the bank turned to the arbitration tribunal, the ICSID.

The announcement of the verdict generated worries about the ill effects the bill could have on Slovakia's euro adoption plans.

However, the Finance Ministry believes that the case with ČSOB will not threaten the country's timeline for entering the euro zone.

"This is only a one-time matter. It will have a minimal impact on 2007, which will be a crucial year for the adoption of the euro," State Secretary of the Finance Ministry told news wire Reuters.

The case certainly caused soul searching over who is to blame for the huge bill, which was among the highest claims ever dealt with by the international arbitration tribunal.

The Finance Ministry claims that the government of Vladimír Mečiar did not pay enough attention to the process of restructuring ČSOB, which weakened Slovakia's position and strengthened that of the Czech Republic in the case.

The current cabinet claims that it has, in fact, inherited this problem from the Mečiar government. The Movement for a Democratic Slovakia (HZDS), Mečiar's party, is trying to throw the blame back on the Mikuláš Dzurinda government.

"As far as I know there were some undocumented claims by the Czech party and thus the Slovak government, between 1995 and 1996, paid only part of the claim and halted the settlement, suggesting that a different proceeding should have been agreed upon. It seems that no agreement was reached and after 1998 the Dzurinda government somehow brushed the whole thing under the carpet and let it develop this far," HZDS spokesman, Igor Žvach, told The Slovak Spectator.

"I heard from Mr. [Sergej] Kozlík [former Finance Minister in the Mečiar government] that Slovakia's basic position was to reach an out-of-court settlement. If the Dzurinda government opened up the ČSOB case immediately after 1998 and in some decisive way presented Slovakia's arguments, things would have not turned out this way. There was grounds for an out-of-court settlement," Žvach claims.

Brigita Schmögnerová, the former Finance Minister serving in the first government of Dzurinda, inherited the case from Mečiar's regime.

Schmögnerová told the daily Pravda January 4 she does not think that the verdict of the international arbitration tribunal was entirely objective.

According to her, there were initial efforts to solve the case out-of-court. One time the ČSOB disagreed with the submitted proposal. Another time the Finance Ministry was unhappy.