Deputy minister resigns over spy past

AFTER weeks of media pressure, a deputy construction minister, Ján Hurný, handed in his resignation over allegations that he was an active agent of the former communist secret service (ŠtB).
Hurný, nominated to the post by PM Mikuláš Dzurinda's Slovak Democratic and Christian Union (SDKÚ), announced his decision to the Prime Minister January 3. Dzurinda accepted the abdication without further comment. 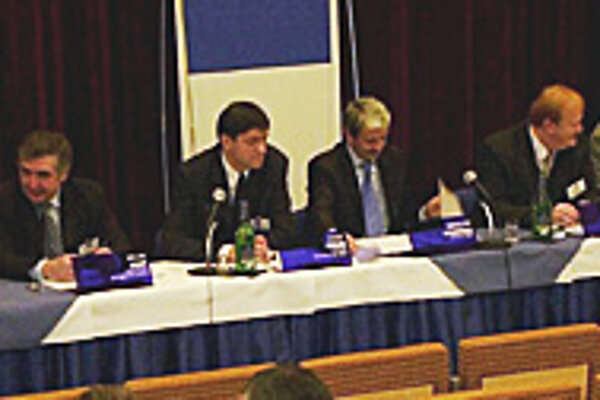 Font size:A-|A+0
AFTER weeks of media pressure, a deputy construction minister, Ján Hurný, handed in his resignation over allegations that he was an active agent of the former communist secret service (ŠtB).

Hurný, nominated to the post by PM Mikuláš Dzurinda's Slovak Democratic and Christian Union (SDKÚ), announced his decision to the Prime Minister January 3. Dzurinda accepted the abdication without further comment.

Hurný's decision came 45 days after the state-run National Memory Institute (ÚPN) published the ŠtB files and related documents from the service's eastern Slovak unit. Hurný was listed as an agent with undercover names "Spevák" (Singer) and "Asistent" (Assistant). According to the files, Hurný signed a cooperation agreement with the ŠtB in the 1980s.

Analysts, as well as some politicians, say Hurný's decision might create a precedent for other government officials suspected of being former spies to leave their posts.

Over the course of 2005, the ÚPN expects to publish the ŠtB's central and western Slovak section files in addition to the eastern unit already published.

According to Milan Hort, the chairman of the SDKÚ's parliamentary party caucus, Hurný's resignation was "his personal decision and the SDKÚ accepts it".

"I have become a tool for political attacks against the political party that nominated me to the post, and against PM Mikuláš Dzurinda. I must say that I never wanted to hurt anyone then, and I do not want to do it today, either. Therefore I have decided to leave [the post]," Hurný said January 3.

Hurný is determined to clear his name in court through legal means.

Analysts agree that if the decision had come earlier, the SDKÚ and Hurný could have saved themselves the negative publicity.

According to Soňa Szomolányi, political analyst with the political science department at Comenius University in Bratislava, "The more such cases, the better. This could set a precedent. If more like Hurný stepped down, such a practice might become standard, as it is in other developed democracies," Szo-molányi said.

She added, however, that all those accused of wrongdoing should be allowed to defend themselves publicly via courts or through other legal means.

"Otherwise such allegations may become a political tool," she said. In the neighbouring Czech Republic, where similar lists were also published, there are cases in which people were listed as spies but have then been exonerated in court.

Only recently, Speaker of Parliament Pavol Hrušovský said that it was a serious problem that former ŠtB collaborators held public posts.

"I am convinced that all those who were ŠtB agents, who voluntarily informed on their closest peers, should resign from public life," he said.

Luboš Kubín, political analyst with the Slovak Academy of Sciences, thinks that in Hurný's case the massive media pressure forced him to leave. When the ÚPN's publication first implicated Hurný as a former spy, he refused to consider stepping down.

Hurný's decision, however, has not yet inspired SDKÚ party colleague Jozef Banáš, who is also suspected of cooperating with the ŠtB, to consider taking similar steps.

According to the SITA news agency, Banáš insisted that the files he obtained from the ÚPN proved that he never hurt anyone.

Banáš, who has recently become the vice-president of NATO's Parliamentary Assembly (PA), worked in foreign trade and diplomacy during the Communist regime.

These spheres, he admitted, were controlled by the ŠtB. But according to him, even the leaders of the NATO PA considered the published lists of alleged ŠtB collaborators to be untrustworthy.