A FRESH group of Slovak Eagles arrived in the Golan Heights last month to help supervise and maintain a ceasefire between Israel and Syria. Like the Slovak soldiers before them, this batch of men will call the 34-kilometre stretch of demilitarized zone separating the two countries home.
"Soldiers, trust your commanders. 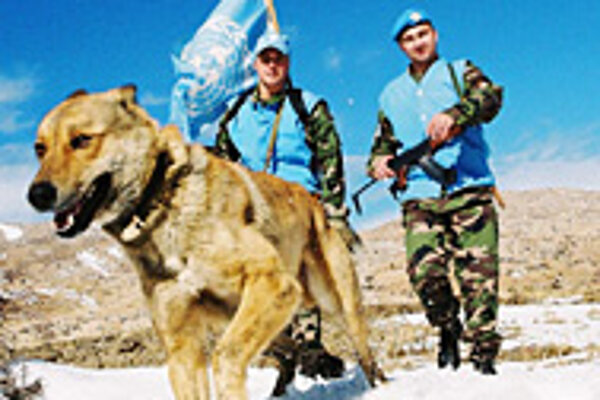 Font size:A-|A+0
A FRESH group of Slovak Eagles arrived in the Golan Heights last month to help supervise and maintain a ceasefire between Israel and Syria. Like the Slovak soldiers before them, this batch of men will call the 34-kilometre stretch of demilitarized zone separating the two countries home.

"Soldiers, trust your commanders. And commanders, show integrity and leadership so that you may earn the trust of your soldiers," said Lieutenant-Colonel Ján Tománek, the officer in charge of the incoming Eagles.

The soldiers are showing up for duty as part of the United Nations Disengagement Observer Force (UNDOF), an international peace mission established in 1974.

Slovaks have served UNDOF in the Golan Heights since 1998. This last deployment brings the number of Slovak soldiers on the mission to 94. They are joining ranks with soldiers from Austria (367), Canada (191), Poland (358) and Japan (45).

On their arrival to Hadar, a Druze settlement of 8,000 situated in the Golan Heights, the Slovak soldiers were surprised by the dusty, stony nature of the terrain and the low living standards of the villagers. However, as Slovak Captain Miloš Marcincák introduced the new recruits to the Druze people, the Eagles were encouraged by a demonstration of friendliness and warmth.

Dressed in traditional costume, Muftar Jaudet Ataui, head of Hadar, gallantly welcomed the soldiers. In a gesture of friendship, he invited Captain Marcincák's successor, Martin Somsky, into his house for aromatic coffee with cardamom.

According to First Lieutenant Tomáš Hunal of Bardejov, the Slovak contingent is part of the Austrian battalion. Like all military personnel, the Slovak soldiers live in small barracks at observation posts within the demilitarized zone.

While some posts are manned by just eight soldiers, others have more than 30. From these posts, in pairs, soldiers keep watch. Troops are also expected to patrol the surrounding area, taking care to keep on special mountain paths indicated with red paint. It is imperative that the soldiers not stray from the marked paths, as the Golan Heights is not swept for landmines.

Says Lieutenant-Colonel Tománek: "It sometimes happens that the soldiers find mines directly on the mountain paths. These are not placed in malice, though. Local shepherds risk their lives by relocating the mines from outlying areas, such as fields, to an obvious place on the path. That way the soldiers can destroy the mine. The shepherds see it as part of their duty."

Of all the observation posts, position number 17 is considered one of the hardest places to live because it is so remote. Currently, it is manned by seven Slovak soldiers as part of the Austrian battalion.

At 2,814 metres in the Hermon Mountains, position 17 can be cut off from supplies in winter because of weather. First Lieutenant Hunal says that heavy snowfall is typical in December and January, with up to two metres falling in two days. "When that happens, the soldiers have to wait, sometimes as long as a week, for the heavy Japanese technology to make its way through to them," he said.

The seven Slovak soldiers at post number 17 have a supply of frozen meat and drinking water for a minimum of one month. "The local enclosure is supplied with long-lasting food and heating oil, so the boys have sufficient supplies," Hunal said. He also added that the Austrian contingent can be cut off from rest of the world for three months at a time, as they are also at altitude in the Hermon Mountains.

"I would like to say thank you to all Slovak soldiers. They are high-quality performers and set an example for others," said Austrian Colonel Stefan Safranmuller, who holds the second most important position in UNDOF as chief of staff.

Canadian Captain Paul Mellema, the deputy officer in command of the UNDOF police force, agrees. "My Slovak colleagues know what hard work and responsibility is, which is why I respect and rely on them," he said of Senior Sergeants Rudolf Holka of Topolčany and Martin Kusenda of Martin.

Hunal likes the international flavour of his assignment. "This is a great place to improve my language skills," he said, a sentiment noted by the other Slovak soldiers as well. Interrupting a conversation with Japanese captain Taro Kawamota, Staff Officer Radoslav Wiegloš of Košice said he wants to travel to Israel while serving in the mission, as well as to Syria.

According to Tománek, serving in the UNDOF provides boys of Slovak and Hungarian nationalities to get to know each other and work through differences. Last year, for example, the Second Investigative Battalion of Bardejov worked alongside the Electronic Warfare Battalion of Štúrovo. Each battalion had a different specialization as well as personality types.

"It was going to be one of two outcomes," Tománek explained. "Either the boys could work together or undermine each other. Despite professional teasing, outside a national context, the boys found a way towards each other." Today, says Tománek, the two battalions make a great team.

Slovak soldiers have also forged positive relationships with locals based on respect of local traditions, honesty and trust. The Eagles routinely visit the local Druze barber shop to receive a haircut and shave - both with a razor. The experience, according to the Slovak soldiers, is leisurely and enjoyable. First, the barber prepares coffee or tea on his stove. Then he offers sweets to complement the hot beverage. And because no one hurries in Hadar, the barber and soldier first have a conversation in English. Only then can the process of grooming begin.

Maintaining the UNDOF mission costs $41.1 million annually. Expenses incurred by international parties are refunded. While Slovak soldiers share the same workload as others, they are paid just one-third of what their western counterparts make. Together with an international subsidy, Slovak soldiers take home $1,100 per month. The pay discrepancy has to do with the fact that wages are linked to the national economy.

According to Austrian Colonel Safranmuller, UNDOF mission is in a state of flux. "It is obvious that the situation in the zone is changing. Only recently there were about 5,000 people living here. Today, we have ten times that number."

Safranmuller predicts that UNDOF will change to accommodate the area's growth. For example, he mentioned replacing stationary observation posts or those on foot with increasingly motorized transportation.