THIS is the story of six well-regarded Bulgarian artists and the man who brought their work to Bratislava.
That man's name is Ivan Maslarski. A printer by trade, he grew dissatisfied with the limitations of the work and set out to express his own point of view about art and those he considers to be great artists. 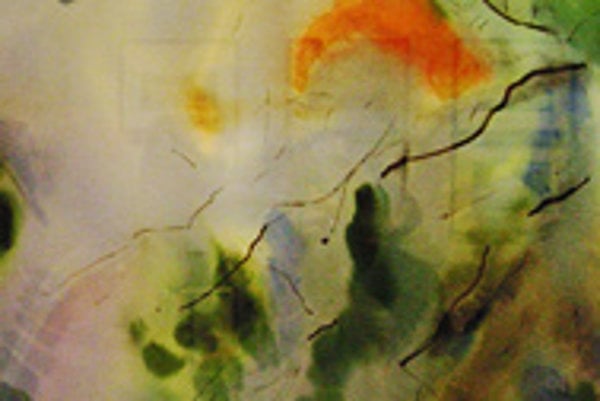 Font size:A-|A+0
THIS is the story of six well-regarded Bulgarian artists and the man who brought their work to Bratislava.

That man's name is Ivan Maslarski. A printer by trade, he grew dissatisfied with the limitations of the work and set out to express his own point of view about art and those he considers to be great artists. When the "winds of change," as he says, came to Bulgaria, he used his accumulated experience in the artistic community to establish a gallery in Samokov, Bulgaria.

At the opening of the exhibition at the Bulgarian Cultural Institute in Bratislava, Maslarski, speaking through Elena Arnaudová, the director of the institute, explained that this collection features the work of Bulgaria's most famous painters.

"This is not a business," he insisted. "These are remarkable painters who deserve to be known. I am fortunate to be able to present my point of view about art and my attitude towards great artists, many of whom would otherwise pass away and be forgotten."

It is a great honour to be responsible for preserving and presenting one's culture, and Maslarski takes the job seriously. The six Bulgarian artists he has chosen to feature are Svetlin Rusev, Svilen Blažev, Milko Božkov, Zachari Kamenov, Ivajlo Mirčev, and Javora Petrova.

Maslarski, as the show's curator, produced comments about all of the artists that Arnaudová shared with the opening-night audience.

Svetlin Rusev is, perhaps, the most important of the six to Maslarski because he is not only an artist and an academic, but has also promoted the work of other Bulgarian artists.

At a time when doing so was unpopular and even dangerous, Rusev was able to draw attention to artists who were not recognized by the Communist Party. He has been a professor at Sofia's Academy of Art since 1975, and was president of the Bulgarian artists' union from 1973 to 1985 and director of the National Gallery of Art, Sofia, from 1985-1988.

In Maslarski's opinion, if Bulgaria's fine art has any value at all to the rest of the world, it is thanks to the efforts of Rusev.

Svilen Blažev's work is a celebration of a Bulgarian tradition: Christmas bread. As in many cultures, a coin hidden inside the holiday sweet brings fortune and joy to the one who finds it.

Blažev's paintings, large and powerful, are abstractions of the images of cakes and coins. According to Maslarski, they reconnect us with this cultural ritual and reflect the entire spectrum of human emotions.

The most abstract works in this exhibit come from the brush of a painter who, according to Maslarski is "a personality who thinks and laughs." Milko Božkov lives in a world where each creature, each subject, has its own life. "He knows that in art those who want to maintain a sense of reality must be both brave and modest," Maslarski said.

Maslarski collaborated with painter Zachari Kamenov by photographing idyllic country life scenes, which Kamenov then re-interpreted. The pairs are displayed side-by-side. He tells us that Kamenov says, "The world is as it appears in my paintings. It is very simple." Life, according to the painter, cannot possibly be uninteresting even at its most ordinary.

"Life is everything: light [which is magic], the stones, the sea, the trees, the women...," Maslarski smiled at this. These paired images are there to remind us that in our hurried world, silence and calmness still exist and that simple activities bring joy.

On the works of Ivajlo Mirčev, Maslarski is direct. This student of Rusev, he says, believes that, "It is most important for the artist to look at the world with wide-open-eyes while at the same time believing very strongly in himself."

Javora Petrova is the youngest of the six artists and the only woman. Her work is strongly graphic and portrays a contemporary visual philosophy. She takes inspiration, Maslarski explains, from Bulgarian poet Boris Kristov, who wrote that it is important "not to pass by the hill," a reminder, certainly, to stop and smell the roses.

It is never easy to discuss visual art in words. If the artists were writers or poets, they would have chosen words to share with us. But they are painters. They speak to us in the language of colour and line, with form and texture. We must participate actively in this conversation. It does not take long to view the exhibition. But it is richly rewarding. Maslarski is right: The artists deserve to be heard.