THE EUROPEAN Parliament moved closer to defining the EU as a cohesive force in world politics by approving the European Constitution. A majority of 500 members of Europe's parliament (MEPs) voted for the treaty, with 137 against. Some 40 deputies refrained from voting, including three Slovak MEPs nominated by the ruling Christian Democratic Movement (KDH). 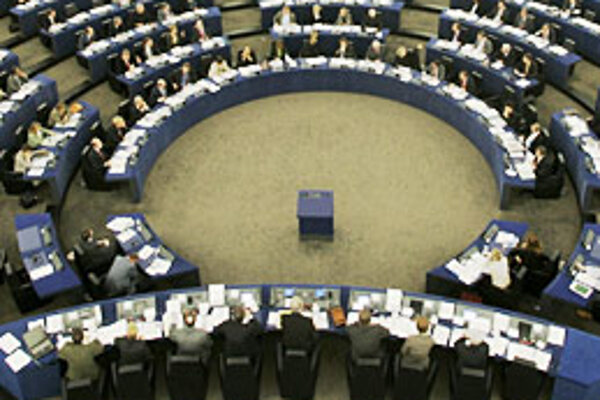 Font size:A-|A+0
THE EUROPEAN Parliament moved closer to defining the EU as a cohesive force in world politics by approving the European Constitution. A majority of 500 members of Europe's parliament (MEPs) voted for the treaty, with 137 against. Some 40 deputies refrained from voting, including three Slovak MEPs nominated by the ruling Christian Democratic Movement (KDH). The remaining 11 Slovak MEPs supported the constitutional treaty.

The vote approving the European Constitution has the character of a resolution. Although not yet binding, it is seen widely as an encouragement to EU members to ratify the treaty in their national parliaments or in national referenda.

If all member states ratify the document, the European Constitution would take effect in November of 2006.

"The European Constitutional Treaty is an important contribution to the EU. It is a document that defines the EU's ambition to become an important player in world politics and the world market, and it demonstrates our interest in spreading democracy throughout the European continent," Pál Csáky, the deputy prime minister for EU integration, told The Slovak Spectator January 12.

Slovak MEPs Ján Hudacký, Anna Záborská and Miroslav Mikolášik, all members of the KDH, belong to a group of critics that fears the ratification of a European Constitution will pave the way toward a European super state.

Their decision to refrain from voting in the European Parliament did not come as a surprise. Ahead of the election, Záborská announced that she would not support a European Constitution.

Záborská argues that a constitutional treaty is unnecessary. "The EU does not have a constitution now, and there is no mess," she said January 9.

In the past, KDH members have raised objections about the treaty's failure to mention Europe's ties to Christianity.

The KDH is campaigning for a referendum in Slovakia, which would put ratification of the European Constitution in the hands of the public instead of parliament. Prime Minister Mikuláš Dzurinda and Slovak President Ivan Gašparovič favour parliamentary approval.

Gašparovič told the press January 8 that the decision should be left to parliament. "Parliament should be allowed to ratify [the European Constitution] unless the Slovak people want to doubt the EU as such," he said.

The president added that while the Constitutional Treaty is not perfect, amendments could be made at a later date.

A referendum on the issue is controversial, not because Slovaks would oppose the ratification but because the popular vote quorum for a referendum is relatively high. At least 50 percent of the country's eligible voters would have to participate in the referendum for the results to be valid.

In the history of referenda in Slovakia, only one has produced a valid result: the 2003 referendum on the country's entry to the EU. At that time, 52.15 percent of the electorate voted - a mere 2.15 percent over the required quorum.

For this reason, analysts speculate that those in favour of a referendum are, in fact, fighting against the ratification of a European Constitution rather than supporting the voice of the public.

"The KDH's attitude of pushing for the referendum is in line with their rejection of the Constitutional Treaty as such," said Grigorij Mesežnikov, the head of the Institute for Public Affairs think tank.

PM Dzurinda suggested that the KDH's plan to prepare a draft bill on a referendum on the ratification of the EU Constitution is inappropriate.

But according to KDH Chairman Pavol Hrušovský, who is also the Speaker of Parliament, the EU Constitution is "such an important document that we should give citizens the chance to express their opinions about it".

Dzurinda insists that the Slovak people already agreed to the country's entry to the EU in the 2003 referendum; therefore, he believes it is up to the their representatives - politicians - to handle the issue.

EU Integration Minister Csáky supports Dzurinda, saying: "I respect the right of everyone to have their own opinion on anything, including the Constitutional Treaty.

However, in a situation where the document has already been signed by national governments, it is a little counter-productive to start a polemic over it."

Some 25 member states and three EU candidate countries signed the treaty in Italy on October 29, 2004, thus establishing a European Constitution. The treaty had been unanimously approved several months earlier, on June 18, 2004.

An increasing number of Slovaks want a referendum on the ratification of the European Constitution, according to opinion polls.

In a survey published by the Slovak Academy of Sciences at the end of 2004, 42 percent of respondents said they wanted a referendum while 33 percent wanted parliamentary members to decide on the document. In June 2004, only 30 percent were in favour of a referendum.

According to Institute for Public Affairs' director, Mesežnikov, the growing support for the referendum is probably due to a more widespread discussion about the constitution. He also said: "People see referenda as the best tool for making major decisions."

The analyst warned, however, about the possible difficulties of a referendum. If an unmet quorum invalidated the vote, it would be "a complicated issue for lawyers and politicians to sort out".

In a similar survey carried out in October by the Statistical Office, Slovak respondents were also asked about their knowledge of the European Constitution.

Only 2 percent said they had a "detailed knowledge" of the document; 19 percent felt they possessed a "general knowledge" while 77 percent admitted to knowing nothing.

Although some discussion of the constitution is alive in Slovakia, opponents of the referendum argue that it is impossible to expect citizens to study the document cover to cover in order to form an educated opinion.

Csáky said he supports communicating "through the media and other forms of public discourse, such as seminars" to explain to the public what the treaty means, and what citizens can hope to achieve with the document.

Of all 25 European Union members, only Hungary and Lithuania have ratified the European Constitutional Treaty.