SLOVAKIA will dominate the European map for two days in February thanks to the upcoming US-Russian presidential summit in Bratislava. Slovakia will have to foot the bill for this increased visibility, too.
Security measures being taken to safeguard the visit of US President George Bush and Russian President Vladimir Putin will cost Slovak taxpayers Sk205 million (€5.2 million). 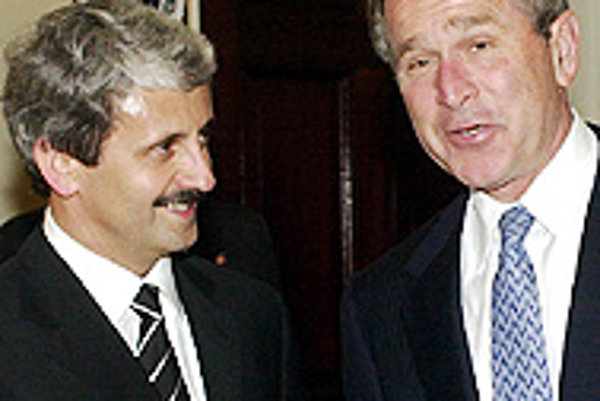 Font size:A-|A+0
SLOVAKIA will dominate the European map for two days in February thanks to the upcoming US-Russian presidential summit in Bratislava. Slovakia will have to foot the bill for this increased visibility, too.

On January 12, the Slovak cabinet approved the funds, which will be used for special police and engineering machinery as well as armaments. The money will come in part from the cabinet's reserves. Of the sum, Sk32 million (€790,000) will come from the coffers of the Interior Ministry.

"Around 5,500 policeman and 400 fire fighters will be deployed during the meeting," the press department of the Interior Ministry told The Slovak Spectator.

Interior Minister Vladimír Palko explained that the money poured into security efforts during the visit should be seen as a long-term investment. The equipment procured for the event will serve the ministry for years to come, he said.

According to Palko, the summit requires the greatest security measures ever taken in Slovakia's history.

The minister was reluctant to provide information on the venue and time of the meeting. He said that details are still being finalized.

Slovak state bodies will bear the responsibility for both Bush's and Putin's security. The Interior Ministry told The Slovak Spectator that these organizations would cooperate with US and Russian security units.

A special committee comprised of representatives of all the key institutions involved in the visit will coordinate the meeting and secure the logistics.

Though media reported that President Ivan Gašparovič, Prime Minister Mikuláš Dzurinda and Parliamentary Speaker Pavol Hrušovský could not agree on who would act as the official host to US President George Bush, officials denied any competition between the three officials.

Presidential spokesman Marek Trubač told The Slovak Spectator that President Bush's host would be the Slovak Republic itself.

"I want to deny media rumours on a competition between constitutional representatives over which of us will host Bush," Gašparovič said yesterday [January 12] during his meeting with Paige Reffe, the US organizer of the trip, and Rastislav Káčer, Slovakia's ambassador to the United States.

Trubač concurred: "There is no competition between the prime minister and president over the status of host."

According to Trubač, US President George Bush is not coming to visit the president or the prime minister. Rather, he is visiting the citizens of Slovakia as an appreciation of the country's long-term foreign policy.

Bush will visit Slovakia within a European tour planned between February 21 and 25. Analysts assume that his first stop will be Great Britain, and then Brussels, Germany and Bratislava.

The meeting of Bush and Putin with Slovak leaders is the first such summit in Bratislava. Analysts say the visit is immensely important for Slovakia.

Trubač told The Slovak Spectator that it was the United States that suggested Slovakia as a site for the meeting with Russia. He says it is an honour for the country that, despite Slovakia's small size, the US considers it a stabilizing element on the world stage.

The Bush Administration stressed that this is an important trip. It is the first trip Bush will take after his re-election. Sources say Bush views this visit as a new milestone in the relationship between the US and Europe.

In an earlier interview with SME, Charge d'affaires of the US embassy, Scott Thayer, confirmed that Bush had been intending to visit Slovakia for several years.

As for the programme of the visit, a US advance team is expected to come to Slovakia, and the Slovak side is expecting proposals and requirements from both the Americans and Russians.