A PANIC button is necessary when a situation becomes unsolvable by any other means. Ukrainian Marsel Onisko says that many artists from post-communist countries need one to keep on working.
Onisko joined innovative artists' group Fly United, based in Žilina, in activating such a device. Towards the end of 2004, Fly United hit the European and Japanese markets with a new, highly attractive art magazine - Panic Button. 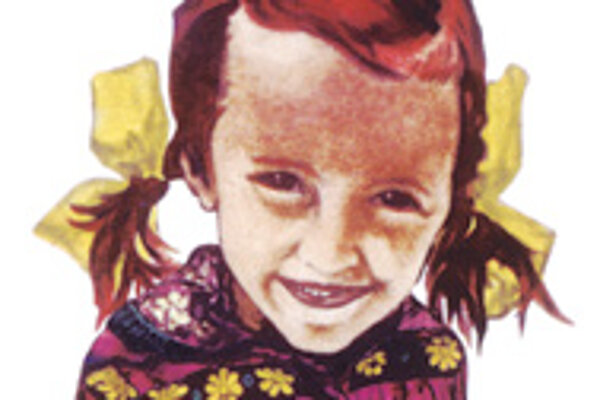 Font size:A-|A+0
A PANIC button is necessary when a situation becomes unsolvable by any other means. Ukrainian Marsel Onisko says that many artists from post-communist countries need one to keep on working.

Onisko joined innovative artists' group Fly United, based in Žilina, in activating such a device. Towards the end of 2004, Fly United hit the European and Japanese markets with a new, highly attractive art magazine - Panic Button.

The publication, printed in Slovak and English, is designed to reflect developments on the East European art scene and bring the projects created by unknown artists to the attention of a mainly western audience.

"The magazine does have one advantage compared to the artists - it doesn't need a visa to get to the West," Onisko said.

Panic Button is printed in full colour with 80 high-quality pages. Its eye-catching visual presentation not only helps the magazine cross borders more easily but also makes Panic Button a noteworthy contribution to the art scene itself.

"We have often met with a reaction from people in the West not believing that the magazine comes from the [former] eastern block. Most of them have the prejudice that everything that comes from the East is junk," said Vladimír Mičúch from Slovakia, the magazine's founder and art director.

Works presented in the magazine range from paintings and graffiti to fashion designs and performance art. The text is kept to a minimum. The reader is spared long explanatory commentaries and difficult expert criticism, and is left free to contemplate the art itself.

"The magazine is basically a gallery on paper, and opinion is left to the reader," Mičúch said.

Fly United plan to bring out two copies of the magazine each year. They have created a database on the magazine's website, where interested artists can send their contributions, as well as participate in the layout process with the publication's editorial staff.

"The magazine is not created the traditional, journalistic way. It's a result of direct cooperation between artists who use the space on the paper creatively," said Mičúch. This way, he added, they can directly communicate their art to readers.

The first issue saw cooperation between Ukrainian, Hungarian, Polish, Slovak, Czech and Kazakhstani artists. The presented works are a "best of" East European art as selected by Mičúch and Onisko. They know most of the contributors personally and closely follow their work.

Many contributions were made under difficult circumstances, particularly financial, forcing the artists to come up with some innovative solutions.

A group of Ukrainian artists, for example, used a graphic program designed for children to create their collection of T-shirts. Czechs and Slovaks recorded their CD Zatmenie (Eclipse), which comes with the magazine, in a dentist's surgery - one of the musicians' workplace. A Russian artist painted her pictures on both sides of the canvas to save money.

The magazine's aim is to help artists from the East, so it is primarily directed at the western market, where the price is higher than in the post-communist countries. Some of the 3,000 copies issued can be found in important cultural institutions in Paris, Berlin and Amsterdam.

German art theorist Jakob Hoffmann decided to directly support these artists who work under such difficult conditions by buying 50 copies of the magazine. Others, like Dutch painter and filmmaker Eef de Graaf help in spreading the word to cultural centres.

"The magazine is a very good way to promote the artists from the East because it gives a picture of what people are doing there. And if people [in the West] are interested in their work they can easily approach the artists through the magazine's website," de Graaf said.

According to her, art gallery owners in the Netherlands are very curious about what people in the East create and are enthusiastic about the project. "I know one person organizing sort of underground exhibitions and theatre plays who already plans to do something with the artists."

Panic Button can be found in Artforum bookstores in Slovakia (Bratislava's Artforum is situated at Kozia 20). It costs Sk180 and includes the CD Zatmenie, plus a poster. Orders can also be placed at: www.panicbutton.info.