Wheels of time keep on turning

IT is rare to find a working wheelwright nowadays, but the workshop of master craftsman Karol Smrek, of Ľubovňa, is a hive of activity, revealing its own incessant buzz.
He takes a piece of wood, marks it carefully with a pencil and places it in a machine. The small plank is gradually turned into an arc. Some more precisely judged turns and, as in days of yore, a brand new wooden wheel is revealed. 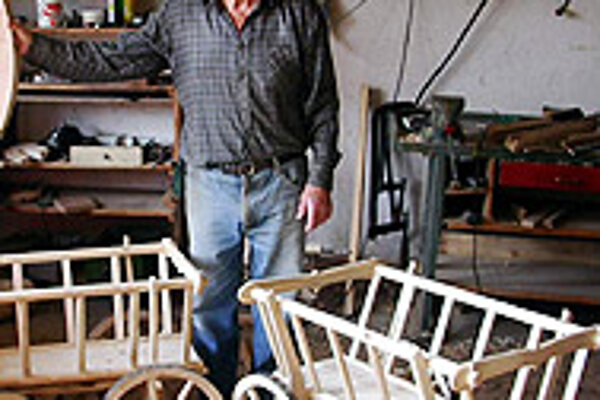 Font size:A-|A+0
IT is rare to find a working wheelwright nowadays, but the workshop of master craftsman Karol Smrek, of Ľubovňa, is a hive of activity, revealing its own incessant buzz.

He takes a piece of wood, marks it carefully with a pencil and places it in a machine. The small plank is gradually turned into an arc. Some more precisely judged turns and, as in days of yore, a brand new wooden wheel is revealed.

Modern-day materials and technology have driven such things as yokes, flails and wooden wheels from everyday use.

However, 77-year-old Smrek, known as Slovakia's last surviving wheelwright, is by no means ready to call it a day. Morning after morning he heads for his workshop for an honest day's toil.

Far from being obsolete, his products are sold all over the country, mostly as decoration.

"People buy them for ornamental purposes. Carriages and wagons aren't around much any more, but carriage wheels may be used to decorate gardens, as well as houses. They can be made into beautiful chandeliers or candelabras. They have a great variety of uses.

"We used to make all sorts of things - sleighs, skis, wooden wheelbarrows, and valašky [a shepherd's hatchet with a long handle]. For the castle in Stará Ľubovňa, I even made gun carriages for antique cannons and a replica of an old-fashioned carriage. Recently I carved a chess set for the large chessboard on the main court," says the master.

Smrek began carving wood as a young child. He realized from an early age that he had a talent for intricate manual work.

He loved whittling, and would spend hours making knick-knacks of all sorts, just for the love of it. "I was not the best student in school, but I had a talent for all sorts of handiwork. I never thought I would grow up to be a wheelwright though," he laughs.

In the end, he followed his head as well as his heart. "I knew that being a wheelwright, mason, or blacksmith were the most difficult trades, but in those times people needed wheels and suitable masters were scarce. I decided I'd learn to be a wheelwright. I liked the craft, and there was plenty of work."

The future master craftsman's apprenticeship started in Kežmarok. Two years later he moved to nearby Toporec. "There was a huge estate, with 35 horses and no tractor. We made so many wheels that if we had piled them up they would have reached the sky, so many of them there were.

"The apprentice years were tough. Masters had high status and were held in great esteem. Moreover, they were strict. What the master said stood. The stricter ones would often hit you. And we had to do whatever the mistress said - get water, attend to cattle, bleach cloth in the stream. It was torture. Some apprentices left because they couldn't take it, but I always did my part. The master was my idol, and I wanted to be his equal," the Ľubovňa wheelwright reflects.

He used all his experience in his own shop later on. Years went by and times changed but he stayed loyal to his craft.

The wheels of time keep turning and Smrek is more attached than ever to his wooden wheels. Only the finest material is used in their manufacture.

"The wood must be of superior quality, otherwise the wheels would break easily or be destroyed by pests. Ash, oak, or acacia are the woods of choice. The wood must also be properly dried, for at least two or three years," he explains.

Smrek will continue to give his all to this ancient profession - one for which he has a great love.

"Even though the craft is a demanding one, it is a beautiful and sweetly-scented one. The smell of wood is second to none. With all this, it is easy for me to turn my craft into a labour of love. Being a wheelwright is not just my job. It is my hobby," he affirms fondly.

Michaela Brezinová is a journalist with the Tatranský Korzár daily.