ONE of the key men at the interior department, Jozef Šátek, is no longer with the Anti-Corruption Bureau. Interior Minister Vladimír Palko unexpectedly recalled Šátek January 18.
Šátek handled corruption cases in top political circles.
According to Palko, Šátek failed in his responsibilities and created conflicts in the workplace. 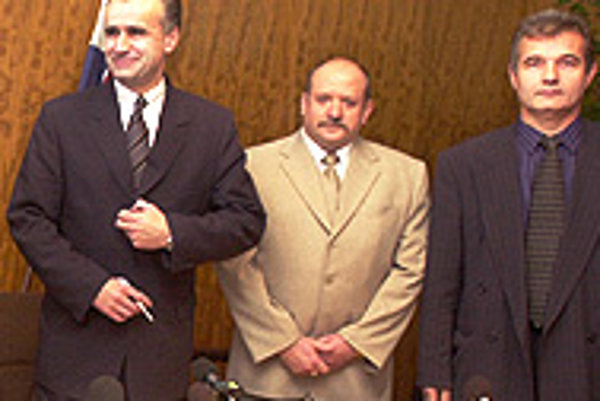 Font size:A-|A+0
ONE of the key men at the interior department, Jozef Šátek, is no longer with the Anti-Corruption Bureau. Interior Minister Vladimír Palko unexpectedly recalled Šátek January 18.

According to Palko, Šátek failed in his responsibilities and created conflicts in the workplace.

On January 19, Palko told the parliamentary security and defence committee the reasons for his surprise move.

He said that Šátek brought "intrigue" to police proceedings. Although Palko acknowledged that 49-year-old Šátek was a highly skilled police officer, the minister said Šátek had tendencies to get involved in behind-the-scenes moves.

Police Vice-President Jaroslav Spišiak, in his initial reaction to the recall, said that he had not experienced any problems with Šátek. However, the media reported tensions between the departments under Šátek and Spišiak.

Šátek in 2004 proposed that the Finance Police, a department that operates under Spišiak, be moved to the Interior Ministry.

The Anti-Corruption Bureau, a result of the 2004 transformation of the Police Special Tasks Department, investigates cases that it passes on to the special prosecutor and special court for trial.

"No employee of our office need be ashamed of what we have achieved," Šátek said.

Robert Kaliňák, head of the parliamentary security and defence committee and member of the opposition party Smer, told The Slovak Spectator that he thinks Šátek did a good job, opening cases that no one dared open previously.

"The minister [Vladimír Palko] had no objections to Šátek's professionalism. The reason for his recall was rather interpersonal affairs," Kaliňák told The Slovak Spectator.

The SME daily speculated that one of the possible reasons behind Šátek's dismissal is his launch of an investigation over new car purchases at the Interior Ministry.

Martin Cebo, who handled the Interior Ministry's automobile purchases, did not seek bids from a public tender process. A member of the Christian Democratic Movement (KDH), Cebo was installed at the ministry's economic department by Minister Palko himself, also a KDH party member.

Palko denied allegations that he sacked Šátek over the Cebo case, according to news wire TASR.

In fact, Palko said he commissioned three prosecutors to look into the matter to investigate whether or not the cars were bought legally.

The minister claims that the KDH is comfortable investigating its own members. He said that he personally requested Special Prosecutor Dobroslav Trnka to supervise the car procurement case.

Šátek's recall has shocked several politicians. Still, many will not oppose the move.

Roman Vavrík, deputy chairman of the parliamentary security and defence committee, told The Slovak Spectator that Palko's move was unambiguous, and that there were no doubts about the committee's trust in the interior minister.

To the question whether the committee plans to hear Šátek's version of the story, Vavrík said that he could imagine such a proceeding. However, he stressed that the committee took its direction from the Interior Ministry and not policemen.

"To call Šátek before the parliamentary security and defence committee would be very unusual. In 12 years of service in parliament I have not heard of such a proceeding.

"But if the person who is directly involved in the case shows interest in telling his view of the situation, I am certain that not only me but also the majority of the committee would agree to hear him," Vavrík told The Slovak Spectator.

He continued: "But a proceeding in which the committee would call a regular policeman before it for a hearing is unrealistic."

Šátek has a long and rich history as a member of the Slovak police force. He joined the Bratislava investigation team in 1985, starting out with smaller cases such as break ins. By 1990, Šátek was leading a specialized unit in charge of corruption cases.

Šátek investigated cases such as the riot at the Leopoldov jail. The public learned his name, however, during the third term of the Mečiar government, when Šátek was the head of the Bratislava investigation bureau.

In 1996 he investigated the murder of Robert Remiáš, one of the mediators between the Slovak Intelligence Service and the key witness in the abduction of Michal Kováč Jr, the son of the former president.

Due to complications surrounding the Remiáš case, Šátek resigned and worked as a manager in a private company. In 1998, he returned to the force to act as lead investigator on some of the most sensitive cases in Slovakia.

After 2002, Šátek worked on the team investigating the collapse of unlicensed deposit companies that robbed citizens of billions of crowns by promising unrealistic gains. The case put tycoon Jozef Majský in and out of pre-trial custody due to his involvement.

In July 2004, Šátek's bureau started investigating the allegations of vote buying in parliament. The opposition suspected that the ruling coalition, after losing its majority in parliament, managed to pass laws through parliament by engaging in unfair political bargaining with independent MPs.

Anti-corruption investigators, led by Šátek, arrested the mayor of Rača (a suburb of Bratislava) and KDH member Pavol Bielik in April 2004 on suspicion of bribery. Meanwhile, the KDH requested that Bielik step down from all his posts in the KDH.

(Tom Nicholson and Magdalena Macleod contributed to the story.)