SLOVAK President Ivan Gašparovič, Prime Minister Mikuláš Dzurinda and Speaker of Parliament Pavol Hrušovský rejected the idea of "autonomy" in a joint meeting on January 17.
The official announcement came after Prime Minister Ferenc Gyurcsány of Hungary said that for ethnic Hungarians living abroad the notion of autonomy would be a better solution than dual citizenship.
Hungarians voted against offering dual citizenship to ethnic Hungarians outside Hungary in a referendum last year. 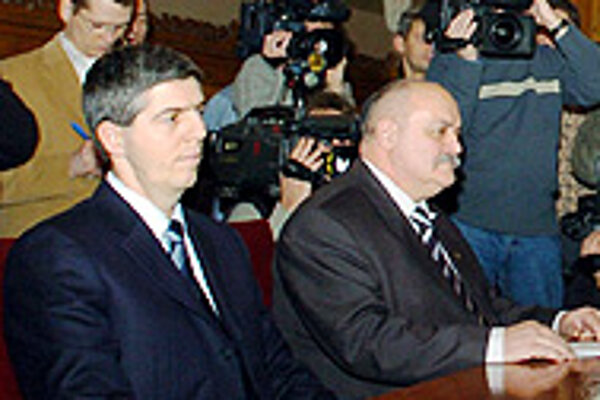 The official announcement came after Prime Minister Ferenc Gyurcsány of Hungary said that for ethnic Hungarians living abroad the notion of autonomy would be a better solution than dual citizenship.

Hungarians voted against offering dual citizenship to ethnic Hungarians outside Hungary in a referendum last year.

While Slovak political scientists interpreted Gyurcsány's statement as a general reference, Slovak politicians responded to Prime Minister Gyurcsány as if he were specifically targeting ethnic Hungarians inside Slovakia.

The Slovak Nationalist Party immediately called on the Slovak parliament to adopt a resolution that would unambiguously reject territorial autonomy on an ethnic basis.

According to their statements made in January, Gašparovič, Dzurinda and Hrušovský are not seriously concerned about southern Slovaks establishing autonomy.

The Hungarian Coalition Party (SMK) says it has never called for territorial autonomy.

"We are members of the ruling coalition and we certainly respect the cabinet's programme, which does not include any plans for territorial autonomy," Gyula Bárdoš, the head of the SMK's parliamentary deputy faction, told The Slovak Spectator.

He wanted to remind readers of The Slovak Spectator that it was the Hungarian prime minister who brought up the topic - not the SMK.

"We are realists and we know that autonomy must be decided in the given state. If there is no political will and willingness, we will not address the issue," Bárdoš told The Slovak Spectator.

The SMK uses the term "cultural autonomy" freely, however, and plans to pursue new legislation that would help support cultures of national minorities.

"Cultural autonomy is acceptable for us and we want to address this topic. For example, a law supporting cultural autonomy would help resolve minority culture issues not just for Hungarian minorities in Slovakia but all minorities."

According to Bárdoš, 15 years after the fall of Communism, a law providing financial support to national minorities is still missing. The SMK hopes to push such a law through parliament.

"Even the joint cabinet agrees that the issue [of minorities in Slovakia] needs to be solved. We will try to resolve it," he added.

Robert Kaliňák from the opposition party Smer told The Slovak Spectator that the idea of autonomy is absolutely unacceptable in Slovakia, although he understands it as part of the political debate in Hungary.

"I think [Hungarians] should approach this topic with more sensitivity. It is a delicate topic in Slovakia, and it definitely does not correspond with what we have written in our constitution," Kaliňák told The Slovak Spectator.

Prime Minister Dzurinda said that he thinks the issue of autonomy is an internal affair for Hungary, and he understands Gyurcsány's statement as part of the political melée in Hungary.

"My counterpart, Prime Minister Gyurcsány, addressed his statement to the Hungarian electorate due to forthcoming general elections there. In my opinion, no tickling from the other side of the Danube River should bother us. Autonomy in Slovakia is out of the question " Dzurinda told the news wire TASR.

However, the Slovak prime minister does not support cultural autonomy, either.

"Civic coexistence is better than any segregation. Segregation is not a good prospect. We can see it in Kosovo," Dzurinda said.

"An example of cultural autonomy in Slovakia is the official usage of the language of national minorities in municipalities where the minority exceeds 20 percent of the inhabitants. Most probably, the SMK imagines widening this practice," Grigorij Mesežnikov, political scientist with the Institute for Public Affairs, told The Slovak Spectator.

Mesežnikov thinks that the SMK is realistic enough to forget calling for territorial autonomy.

"At the moment, territorial autonomy could not be achieved in a constitutional way without having a political consensus over it. While the SMK is a loyal coalition partner, they cannot require anything that would exceed the frame of this consensus," Mesežnikov told the Spectator.

He added that the SMK made it clear that if the Slovak National Party - or any other nationalistic party - ever entered the future government, the issue of autonomy could be opened up. "It is an eventuality that might push the SMK towards this topic," he said.

Mesežnikov feels that the opposition pushed the ruling coalition to publicly comment on the Hungarian prime minister's statement.

His colleague, Miroslav Kusý, told the daily SME that people should not make a mountain out of a molehill in regards to the word "autonomy". He noted that the decentralization of the state administration in Slovakia creates many possibilities for the self-governing principle, which is a type of autonomy.

(Magdalena Macleod contributed to the report.)