BLUES, Slovak-style, is crossing the border. Organizers of the most recent Šumperk's Blues Alive, one of the largest blues events in Europe, invited five Slovak bands to play alongside 20 top international acts, which included soulful luminaries Corey Harris and Toni Lynn Washington.
"The blues scene in Slovakia is first class. We follow it closely," says Vladimír Rybička, director of the Czech Šumperk festival. 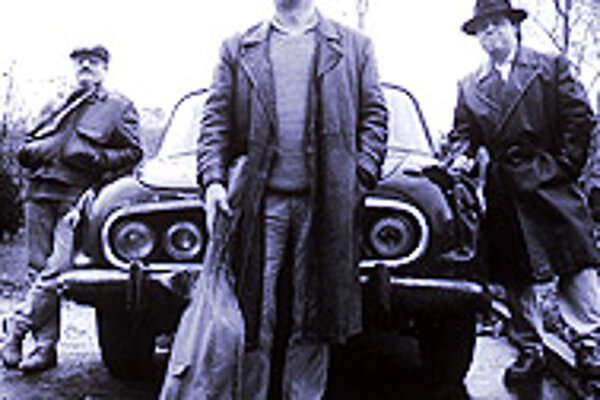 "The blues scene in Slovakia is first class. We follow it closely," says Vladimír Rybička, director of the Czech Šumperk festival.

According to critics, one of the most promising bands in the Slovak line-up at Šumperk in November was Juraj "Mojo" Haruštiak and his BluesBanda. The eclectic, five-member band stems from folk-country music and uses acoustic and electric instruments; Mojo's original vocals are an added bonus. Winning last summer's Blues Aperitiv earned them the invitation to appear at Šumperk.

The band played a stunning set in Šumperk's Blues Alive's official programme, and later started one of the event's informal jam sessions.

"They are a very good band and the more they play, the better they are. Moreover, Mojo is extraordinary," Rybička says. He said that next year, he would like the group to open Šumperk's main stage.

The current success of Juraj Haruštiak and his BluesBanda reflects the progress Slovak blues has made since the genre's spread worldwide in the mid-1950s from the Mississippi Delta in the American south.

Persecuted by the Iron Curtain, the first Slovak blues players often had to be inventive, not only in getting hold of the music but in learning blues techniques, like the emotive "sliding" on the guitar strings.

Ján Litecký-Šveda is considered the first Slovak bluesman. "I heard this strange sound [on recordings] and I tried to figure out how the guitarists were doing it," he recalled. Finally, Litecký-Šveda improvised: he spent hours filing off the neck of a vodka bottle before smoothing it into slide-playing shape.

The Slovak musician still uses his handmade bottleneck slide even though his library is crammed with information on how to build a "real" one.

Blues caught on in Slovakia during the 1960s, contributing to its worldwide spread after the King of rock 'n roll, Elvis Presley, pulled it out of its cradle, which was the black community in America in the 1950s.

From that time on, Slovak rock, jazz and big beat bands started to add blues motifs to their repertoires. But it was not until 20 years ago that the genre really took off in Slovakia.

In the 1980s, bands with a blues-only repertoire were formed. Concerts and festivals dedicated to the blues were organized. CDs were made and invitations started to arrive asking Slovak blues bands to perform abroad.

The quality of the Slovak blues scene rivals other European scenes, and stars of the genre have taken notice. The great Chuck Berry visited Slovakia in 1993. John Mayall and his Bluesbreakers came in 1997. Hans Theessink has played in Slovakia several times. The Za Zrkadlom Club and Lúky Culture House in the Petržalka district of Bratislava have hosted leading bluesmen including Long John Baldry, Guy Davis, Kathi McDonald, Gwyn Ashton, Butch Coulter and Marty Hall within their regular blues events.

How it all started

Rock 'n roll opened the door to the blues, and the famous rock groups of the 1960s and 1970s - The Rolling Stones, The Beatles and Led Zeppelin - ushered listeners in. Jazz players also brought the blues to the listening public by researching the origins of their own genre.

"Those who came to blues through English rock had no clue what they were in fact playing," said bluesman Litecký-Šveda.

For the Slovak blues legend, it was The Rolling Stones that led him to the blues. "Their music excited me so much I had to dismantle it. It was something so different that I wanted to get to its roots."

In the late 1960s, when the Communist clampdown let up a bit, the young Litecký-Šveda went to Germany for a seasonal job. Everything he earned he spent on blues records and a Texas-style jacket - things you just could not get in Slovakia at that time.

Gradually he discovered the blues' origins, the acoustic music from the Mississippi Delta. And that is where he has stayed, leaving behind the more popular "electrified" Chicago blues.

"The old blues is the best. It's so poetic and clean. It fascinates me how creative it is and how it developed out of nothing," he says.

His first public performance in 1970 in Bratislava's V-Club, where he played country-blues style, is considered the first genuine blues concert in Slovakia. It was the first time listeners had heard the music of John Lee Hooker and Leadbelly as it was originally played.

However, no one in Slovakia at the time joined this blues pioneer and tireless promoter of blues. The enforced "normalization period" (following the Russian invasion of Czechoslovakia in 1968) put a stop to any further development.

The seed, though, was planted. A year after Mikhail Gorbachev introduced his "perestroika" (in 1984) the pent up energy found some release.

"It was as if he had been sent from Heaven. It was the first time in our lives we had seen a fellow-countryman play and sing blues like that," Turtev recalled.

Soon after, Turtev and Procházka, today leading faces on the Slovak blues scene, formed the first Slovak pure-blues band, Bluesweiser, which is still going strong, though with a different line-up. Adrián Pullmann, who brought Turtev and Procházka together, also got the first festival devoted purely to the blues off the ground, in Bratislava's Rača district.

Blues enthusiasts in the city have also found their first regular meeting place - the Workers' Union Movement Club, based at Bratislava's Electro-technical Factory on Kominárska.

Soon after the revolution, the club closed down, but new venues began to appear - Havran, Zbrojnoš, Aligátor, and Stoka.

"Blues was in the air and musicians in other towns like Zvolen and Trnava began to join in," said Litecký-Šveda. He is the president of the Slovak Blues Society, an organization founded back in 1993.

"The whole history of the blues is represented by players currently performing in Slovakia: Delta blues by Ľuboš Beňa; acoustic and half-acoustic line-ups like Dura & the Blues Club [led by Juraj Turtev] and the Second Hand Band; early Chicago and hard Chicago blues by the likes of Frozen Dozen [led by "Boboš" Procházka] and the ZVA 12-28 Band; as well as various blues-rock formations."

Among those regularly exporting Slovak blues abroad are harmonica player "Boboš" Procházka from Frozen Dozen, Litecký-Šveda, and the inventive ZVA 12-28 Band from Zvolen. Almost all leading local bands have performed in the Czech Republic to rave reviews.

According to Litecký-Šveda, the success of Slovak bands abroad might lie in the approach to the local traditional music, especially in smaller towns, where it is still part of everyday life.

"Folk music has similar principles to the blues. There's musicality and sincerity, which have been formed over many years. Blues is also folk music - the traditional music of the black community [around the Mississippi Delta].

"Every nation is different. What is different about ours is the romantic, dreamy character that trends to the emotional rather than the rational. Until recently we were manipulated, so it was the heart that was used more."

It must hurt those with their hearts in the blues that there are fewer opportunities to perform than before.

Apart from a few annual blues festivals, there are not many places blues musicians can meet regularly. One such place, however, is the Stoka independent theatre on Pribinova, in Bratislava, where blues enthusiasts meet every Monday.

"At the beginning of 1990s, when the bands performed in clubs such as Aligátor and Zbrojnoš, the concerts were paid. Today, the only place we regularly meet and play is Stoka. The only way to generate some money is to pass around a collection hat. At the moment the situation is very bad in this sense, but luckily we have [guitarist Juraj] Turtev, who made the Stoka work," said Litecký-Šveda. Putting finances aside, bluesmen like Litecký-Šveda and Juraj "Mojo" Haruštiak love playing live and looking out at a sea of smiling, happy faces, many of who are hearing the blues for the first time. At the end of their concerts, they have difficulty leaving the stage because the crowd just wants more.

"Blues is good music, honest. It's on a good level here, so, let's give more people the chance to hear it," says Litecký-Šveda.