KRŇAČKY, krnohy, krnohe, krnaky, krne - these are all variations describing the same thing - a traditional wooden sledge used by woodcutters for transporting logs out of remote forests.
Nowadays machinery does the job krňačky used to, but for the past 40 years or so, this remarkable means of transport is now used by sporting folk looking for an adrenaline rush. 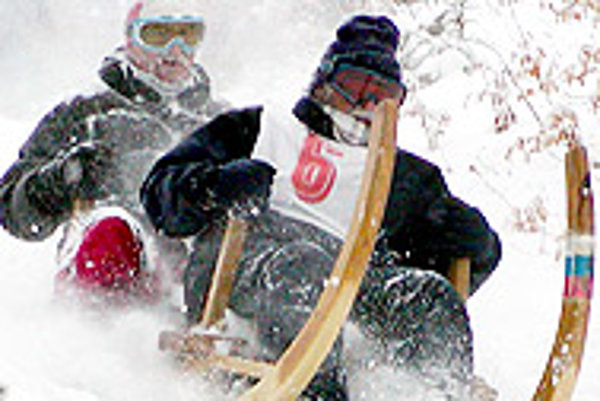 Font size:A-|A+0
KRŇAČKY, krnohy, krnohe, krnaky, krne - these are all variations describing the same thing - a traditional wooden sledge used by woodcutters for transporting logs out of remote forests.

Nowadays machinery does the job krňačky used to, but for the past 40 years or so, this remarkable means of transport is now used by sporting folk looking for an adrenaline rush.

In winter, villages across Slovakia are witness to krňačky races. Daredevils take to the wooden sledges in teams of two to see who can reach the bottom of a hill the fastest.

If you like the idea, you and your partner can enter the upcoming February 5 contest in Beňuš in Central Slovakia.

"We expect that there will be about 80 teams competing, while spectators should number about 2,000," Martin Gonda, one of the organizers of the Beňuš competition told The Slovak Spectator. Anyone who fancies their chances can enter between 8:00 and 9:30 in the morning. The competition starts at 11:00.

The competitors, often dressed in traditional folk costumes, have to slide down a steep, 1,200-metre-long narrow track in Beňuš. Since a krňačky does not have any brakes the only way that teams can slow down is using their feet. Teams can reach speeds of up to 90 kilometres per hour. Last year's Beňuš' winners completed the route in one minute and 13 seconds.

But speed and winning are only part of the enjoyment. The main aim is to have fun, meet friends and recall folk

traditions, the organizers say. Heligónka (a kind of squeezebox) players come to entertain the public and those brave enough can test their strength by entering a bruchačka competition (sawing wood with a handsaw).

The first krňačky competition took place in Turecká in 1963, as part of the Shrovetide festival when local youths wanted to try out their grandfathers' working tools.

Since then the "sport" has developed and is taken seriously. Stopwatches have replaced clocks, and nowadays, at least in Turecká, electric mowers have replaced doughnuts, homemade alcohol and wooden medals as prizes.

Teams compete for the Slovak Cup, a series of races held in different villages throughout January and February.

The track in Turecká is 1,950 metres long with an altitude drop of 410 metres. One of the organizers of Turecká's 32nd competition, to be held February 12, Michal Čillík, expects that 40 to 60 teams will enter, of which four or five might be all-female.

Last year the competition was international, when Czech, Hungarian and Russian competitors mounted their krňačky as well. The races in Turecká will start at 10:00. Teams without their own sledge can enter by borrowing a sledge from other teams - if they find any in one piece. Krňačky often do not survive the race and end up in bits!