Be sure to "Park" elsewhere

Starring: Josh Hartnett, Matthew Lillard, Diane Kruger, Rose Byrne, Jessica Pare
Directed by: Paul McGuigan
Running time: 114 min
Rating: 3 out of 10
OBSESSION has a long relationship with the movies. What other art form can so accurately capture the voyeurism and fetishism that we are capable of? It's certainly no accident that Alfred Hitchcock, probably our greatest chronicler of obsession, chose film as his medium. 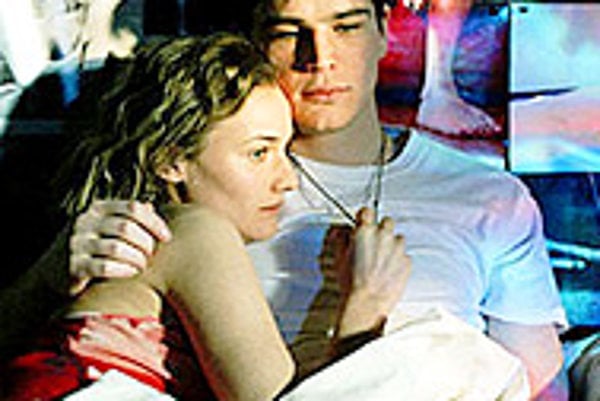 OBSESSION has a long relationship with the movies. What other art form can so accurately capture the voyeurism and fetishism that we are capable of? It's certainly no accident that Alfred Hitchcock, probably our greatest chronicler of obsession, chose film as his medium.

Hitchcock notoriously obse-ssed over his leading ladies; Janet Leigh, Ingrid Bergman, Grace Kelly, Kim Novak, and Tippi Hedren, among others, each received substantial attention from him - perhaps more than they ever wanted. But his infatuation often led to their sexiest and most intriguing roles. It also created some of film's most beautiful moments, as well as its most powerful and memorable depictions of obsession.

Thus, it's become impossible to view a movie about obsession without thinking of Hitchcock. His portly frame looms over all such movies that have come since. Occasionally, these movies - like those of Hitchcock obsessives Brian de Palma and Dario Argento - are pretty good. But more frequently they fail miserably. Like Wicker Park.

Scottish director Paul McGuigan's latest movie may have many problems, but it has two especially big ones: its stars. Josh Hartnett and Diane Kruger are both cast as objects of obsession, but they are so utterly cold and lifeless that it's inconceivable that anybody would be even slightly interested in them, much less compulsively so. So maybe Kruger has young, taut skin and Hartnett has a chiseled yet boyish face. But neither of them is exceptionally gorgeous. And this movie is about full-on, abandon-all-else desire, not mere attraction.

Hitchcock's heroines were not simply beautiful; they were also weirdly compelling: the way Grace Kelly practically floats across the room in Rear Window, and Kim Novak emerges from the shadows, eyebrow suggestively arched, in Vertigo. Kruger, by contrast, has nothing like this going for her. But it's not as if they don't try.

Her character, Lisa, is a Czech dancer. So we're supposed to see her as exotic and earthy. Instead, she's just an aloof girl with high cheekbones who speaks English with an indeterminate European accent (Kruger is German). And all the scenes of Lisa pulsating in slow motion, with ethereal music on the soundtrack and brushes of colour across the frame, cannot change this. Nevertheless, Matthew (Hartnett) is hooked. Basically, boy sees girl, boy creepily follows girl, and boy eventually meets girl. When they do meet, Lisa gently confronts Matthew about following her and then agrees to go out with him. Why she's not disturbed by the fact that he was stalking her is unclear. Such is the power, apparently, of Josh Hartnett's jaw. They fall in love, all goes well, Matthew asks her to move in with him, and then she mysteriously disappears. Distraught, he flees to New York. A couple years later, after returning to Chicago with his new girlfriend, he thinks he sees Lisa at a bar. So he obsessively tries to hunt her down by spying and breaking into apartments and hotel rooms.

Strangely, Matthew's behaviour is not presented as especially disturbing, something that is particularly problematic because there is a female character (Rose Byrne) who is not treated so generously.

Her infatuation with Matthew is not so different from his fixation; yet, she is presented as mad and delusional, while he is depicted as simply heartbroken to the point of irrationality. But the difference between them is muddy at best.

So what is good? There is one quite funny scene in which Byrne (the only actor with any appeal) and Hartnett embarrassedly wake up nude next to each other. Now, had the movie been a comedy about the awkward interactions between people inexplicably obsessed with one another, they might have actually been on to something.