AMERICANS living in Slovakia are arguably more enthusiastic about the upcoming US-Russian summit in Bratislava than the average Slovak. One thing is certain: when US President George Bush and Russian President Vladmir Putin arrive in Slovakia in February, history will be in the making. Bush's arrival marks the first time in history a standing American president has set foot in Slovakia. 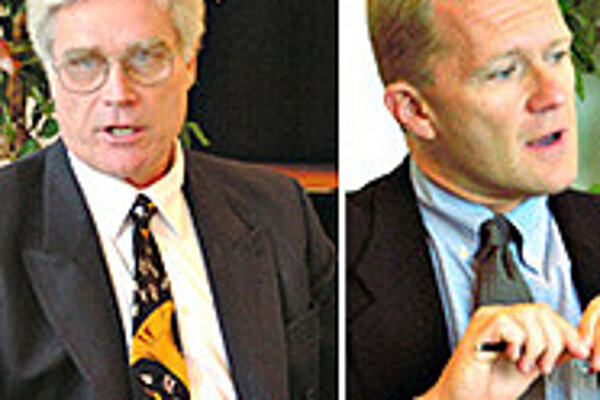 Font size:A-|A+0
AMERICANS living in Slovakia are arguably more enthusiastic about the upcoming US-Russian summit in Bratislava than the average Slovak. One thing is certain: when US President George Bush and Russian President Vladmir Putin arrive in Slovakia in February, history will be in the making. Bush's arrival marks the first time in history a standing American president has set foot in Slovakia.

Jan Surotchak and Bill Quam have something to say about Bush's imminent visit.

In an interview with The Slovak Spectator, Surotchak and Quam provide their unique perspectives on the summit, describing how Slovaks might benefit from the summit and what Bush should do as an honourable guest.

The Slovak Spectator (TSS): What concrete benefits will the Bush-Putin summit bring to Slovakia?

Jan Surotchak (JS): Although it has already made significant progress in promoting itself, Slovakia is not as well known abroad as its neighbours, which hurts the country's ability to attract tourists and investments that will help the Slovak economy to continue to grow. With these two events - President Bush's visit and the US-Russian summit on the 23rd and 24th of February - Slovakia will become the centre of world attention and go a long way to overcoming this relative disadvantage.

Building an international reputation as an innovative, dynamic country with a great tradition to offer Europe and the rest of the world is a task that takes time, and is accomplished person-by-person. This process will take a huge leap forward with the exposure that Slovakia will gain among policymakers and thousands of reporters from around the world. My experience is that once people visit Slovakia they are eager to tell other people about it, and the kind of people [coming for the summit] are in a position to tell many, many people what Slovakia has to offer.

Bill Quam (BQ): The greatest benefit for Slovakia must be the positive publicity the summit will bring to the country. Americans will now know where Slovakia is located. This in turn can lead to the possibility for increased tourism and business investments for Slovakia. More people will see what some of us have known for a very long time: Slovakia is a great place to live and do business.

TSS: In your opinion, why have the US and Russia chosen Bratislava as the location for the summit?

JS: To me, this is about more than just finding a place for Presidents Bush and Putin to meet. Much more important is that President Bush decided to come to Slovakia as an expression of the fact that the US wants to recognize Slovakia as a close ally, thank Slovakia and its people for being steady partners in the fight for freedom and democracy in Central and Eastern Europe and the Middle East (specifically in Afghanistan and Iraq), and highlight the fact that since 1998 Slovakia has been a leader in the kind of economic reform and modernization that gives individual citizens more and more opportunities they have never before had. [Bush's visit] shows that the US views Slovakia as a valued friend and partner.

BQ: Slovakia now serves the same purpose that Austria served during the Kennedy-Khrushchev summit [US President John F Kennedy and Russian leader Nikita Khrushchev held a summit in Vienna in the 1960s]. Slovakia now occupies a crossroads position on the world stage. Business flows both east and west. I think that both Russia and the US realize what an important position Slovakia fills. Slovakia is learning how to accept ideas from both the East and the West and develop an atmosphere where both positions can be successfully joined together for the benefit of all. This is true in both political and business terms. I think both Russia and the US recognize this new reality and hope they can incorporate some aspects of this new reality into the results of their summit.

TSS: Can we view the summit as another step towards visa-free entry for Slovaks to the USA?

JS: In as much as the visit will put Slovakia on the "front burner" and bring attention to the visa problem, it may help policymakers better understand the need for change. But policies on which countries are eligible for visa-free entry to the United States is set and governed by legislation approved by the United States Congress, based on a set of criteria that apply evenly to countries around the world. It is not in the hands of one US presidential administration to change. The only way for the current situation to be changed over the long-term is for Congress to rethink the limits it sets on its policies.

BQ: Thre has been much speculation, even by outgoing [US] Ambassador [Ronald] Weiser, that the US will drop the visa requirement for Slovak citizens. My feeling is that the handwriting is on the wall and it will only be a matter of time before this dream is a reality for Slovaks. I think [announcing the repeal of the visa requirements for Slovak citizens] at the summit would be an appropriate way for the US to demonstrate the progress Slovakia has made in business and the assistance Slovakia has given to the Coalition [of the Willing] in Iraq.

TSS: How will the Slovak public react to the Bush visit? Do you expect the visit to weaken some of the negative sentiments that part of the population has towards the USA?

JS: President Bush thrives on meeting and talking with regular people no matter where they are. As we saw in the campaign last year, he draws strength from conversations with the people who go to work every day [in order to] build families and homes, and I believe it will be the same in Slovakia.

The president recognizes that over history Slovaks have worked very, very hard and made great sacrifices to help build both America and Slovakia, and that they have been successful at both because they are committed to the same values that [Bush] fights for in the United States. I think [Bush] will reach out to make this clear during his visit, and I believe that Slovaks will respond positively to this message.

I suspect he will also continue to discuss the themes of spreading freedom and liberty that he laid out in his inaugural address last month, and demonstrate to Slovaks that he believes what he says when he argues that sharing freedom is a crucial component to building a more peaceful world.

We have only to look to the Iraqi elections to see this policy in practice. It seems to me that Slovaks highly value it when people tell them what they really think and do not carry hidden agendas. President Bush will make clear that he meets both these criteria and in doing so will effectively address any concerns some may have about American policy.

BQ: I think the Slovak public will react in large measure to the practical results the summit will bring to all of Slovakia. If the US were to take the bold step, the progressive step, and drop the visa requirement I think this would go a long way toward giving each and every Slovak a thank-you gift, if you will. On the other hand if Mr Bush simply breezes in and out of Bratislava without even addressing parliament and relaxing the visa requirement then I feel even more that Slovakia will justifiably feel they are not a real, full partner with America. I think it will also cause even more people to question the wisdom of remaining a coalition partner in Iraq. Some in Slovakia need just a small sign that times have changed for them, even if their financial rewards are yet to be seen.

As an organization, the Democratic Party has always been known as the "Party of Diplomacy" above all else, even when it hurts. We are very glad to see Presidents Bush and Putin address their differences in a summit, and we heartily welcome this effort. The Democratic Party also seeks to supplement dialogue with concrete action on the international stage to address more of the root causes of terrorism.

We believe America must rely far less on the military option and much more on meaningful diplomacy if we are to be secure. Some of us go even further and feel Mr Bush should adhere more to what we call our "Faith-Based Foreign Policy Initiative" that stresses the belief that all human life is precious.

We believe we must rely more on dialogue and people-centred action and far less on war or the rumours of war to take care of security or world problems. If Americans or Slovaks or Russians really want security, we must lead in the world as if people really do matter, because they do.