FEW general directors in the history of Slovakia's public television station, Slovak Television (STV), have been able to accomplish as much as Richard Rybníček. For one, the 35-year-old former journalist has led the broadcaster out of financial crisis. Excluding past debts that still strangle the station's purse strings, the STV has turned a modest profit under Rybníček's leadership.
Rybníček also revived the STV's programming schedule, triggering bitter complaints from private television stations that the STV is "neglecting its public mission" and "going commercial 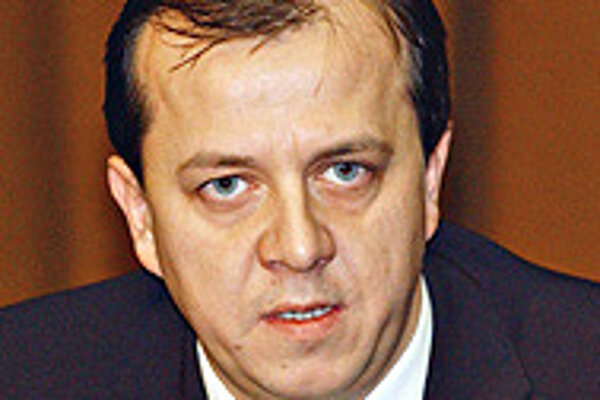 Font size:A-|A+0
FEW general directors in the history of Slovakia's public television station, Slovak Television (STV), have been able to accomplish as much as Richard Rybníček. For one, the 35-year-old former journalist has led the broadcaster out of financial crisis. Excluding past debts that still strangle the station's purse strings, the STV has turned a modest profit under Rybníček's leadership.

Rybníček also revived the STV's programming schedule, triggering bitter complaints from private television stations that the STV is "neglecting its public mission" and "going commercial". With the STV tower building about to go on the market, the media spotlight on the STV - and Rybníček - has intensified. The Slovak Spectator met with the general director in his office where he talked about the way things were - and how they are today.

The Slovak Spectator (TSS): The media reported that you have considered selling the Slovak Television (STV) tower building. Can you confirm that an international tender will be announced this year? What are the annual costs of operating the building?

Richard Rybníček (RR): We have never made a secret of wanting to sell the tower building given its catastrophic condition. We basically included the estimated value of the STV land and utilities, which is around Sk335 million (€8.6 million), as income in this year's budget. When the budget was approved we agreed to announce an international tender for the utilities and part of the land. We have since discussed selling the building as well. Shortly, we will submit a building sale proposal to the STV council and include it in the budget.

If we sell the building we want to do it in a very controlled and transparent way. Huge transactions like this have a history in Slovakia, and people will speculate on how the STV is filling its pockets. I have learned to live with such accusations, but I have learned from them as well.

We want to manage the international tender so that it brings us the greatest profit. However, we will only sell at a price based on an expert opinion, which means that a court will determine the value. Essentially, the highest bidder will win the tender.

TSS: The STV has had two massive waves of layoffs. Do you think your numbers have stabilized yet? Is there a redundant labour force at the STV?

RR: The first layoff took place in May 2003, reducing the television's wage expenses by Sk200 million (€5.2 million)annually. The second "wave" amounted to firing 42 people. Slovakia is a country where a layoff that exceeds 19 people is considered massive. I would not dramatize it this way. Going forward, the STV will not lay people off in waves but rather consider each case individually. The needs of the particular departments will be the driving force. Currently we are replacing our production software, which has brought more demands on our people.

TSS: Court losses continue to impact the financial status of the company. When does the STV expect to shake off the legacy of these trials? Is the television station planning to request assistance from the state to pay off these olds debts?

RR: For two years running we have not received state assistance for operational costs. I have said I do not want the television station to live out of the state's coffers.

The majority of the court trials are behind us; only two major ones are left: Omega, a court trial worth Sk100 million (€2.6 million), and the trial with studio BETA, which could cost us Sk700 million (€18.3 million) plus fines reaching Sk1.2 billion (€30 million). We are not in the financial situation to handle and pay for these trials. I don't think we will ever really be in a position to pay a Sk1 billion fine (€30 million).

I assume that this year or next the studio BETA trial will be resolved. We already know that the STV will have to involve the state. We are doing our best to win.

One of the court trials we lost was with Open Records. We lost Sk40 million (€1 million). I have to say that the OMEGA and Beta trials clearly show the irresponsibility demonstrated by the previous managements of the STV, including the management under the [Igor] Kubiš and [Milan] Materák era as well.

We found the television station in a crisis. The only good luck was that, as a public company, the STV could not go bankrupt like a private firm would have.

TSS: Your opponents criticize you, claiming that the STV is becoming commercial and growing negligent of its public mission. How would you define the STV's public mission?

RR: I basically define our public mission based on the following principle: one, the signal must be available to all; two, we have to satisfy a broad range of tastes and interests; three, we have to broadcast minority programmes as well as pay attention to issues that contribute to certain values regardless of popularity. Finally, we also have to support broadcast freedom and the dual system.

There have been lengthy discussions over the definition of what it means to be a public service broadcast channel. The inspiration for our mission comes from the BBC and Austria's ORF, both of which have two channels. If a public station has two channels it can hope to fulfil all of its missions.

This is how I see it: one channel can compete with private channel programmes while the other channel can broadcast minority and more demanding entertainment.

Everyone keeps agonizing over how "commercial" the STV 1 is but pays little attention to the STV 2. I must add that a TV station without viewers makes no sense to me. Perhaps the criticism would be justified if the STV only had one channel.

TSS: Are you happy with the quality of your news reporting?

RR: That is a tough question for me. I think we have made mistakes but I also think that the STV news reporting has radically improved, even if it doesn't reflect my ideal. However, my complaint with news reporting is not with the STV specifically but with the quality of Slovak journalism in general. It always hurts to hear my colleagues from print and radio criticize television reporting without first looking around their own gardens. I really think that Slovak journalism is in a bad way.

TSS: How do you evaluate your cooperation with the STV council since its members are in fact political nominees?

RR: Since Miroslav Kollár took over the council chairmanship, the operation of the body has been more dynamic and professional. He is a man with great interest in television. Besides, the council no longer has nine members but 15, and we are trying to communicate with each other effectively.

What frustrates me is that the council can focus 100 percent on the programming but tend not to see our financial and economic possibilities. I mean, some time ago there were debts climbing to billions of crowns. Today, we are running the institution with a balanced budget for the second year in a row. We are creating no new debts but this doesn't seem to interest anyone.

TSS: Have you experienced political pressures as the general director?

RR: At the beginning, certainly there were pressures to bargain with political parties. However, they shortly understood that I did not come to the STV to fulfil political agendas but turn the STV into a professional institution. I have a professional relationship with politicians, which means that I listen to their arguments and they can hear mine. The STV is no longer in party hands. The politicians themselves call for more professionalism in Slovak media. Many say they do not want anything more, only a fair and professional approach.

I am more surprised by pressures coming from different interests groups, producers and artistic organizations, which can be very unpleasant when the STV does not have money to throw to their pet projects.

TSS: The STV decision to withdraw the BBC documentary The Life of Christ from the Christmas broadcast of the STV 1 evoked lively discussion and speculation that you yielded to pressure coming from the Catholic Church. Could you tell us what happened?

RR:I have nothing to hide. I am a practising Catholic and in certain periods, like Christmas, I am more sensitive to broadcasting something that would contradict my beliefs. The STV dramaturgy included the documentary in the programme, and the head of the spiritual broadcast department, Bernadeta Tokárová, warned me that the documentary had evoked very negative feelings in the past among believers and suggested that I rethink airing it again during the Christmas season. I decided to withdraw the documentary as something not suitable for Christmastime. After I made the decision, a letter from Archbishop Ján Sokol, who protested the documentary, reached me. It was unfortunate but the media gave the impression that I pulled the documentary based on this letter. I have a clean conscience. I have never yielded to any external pressures, be it the Slovak Conference of Bishops or the Jewish Religious Communities. I decide based on my own conscience. I would never allow the Church to influence the broadcast.