SLOVAK customers can now sign landline contracts with a different telecommunications provider, thus breaking the years-long monopoly of Slovak Telecom.
Since January 27, telephone customers have been able to chose an alternative provider by signing up for Dial Telecom's "Dial 1055" service. 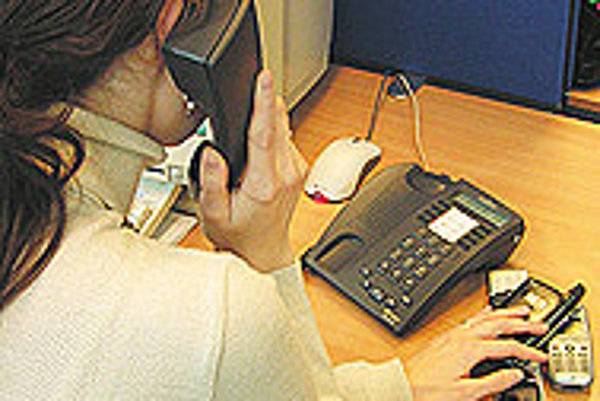 Since January 27, telephone customers have been able to chose an alternative provider by signing up for Dial Telecom's "Dial 1055" service. Customers who choose Dial Telecom (and sign a two-year contract) will receive a 15-percent discount on all phone calls made from their land line, including mobile, national and international calls. According to David Bečvář, executive director of Dial Telecom, this offer is not only valid now but "will be valid even if Slovak Telecom lowers its prices".

Dial Telecom has chosen an unusual strategy. It still does not have a interconnection contract signed with Slovak Telecom, which is needed to connect calls between two networks. Thus, customers who sign up for the Dial 1055 service will have to pay Slovak Telecom up front, then reclaim their 15-percent discount from Dial Telecom.

"We admit that the way we have launched the Dial 1055 service is non-standard. However, this is our reaction to the non-standard business conditions of the telecommunications environment in Slovakia," Bečvář told The Slovak Spectator.

He denied that the reimbursement tactic would be risky for customers. According to Bečvář, the burden of risk sits on Dial Telecom. However, the new telecommunications company looks at the discount repayments as a marketing investment in the future.

"So far, Slovakia is the only country in the EU where the telecommunications market is still not opened. But we believe that this situation won't last for too long," said Bečvář.

Slovak Telecom has been monitoring Dial Telecom's activities closely and considers their service offer to be "the beginning of the fight for the customer among alternative telecommunication providers".

Industry insiders told The Slovak Spectator that Slovak Telecom views Dial Telecom's strategy as a competitive manoeuvre. By offering the Dial 1055 service before actually signing an interconnection contract, Dial Telecom is allegedly trying to overtake other telecommunications firms that are already negotiating a deal with Slovak Telecom.

Thirteen alternative operators received contracts from Slovak Telecom and seven of them are already negotiating a deal.

Bečvář says the reason why his company does not have a contract with Slovak Telecom yet is that the conditions proposed by Slovak Telecom are such that "it is impossible to do business".

Slovak Telecom is defending its position, saying the main reason behind unsigned interconnection contracts is because "they address the interests of both negotiating sides."

According to Slovak Telecom, Dial Telecom last negotiated with Slovak Telecom in May of 2004, while two other alternative operators are very near to signing. Slovak Telecom spokesperson, Radoslav Bielka, told The Slovak Spectator: "In these two cases, a few weeks [until signing] is a realistic timeframe."

Slovak Telecom has a history of clinging to its monopoly position. The company was forced to let other dial-up Internet service providers connect into their landline networks based on a ruling by the Slovak Supreme Court.

The Anti-Trust Office confirmed that Slovak Telecom had to pay a fine of Sk20 million (€520,000) for misusing its dominant position as the nation's ADSL Internet provider. Slovak Telecom used to be a dominant supplier in the wholesale sector and wanted to use its position to set conditions in the retail sector as well.

The Anti-Trust Office is restricted in the degree to which it can intervene with Slovak Telecom practices, and only in those cases that do not fall under the jurisdiction of Telecomunikačný úrad (TÚ), Slovakia's telecommunications office.

The TÚ itself could not intervene on behalf of alternate operators before January 1, 2004, as legislation regulating the telecommunications market would not allow it. When new EU regulations were adopted in January 2004, the TÚ was able to oblige Slovak Telecom and alternative operators to enter into new negotiations regarding interconnection contracts.

The TÚ stepped into the negotiations several times and pushed through compromises made by both sides. When this was not enough to result in signed contracts, the TÚ decided to set the interconnection conditions itself.

The Supreme Court has agreed. Consequently, Slovak Telecom does not have to comply with the TÚ ruling - at least not yet.