The day of the tsunami

HUSBAND-and-wife team Tom Carter and Carolyn Davidson share the job of Deputy Head of Mission at the British Embassy in Bratislava. This Christmas they planned to spend their holiday visiting friends in Thailand, relaxing on the beach with their two sons and diving in the Andaman Sea.
It was a memorable trip in two ways. Firstly, they were in the area struck by the tsunami, but at the time had no idea about its vast devastation.
Secondly, and more importantly, they were in a position to offer assistance to British citizens in the region. They consider themselves incredibly lucky on both counts. 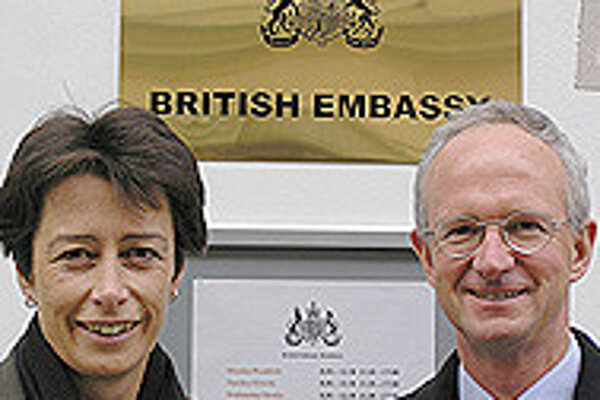 Font size:A-|A+0
HUSBAND-and-wife team Tom Carter and Carolyn Davidson share the job of Deputy Head of Mission at the British Embassy in Bratislava. This Christmas they planned to spend their holiday visiting friends in Thailand, relaxing on the beach with their two sons and diving in the Andaman Sea.

It was a memorable trip in two ways. Firstly, they were in the area struck by the tsunami, but at the time had no idea about its vast devastation.

Secondly, and more importantly, they were in a position to offer assistance to British citizens in the region. They consider themselves incredibly lucky on both counts.

The first part of their story is remarkable in that it is so unremarkable. On December 26, the couple and their sons and friends joined a boat trip to the Similan Islands. They intended to spend several days there snorkelling.

"We were watching the water carefully," Carolyn recalled, "because we were looking for flying fish." When the tsunami struck the Thai mainland at about 10:00, their party had been at sea for about an hour. "We saw nothing. We never felt the earthquake either," she added.

Their captain announced that they would be unable to land at the Similans because "the waves were too big," so they attempted to return to the mainland. But after an hour they had to turn away from the mainland too.

It was not until the Thai Navy picked them up that they began to understand what was going on.

"We had seen the navy ships earlier in the morning," said Carolyn. "They were just doing routine patrols. But after the tsunami, they began to pick up various boating parties. They took us all aboard until we received word that we could return to shore in our boat."

On the navy vessel she called her parents in the UK and got the whole story: "Of course they had been watching the news. They were terribly relieved we were all okay."

It was after 18:00 and dark when they returned to the mainland south of Khao Lak.

"We camped that night in a Buddhist temple with several hundred people," Tom explained. "Although the area was badly affected, the Thais were well-organized. A truck met us at the dock. We had food and water at the temple. There was even a makeshift hospital there," he continued. "They didn't have much, but they were treating people. Most of the injured had damage to their limbs."

The mobile phone networks were understandably overloaded that night. "But our Slovak mobile phone locked onto a less congested network," Tom pointed out. "It worked! We passed it around so much that we had to recharge it four times that night."

The area is a popular tourist destination, so tourists were affected by the disaster as much as Thais. "About 5,000 people are thought to have died in Thailand," Tom said. "And of those, over half were foreigners. The tsunami hit the beaches where the tourists were. The villages are more inland where the terrain becomes more mountainous."

Tom spoke later that evening to a Thai army officer. "He told me the Thais had a general emergency plan," he recalled. "And that became clear. They did have a plan. They really knew what they were doing."

The next day Tom and Carolyn witnessed the plan in action. "There was food and plenty of phones," Carolyn said. "There was transportation to Phuket airport, and free charter flights back to Bangkok. It was remarkable."

Not only did the government quickly rise to the occasion, but individual Thais reached out as well.

"We heard lots of stories about Thais who found tourists in need of help," she went on. "Those who were on the beach when this happened found themselves with nothing but the clothes they were wearing. And in many cases that amounted to little more than a T-shirt and a pair of flip flops. Thai families were handing out shirts, food, shoes, anything they could to help."

The couple decided that Carolyn would return to Bangkok with the children. "We arrived at Phuket airport, put our names on a list, and flew out about an hour and a half later," she said. "We were safe and together, so we felt it best to clear out and free up resources for others."

Tom stayed. While they were in the temple, he had spoken with the British ambassador to Thailand. "He was driving down to Phuket because the airport had been temporarily closed immediately after the tsunami" Tom explained.

And so Tom became part of the British Embassy crisis centre in Phuket. "We set up in a vacant office. A colleague and I took over running it so the ambassador could go to the hospitals and mortuaries as by now it was becoming clear that many British people had died," he said.

The centre became a clearinghouse for information. The phone number was broadcast in London and in Bangkok, so the lines were quickly busy with people calling to share what they knew about people who had been in the area. The process continued for days, with the information being fed back to the Missing Persons' Bureau of the London Metropolitan Police. The handful of people who had begun working with Tom grew to a staff of 40 in three days.

"Volunteers were pouring in," he recalled. "Someone would call in and say 'I have a boat' or 'I have earth moving equipment' or 'I am a trauma counsellor.' It was overwhelming."

Virtually everyone they dealt with had lost their documents. "The Embassy in Bangkok issued over 500 emergency passports," Tom explained. Eventually most of the staff settled into 18-hour shifts. By the time he left the office had grown to 80 people.

Like others who were vacationing in the region, Tom and Carolyn lost most of their belongings. But they consider themselves extremely lucky, and they are modest about their experiences. Like most of us, their thoughts have now turned to the process of rebuilding.

"I suspect donations will trail off," Tom speculated. "Yet demands will no doubt continue to rise."

"If you are disposed to help," he added, "consider doing it again in the future."