DO YOU know how many Slovaks want to win Sk2 million (€50,000)?
More than 16,000 people responded to the seductive ad for the new reality show Mojsejovci. Eager to get their hands on the Sk2 million prize money hundreds attended the subsequent castings.
In March, the final 12 selected will start a three-month stay at the villa of the wealthy Mojsejs family in Košice. There, TV cameras will monitor their every movement. The applicants' task is to convince the couple that it is he or she who deserves the money. 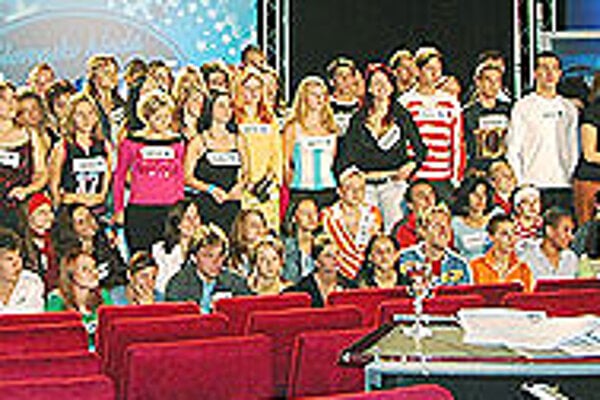 More than 16,000 people responded to the seductive ad for the new reality show Mojsejovci. Eager to get their hands on the Sk2 million prize money hundreds attended the subsequent castings.

In March, the final 12 selected will start a three-month stay at the villa of the wealthy Mojsejs family in Košice. There, TV cameras will monitor their every movement. The applicants' task is to convince the couple that it is he or she who deserves the money.

"We want to show the public what [the contestants] are willing to do for Sk2 million. We receive tens of letters every day from people begging us for money," Braňo Mojsej told the Plus 7 Dní weekly.

Not wanting to give money away for nothing in return, Braňo, a singer, and his wife, Eleonóra, a successful businesswoman, came up with the idea for the TV programme. And private station TV Markíza took them up on it.

"It's a very interesting idea for a reality show. Nothing like it has been produced in Slovakia before. We expect it to be very successful," Ivana Semjanová, head of Markíza's public relations department, told The Slovak Spectator.

Private TV station JOJ started the trend with Million Girl. Markíza came up with Wife Swap, and the public station STV gave us a Slovak version of British television's Pop Idol. Slovakia is Looking for a SuperStar has now reached its final stages and the nation is gripped.

She does not remember anything that has been so "seductively, systematically, and intensively" promoted in Slovakia.

Few can resist the temptation to watch at least bits of such programmes.

"Reality shows attract our families, friends and neighbours. To ignore them would mean being excluded from everyday conversation, from sharing emotions," Kusá explained.

"Moreover, the shows easily hold people's attention. They are dynamic and allow the public and experts to evaluate the participants. They also make people think about public taste and pique people's sense of justice," said Kusá.

The main advantage for TV stations in broadcasting reality shows is increased audiences and their share of TV advertising revenues.

"Selling commercials was problematic because we didn't know who was watching what. With the introduction of people meters that has changed. Now we can monitor audiences and schedule accordingly. Reality shows are a response to that," said Ľudovít Tóth, spokesperson for private TV station JOJ.

It was TV JOJ that started the ball rolling last September with its Million Girl. STV soon followed with SuperStar and that triggered the reality show avalanche.

SuperStar's ratings have reached 1.5 million viewers per programme, nearly a third of the Slovak population. That figure is expected to rise now the show is moving into its final stages.

The STV needed to improve its image and position in the TV market after years of mismanagement. They had to come up with a programme that was both popular and high quality.

The reality show strategy has certainly worked. But in choosing this particular format the station has faced accusations of pandering to commercial considerations.

But Branislav Záhradník, a member of the STV management, does not think that the STV is shirking it public service charter: "The fact that we found several significant talents that will shake up the stagnant waters of Slovak pop-music is in compliance with the STV's public mission.

"Also, since the viewers pay our fees, the audience figures justify it. They are our 'shareholders' and their will is decisive for us," he explained.

The high audience figures prove that what works elsewhere also works in Slovakia.

"The same things entertain Slovaks, other Europeans and Americans. Of course, Slovaks prefer to see Slovak participants who they can identify with. That's what the reality show concept is based on," said Tóth of JOJ.

Differences in viewers' preference can be put down to people's lifestyle and social level rather than national identity.

Bratislava computer programmer Tibor Kovács, 29, said he would not want to watch Mojsejovci, but could not resist SuperStar.

"I think SuperStar has made me watch TV more often," he said.

He was attracted to the programme because it is difficult for young singers to get a break in Slovakia. He enjoys seeing young talent given a chance. "Moreover, it proved that my choice is identical with the majority."

The huge number of entrants in SuperStar, 3,678, far exceeded the expectations of the STV management.

Sociologist Kusá also expressed surprise. "We think of Slovakia as a rather conservative country. Many people live in small municipalities hemmed in by quite strong social control and strict conventions."

The huge interest in taking part in SuperStar suggests that the world of television functions under different rules than the rest of society, according to Kusá.

"TV also has the power not only to legitimize unusual behaviour but also to raise one's importance. Many young people are attracted to the contests by this power, especially in countries where there are few opportunities to succeed."

Kovács, who first saw reality shows on German-speaking television, was astonished that people would exhibit themselves and discuss their personal lives so openly on television.

"The question of privacy was quite a sensitive issue during Communism. And suddenly we have programmes that openly discuss very private matters," he explained. "I don't think I have fully adapted to the change yet."

According to Kusá, it will take some time before reality shows become the norm on Slovak television, as has happened abroad.

But she believes that reality shows have led to a wider discussion in society on issues such as consumerism and morality, and led to a greater sense of community.

"These discussions show that society is not passive, but has the ability to react and defend itself," she said.