Welcome to the art factory

BRATISLAVA has its first hall for contemporary art.
The former factory halls at Studená 12 near the Zlaté piesky recreation area are large and roomy. Constructed for functional reasons they are very flexible - the perfect space for exhibiting, creating and talking about contemporary art.
The former factory has now been turned into a massive exhibition area by Tranzit, an art initiative dedicated to fostering emerging talent. 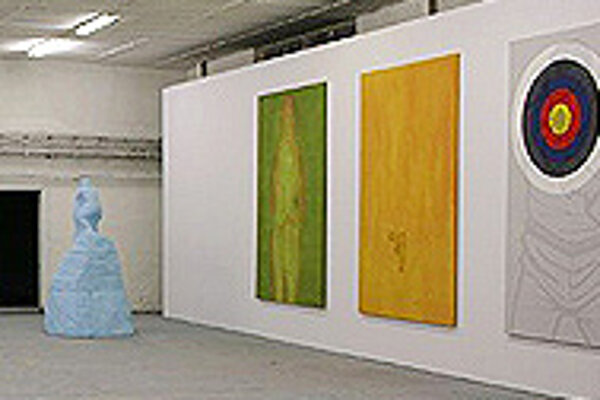 Font size:A-|A+0
BRATISLAVA has its first hall for contemporary art.

The former factory halls at Studená 12 near the Zlaté piesky recreation area are large and roomy. Constructed for functional reasons they are very flexible - the perfect space for exhibiting, creating and talking about contemporary art.

The former factory has now been turned into a massive exhibition area by Tranzit, an art initiative dedicated to fostering emerging talent.

"We were searching for a large exhibition space that would not be too expensive to rent and look good, but not be too fancy," says Laco Terén, of Tranzit.

The 1,500-square-metre space currently houses the Forever Hungry! exhibition. It is a display of works by 14 Austrian, Czech and Slovak upperclassmen at art academies who know exactly what they are doing and where they are going.

The large space is perfect for exhibiting their huge paintings and sculptures.

However, Palo Macho, another Tranzit member, says, "We don't want to limit [Studená 12] to just exhibitions."

Terén explains that the name Tranzit is suggestive of the organization's aim of transiting the established formula of exhibiting just one kind of art.

"We are trying to combine a wide range [of art forms] so that the fine art community doesn't remain isolated. We want to add music, theatre, philosophy lectures, literary readings and creative workshops, performed by foreigners as well as locals.

"There's been nothing like an [artists' fund] network operating in Slovakia. If we found anything, it didn't work properly. We want to patch up this network and bring it to the point where it connects and works in all [artistic] directions."

Tranzit's sponsor, represented in Slovakia through Slovenská sporiteľňa, is the Erste Bank Group of Austria, which is where the idea was first spawned in 2001.

Ironically, the first countries to actually put the idea into practice were Slovakia and the Czech Republic. "Curiously, the process is operating in reverse. After it has its rationale confirmed here, it will return 'home' to Austria," Terén says.

How it all started

The Studená 12 project started thanks to Macho, who lives in the area and rented the first hall in spring 2004. "Laco [Terén] and I needed a space for our activities," Macho explains.

The halls once belonged to Štrkopiesky, which produced gravel, but are now owned by the nearby Shopping Palace.

The two artists spent the whole summer in the hall. While working on their own art they came up with the idea of renting the other halls as well.

In autumn 2004 they rented another two halls. Two months later, after the halls had been renovated, the first exhibition was put on.

"I dare say that there is not such a large exhibition space anywhere else in Slovakia," says Terén, while explaining that the large size was more or less a coincidence.

Similarly unplanned was the large and easy entrance that makes the galleries accessible to wheelchairs.

The artistic duo was joined by another artist, Boris Ondreička, who is helping to bring other projects to Studená 12.

One is an exhibition that surveys art from the central European context, curated by Austrian Hedwig Saxenhuber, entitled Parallel Actions, scheduled for September.

Another is a show by German photographer Wolfgang Träger, prepared for June. Träger has been taking pictures of artists at work for more than 20 years and has formed an enormous collection. This will be the first time he has exhibited the photographs.

The large space and the simply constructed halls that can be used so flexibly and spontaneously make Studená 12 an ideal place for artists.

For example, when working on her five-by-three-metre painting Los Zapotes, Juliana Mrvová, a student at the Ivan Csudai atelier and the curator of the currently running display at Studená 12, rented scaffolding from construction workers at the site and then painted her piece on the spot.

A work by Erik Šille, displayed on the outside of one of the halls, is four metres high by 22 metres long. "It's obvious that a work like this couldn't be exhibited just anywhere," says Mrvová, the curator.

Apart from artistic ambitions the organizers also aim to convert the area around the popular summer recreation spot of Zlaté piesky. What they have in mind is a park or arboretum, so that the people who go there can combine relaxation with art.

Support for this ambitious idea has come from the nearby Shopping Palace.

"Our company is interested in supporting art in Slovakia. We expect the Tranzit artists to attract the people of Bratislava with their art and bring them to Zlaté piesky. We plan to build a centre of free-time activities there and we believe that art will be an integral part of that," says Anna Jančová, director of Shopping Palace.

It looks like Studená 12 will not only be a focal point for contemporary art in Slovakia but also part of the essential infrastructure around the Zlaté piesky lake.

Studená 12 is located behind the Shopping Palace to the west of the Zlaté piesky lake. Turning into Studená Street from Cesta na Senec, (close to the junction of Vajnorská and Rožňavská), go round the partly-painted Shopping Palace buildings and soon you will see a Studená 12 sign directing you to the first hall.