THE MUCH-heralded Penal Code bill was withdrawn from parliament after additional changes to the Justice Ministry's draft softened the proposed legislation. According to Justice Minister Daniel Lipšic, the draft law would have created an "Eldorado for the mafia" in Slovakia. 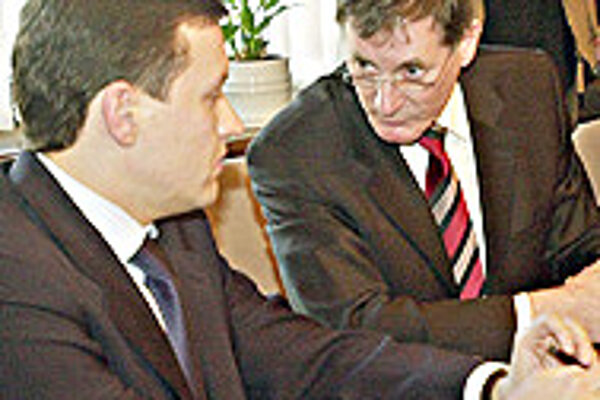 THE MUCH-heralded Penal Code bill was withdrawn from parliament after additional changes to the Justice Ministry's draft softened the proposed legislation. According to Justice Minister Daniel Lipšic, the draft law would have created an "Eldorado for the mafia" in Slovakia.

The new Penal Code would have replaced the country's 40-year-old crime legislation. Lipšic and his team worked extensively for years to overhaul Slovakia's Penal Code and related Penal Order. However, parliament members approved several changes to the original bill, causing the Justice Minister to withdraw it from the floor.

Opposition as well as ruling MPs pushed the changes through parliament despite the government having already approved both laws in their original form. The Justice Minister expected the coalition to back the ministry's drafts.

One change that made Lipšic particularly uneasy was an amendment put forth by ruling Slovak Democratic and Christian Union (SDKÚ) MP Peter Miššík. From a certain paragraph in the Penal Code that mentions "the heads and supporters of crime groups" as people punishable under law, Miššík proposed omitting "and supporters".

"Such a change would limit punishment to the godfathers of crime groups, but those active in favour of these groups would no longer be punishable under law. I will never accept this," Lipšic said at a press conference held in parliament February 8, shortly after the changes were passed.

Another problematic change pushed through by MPs resulted in removing crime preparation from the list of punishable criminal offences.

The minister decided to withdraw the Penal Code as well as the related Penal Order from parliament. The original Penal Code draft bill is likely to be resubmitted to parliament in March so that the law can take effect at the beginning of 2006, as planned.

The last-minute changes to the Penal Code draft law by Miššík were supported by SDKÚ members (including party boss and Prime Minister Mikuláš Dzurinda), members of the opposition Movement for a Democratic Slovakia (HZDS) and a few independent MPs.

According to Milan Hort, the head of the SDKÚ's parliamentary caucus, the party did not expect the proposed change would present such a big problem for the justice minister.

"With respect to this paragraph [on the accountability of criminal founders and supporters], the minister never communicated major reservations at our meetings," Hort said following a coalition council meeting, a senior political body composed of ruling party representatives.

Amending the Penal Code to prohibit criminal prosecution of supporters of crime groups, however, has an interesting twist with respect to the SDKÚ.

SDKÚ MP Libuša Martinčeková is currently being prosecuted in a case involving an extensive oil scam, which the police suspect is tied to organized crime. Martinčeková also voted to strike "and supporters" from the Penal Code paragraph in question.

The SDKÚ rejects all allegations that the proposed change had any relation to Martinčeková's case.

Political analyst Soňa Szomolányi from the Comenius University's Political Sciences Department considered it unlikely. "It is doubtful that the SDKÚ would risk this for one MP," she said.

Szomolányi said that the moment she heard the news of the SDKÚ's proposal, her first reaction was, "I don't understand."

Szomolányi speculates that there is more to the issue than meets the eye.

"After all, there were hundreds of changes proposed to the Penal Code. I think there is probably more to this [particular change], but what that is exactly, I don't have enough information to judge."

The SDKÚ's changes not only angered the Justice Minister, a member of the ruling Christian Democratic Movement (KDH), but also the remaining two coalition parties that voted against the paragraph change.

The New Citizen's Alliance (ANO) and the Hungarian Coalition Party (SMK) admitted they were disappointed with how the SDKÚ voted. "I think what we hear now [from the SDKÚ] is just excuses," said ANO MP Ľubomír Lintner.

"I must say I am not surprised with the SDKÚ's proposal, but I am disappointed. This suggests to me that although we might find a compromise solution over the matter ahead of the repeated vote, for some time to come parliament will lack a real will to deal with organized crime groups," he told The Slovak Spectator February 9.

KDH chairman Pavol Hrušovský, who is also the speaker of parliament, said that the SDKÚ voting pattern has shown that the party is "going away from the ruling coalition and moving closer to the HZDS".

Hrušovský also said that the "SDKÚ failed to fulfil the cabinet programme" against organized crime.

HZDS MP Katarína Tóthová confirmed that HZDS representatives considered Lipšic's Penal Code draft law to be incomplete and insufficiently prepared. According to her, the changes ahead of the vote confirmed that there are problems inside the ruling coalition.

According to Hrušovský, "[Dzurinda] said he would try to convince his parliamentary caucus [to drop the change] so the Penal Code could be passed. We'll wait and see whether his words turn to deeds."

Analyst Szomolányi is confident that the coalition will not part over the issue.

"Like many times in the past, and probably several times to come in the future, these problems will not cause the split of the coalition. They all know very well that there is no alternative [except to get along]," Szomolányi said.