SLOVAKIA and seven other central European states have joined in an initiative called the Decade of Roma Inclusion (DRI). Supported by the World Bank and the Open Society Foundation (OSF), the goal of the initiative is to help Roma communities break free from poverty, discrimination and harsh social and economic conditions. 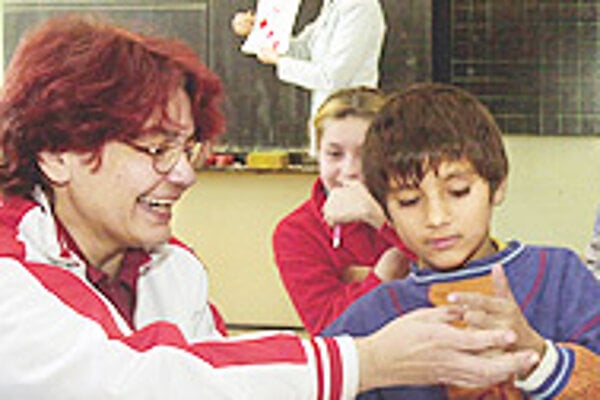 Font size:A-|A+0
SLOVAKIA and seven other central European states have joined in an initiative called the Decade of Roma Inclusion (DRI). Supported by the World Bank and the Open Society Foundation (OSF), the goal of the initiative is to help Roma communities break free from poverty, discrimination and harsh social and economic conditions.

At an official meeting held February 2, representatives from Slovakia, Czech Republic, Hungary, Romania, Croatia, Bulgaria, Macedonia and Serbia and Montenegro signed a common declaration marking the start of the DRI.

"We announce 2005 to 2015 to be the Decade of Roma Inclusion. We pledge to support the participation and engagement of the national Roma communities to achieve the goals of the DRI, the progress of which will be measured by results stemming from the implementation of action plans of the DRI," reads the official declaration signed in Sophia, Bulgaria.

According to Klára Orgovánová, Slovak cabinet plenipotentiary for Roma communities, both the World Bank and the OSF have "already spent hundreds of millions of US dollars on projects helping the Roma".

The Decade of Roma Inclusion took a year to prepare. The states that joined the DRI acknowledged that the "Roma are a group under the threat of exclusion - or already excluded - from their societies", Orgovánová told the press February 7.

"The Decade of Roma Inclusion will give us a platform to discuss our various national experiences in helping the Roma and exchange tools for Roma inclusion, protection and desegregation," she said.

Orgovánová added that Slovakia has experience with Roma inclusion efforts, both successful and failed. "This is thanks to the fact that Slovakia has had a self-contained policy relating to the Roma community since 1991."

According to a recent survey published by Orgovánová's office January 11, 2005, Slovakia has 320,000 Roma out of a population of 5 million. Around half of the Roma live integrated among the majority population.

The remaining half live in urban and municipal concentrations, settlements situated on the outskirts of municipalities or in settlements that are physically divided from villages or towns by natural or artificial barriers, such as railways or creeks.

The Roma have traditionally belonged to the most socially and economically deprived groups in Slovakia and greater Central and Eastern Europe. Roma are less educated than the rest of Slovak society, their health is worse and they continue to face prejudice on the job market. Ingrid Brocková from the World Bank in Slovakia says that when describing the Roma community, the word "poverty" comes to mind first.

"Poverty can be found in various forms among Roma. There are around six million Roma in Central Europe, and five million of them live in the new EU member states. Our vision and hope is to solve their appalling social and economic condition," she said.

The Decade of Roma Inclusion is organized around four main subjects: education, employment, health and housing.

In the fight to improve the Roma situation during the DRI, the Slovak government will follow guidelines set forth in its most recent cabinet strategy session, said Orgovánová.

"It is also important that we fight against discrimination and ongoing stereotypes regarding the Roma. We are aware that this is not an easy job. But our effort is to eliminate prejudice and increase the solidarity of majority societies with the Roma," Brocková added.

Around Sk1.5 billion (400 million) was put in reserve in the 2005 state budget to support the Slovak National Action Plan and DRI. Orgovánová noted, however, that the money would be used to help the Slovak population as a whole, rather than exclusively for Roma.

Alena Pániková, executive director of OSF in Slovakia, said the DRI project is important because it represents an official pledge of national governments to deal with the problems facing its Roma inhabitants.

"The biggest bulk of work lies with the governments. Every government should take care of their community. It is therefore important that the cabinet showed readiness and will contribute to improving the situation of this group of people," Pániková said.

A special committee, sponsored by the OSF, helped plan the DRI. Other participants included specific Roma communities themselves.

"There are dozens, hundreds of people in Slovakia who work on the improvement of Roma's lives and whom the OSF supports," said Pániková.

(For more on the topic, please see the interview with Ivan Veselý on page 10.)