So you think it's easy doing business in Slovakia?

INTERNATIONAL financial reporting standards (IFRS) are taking root in Slovakia, introducing worldwide standards into Slovak financial reporting and making it easier for companies to do business across borders. The big advantage of IFRS, say experts, is that compliance allows an investor from Korea, for example, to easily understand the financial information of a Slovak company. 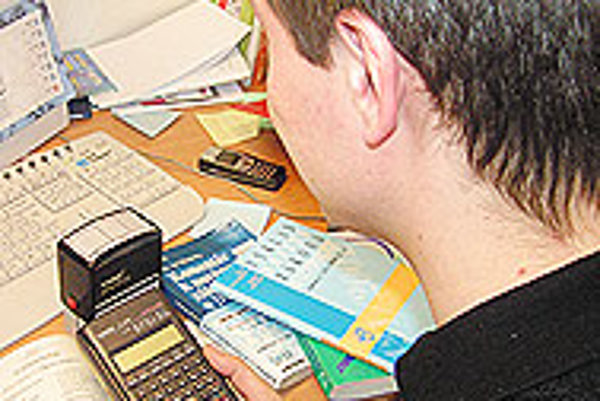 Font size:A-|A+0
INTERNATIONAL financial reporting standards (IFRS) are taking root in Slovakia, introducing worldwide standards into Slovak financial reporting and making it easier for companies to do business across borders. The big advantage of IFRS, say experts, is that compliance allows an investor from Korea, for example, to easily understand the financial information of a Slovak company.

While Slovakia has made important progress in adopting IFRS (see facing article), legal differences - and some difficulties - remain. The Slovak Spectator spoke to local representatives from three international leaders in the financial business advisory space to get a professional point of view. Together, they provide interesting insight into Slovakia's journey towards IFRS compliance, and the challenges ahead.

The Slovak Spectator (TSS) Why is the introduction of IFRS so important? What advantages does it bring to institutions and companies?

Wolda Grant and Ľudmila Buzgová (Deloitte): The growth and integration of global markets brought about the need to harmonise financial statements worldwide. The International Accounting Standard Board, based in London, has stated that its mission is the development of consistent, high-quality global standards in the public's interest; which are therefore easily understood and applicable in day-to-day usage. These standards are known as IFRS.

With significant cross-border investments, there is a demand for a financial reporting framework that is understandable to all. The big advantage of IFRS is that it allows, for example, an investor from Korea to understand the financial information of a Slovak company.

Even if local accounting standards of a particular country are similar to IFRS, if they are not fully compliant, the differences could potentially result in a significantly different impression of the financial position of a company. IFRS provides, in many cases, industry-tailored solutions in leasing and banking, for example, that various local GAAPs (Generally Accepted Accounting Principles) may be lacking. As such, it also facilitates consistent application within the industries.

TSS: Is the introduction of IFRS a lengthy legislative process only in Slovakia? Or is it a challenge for other developed countries as well?

Indeed, we have seen that the recent changes in Slovak accounting legislation have contributed to a situation where Slovak companies are understanding of, and flexible in adapting to, such changes. Many Slovak companies have practical IFRS experience, having prepared financial statements under IFRS for a number of years to satisfy the demands of various stakeholders.

Of course, conversion from local accounting standards to IFRS will require substantial human, technical and financial effort. Good preparation is critical to the success of the conversion process, particularly in view of significant recent changes to IFRS that have resulted in 13 amended and five new standards.

WG and ĽB (Deloitte): The adoption of IFRS is not only an issue for the Slovak Republic, but also for all countries that follow national accounting regulations that are different from IFRS. In the implementation of IFRS, Slovakia is ahead of a lot of countries, even certain developed countries in the EU.

In general, upon the implementation of IFRS, accounting legislation must first be modified, then IFRS must be translated into the national language (if different from English), then the public, the accounting profession and any other interested parties must be educated.

In several countries, governments allow companies listed on the national stock exchanges to prepare IFRS consolidated financial statements (e.g. Australia, Germany, the UK). Step by step, the US and Canada have also started discussions on the benefits and implications of using IFRS on US stock exchanges. These developments represent a further move towards the worldwide dissemination of IFRS use.

AP and IK (PricewaterhouseCoopers): The history of the Slovak Accounting Act, in its current "entrepreneurial" form, is relatively short. Since first published in 1993, the law has gone through several development stages. Because Slovak accounting practises were lacking guidance in many complex accounting areas, Slovak accountants applied IFRS practices as "best practice", as they provided the best solutions. In comparison, countries such as Germany and France have a long history of accounting legislation; consequently, application of IFRS in these countries was not necessary in the past.

The transition to IFRS, however, may bring many surprises and adjustments to local financial statements and nobody should underestimate the accounting and systems changes needed to implement IFRS.

TSS: What are the main barriers to introducing IFRS in Slovakia - for large companies as well as medium and small enterprises? What are potential solutions from your point of view?

MD (Ernst & Young): There is a danger that first-time adopters might underestimate the complexities of the transition process and the planning and preparation time required. There are a number of significantly different financial accounting and disclosure requirements in IFRS that will likely result in material financial reporting differences for first-time adopters.

To meet these accounting and disclosure requirements, it will be necessary for many Slovak companies to redesign their internal management reporting systems so that they might be capable of generating the financial information required.

In order that the transition to IFRS might be effective, I would recommend first-time adopters to establish a project team to design, manage and control the transition process.

The project team would assess the effects of IFRS on the company and, through investing in people, knowledge and technical support, address key issues such as training, reporting principles, accounting policies, systems design and testing, process changes and internal and external communications.

WG and ĽB (Deloitte):Up until January 1, 2005, only a small number of companies prepared financial statements under IFRS. As a result, a significant number of companies do not have any experience with IFRS. Another problem is that, at present, Slovakia only has the [Slovak] translation of the 2000 International Accounting Standards. The official [Slovak] translation of the latest publication - the 2004 International Financial Reporting Standards - which materially differs in terms of content compared to the previous publication, is not yet available.

IFRS will apply equally to all companies. Large companies have an advantage in the IFRS implementation process because they can either employ IFRS specialists or train their own staff. But all companies will be faced with increasing costs for the implementation of IFRS, which will require changes in accounting systems, qualified accounting staff and a continuous education programme for finance and economic personnel. In addition, certain areas of IFRS require specialists - actuaries to calculate employee benefits or finance specialists to calculate the fair value of derivative instruments, for example.

One thing is clear: in the near future, there will be a big demand for qualified IFRS accounting personnel and IFRS-related services.

AP and IK (PricewaterhouseCoopers): Many of the large companies in Slovakia (such as Slovnaft, Slovak Telecom, Slovakofarma, and others) already prepare IFRS financial statements. Full transition to IFRS should not be such a complex process for them.

Key problems could include a lack of knowledge about IFRS; an absence of a local IFRS regulatory body to provide guidance; and the costs and complexity of IFRS implementation.

TSS: What are some of the main philosophical differences between Slovak accounting and reporting standards and IFRS?

MD (Ernst & Young): The key conceptual difference between Slovak accounting and reporting standards and IFRS is the application of the substance over form principle.

Under IFRS, transactions must be accounted for with reference to the substance of the transaction, rather than with reference to particular legal or formal arrangements to the contrary. Other significant differences between Slovak accounting and IFRS relate to the methods of accounting for equity investments, leasing and goodwill amortization. In addition, the disclosure requirements under IFRS are more onerous than those under Slovak accounting, and the presentation of financial statements prepared under each basis of accounting is significantly different.

WG and ĽB (Deloitte): The new accounting law in Slovakia has reduced the number of differences significantly. However, the main differences that remain include: 1) the full implementation of the substance over legal form principle; 2) the presentation of the primary statements (Slovak standards require a prescribed format of balance sheet, income statement and notes while IFRS requires a balance sheet, income statement, cash flow, changes in equity and notes where there are requirements only for the minimum information that must be presented); 3) segment information; 4) derivatives and financial instruments; 5) earnings per share information; 6) and impairment of assets.

Certain provisions of IFRS related to financial instruments were already incorporated into Slovak accounting regulations, but to a very limited extent. Thus today, many questions are being raised in respect to the classification, recognition and valuation of financial instruments.

AP and IK (PricewaterhouseCoopers): Slovak accounting and reporting standards are based on the same underlying assumptions (accrual basis, going concern) and qualitative characteristics (such as understandability, materiality, prudence, comparability) as IFRS.

However there are still many differences between Slovak standards and IFRS. The main ones include: transactions are presented under IFRS in accordance with their economic substance and not merely their legal form composition of financial statements.