Realizing the view before him

HE rejects repetition. He always looks to the future, though gives an occasional glance to the past.
"I look through the rear-view so I remember what I've passed," says Miroslav Cipár, one of Slovakia's most versatile artists. 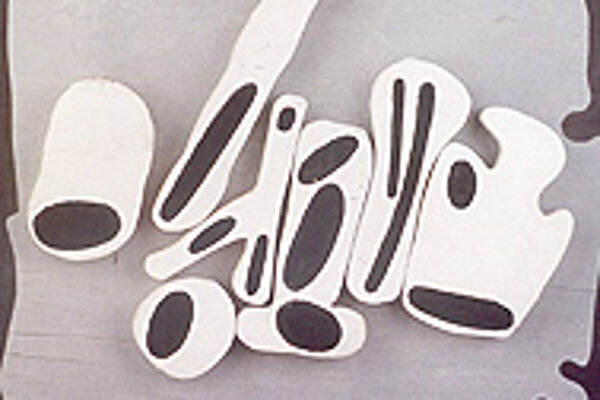 Font size:A-|A+0
HE rejects repetition. He always looks to the future, though gives an occasional glance to the past.

"I look through the rear-view so I remember what I've passed," says Miroslav Cipár, one of Slovakia's most versatile artists.

In a career stretching back over 45 years it is not easy to count the number of works he has created or prizes he has collected.

Cipár celebrated his 70th birthday with an exhibition in the northwest town of Žilina. But this is no retrospective.

The current exhibition shows Cipár's latest works. Best known as an illustrator of more than 200 books, Cipár steps out as an installation artist, painter and sculptor.

"The focal motif of his installation is the wooden enclosure," says the exhibition's curator Fedor Kriška, "a fence, which is a metaphor for all the borders, barriers, and iron gates that are firmly embedded in our consciences.

"Is the world better without fences or safer with them?" Kriška asks, a question exhibition visitors can reflect on for themselves.

Apart from the large fence installation there are dozens of other works, including Cipár's perforated flat-figure sculptures and relief paintings. Part of the exhibition is also dedicated to the artist's famous logo designs.

The motif of fences is a revisit to Cipár's early years. He comes from a rural environment, the tiny village of Semeteš in Vysoká nad Kysucou. Fences played an important role in the artist's childhood. They divided and protected territories; be it gardens, fields or courtyards.

"It was all wooden and I was fascinated by observing the wood aging with time's passing. There were notes stuck on the fences, things inserted to stop them from falling," Cipár recalls, casting a glimpse into the past.

As a keen collector of oddities, he was inspired by the effects of time on these fences. What looked aged and worthless on the outside was to Cipár actually precious, like gold that has lost its colour with age.

Fences were initially a source of purely visual inspiration for Cipár.

But as the artist matured they unveiled other meanings. From being merely functional, the fence turned into a metaphor for the inner, psychological barriers that stop us from realizing our full potential.

Cipár came to think of the clean painter's surface as an enclosure he needed to break out of. His pictures started to swell into relief forms and sculpture. From there it was only one step to the Žilina fence installation.

At 70, the still energetic and briskly humorous

Cipár feels no reason to stop. "I feel no limitations. I climbed a hill and a magnificent view opened up in front of me. My plans and opportunities multiplied and now I am restless and want to start completing them."

Other places to see works by Cipár

A HUNDRED of Cipár's paintings and drawings are on exhibition in Heidelberg, Germany, until the end of March. The show will move to Munich April 26. Other paintings will arrive at the Kysuce Gallery in Čadca March 4 and an exhibition of illustrations will be put on display at the French Institute in Bratislava in the autumn. Work is also in progress on the second part of a monograph about his work, which he plans to present during the Biennale of Illustrations Bratislava 2005.