For once, believe the hype

Sideways
Starring: Paul Giamatti, Thomas Haden Church, Virginia Madsen, Sandra Oh, Marylouise Burke
Directed by: Alexander Payne
Running time: 126 min
Rating: 9 out of 10
EVERY YEAR has its overhyped movies that make critics swoon and moviegoers chatter excitedly. Usually, they fail to live up to their promise. But occasionally something truly great appears that warrants all the attention. At the moment that movie is Alexander Payne's Sideways. 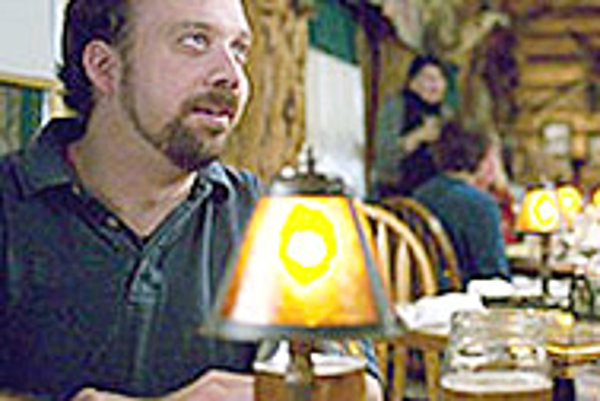 EVERY YEAR has its overhyped movies that make critics swoon and moviegoers chatter excitedly. Usually, they fail to live up to their promise. But occasionally something truly great appears that warrants all the attention. At the moment that movie is Alexander Payne's Sideways.

This is not to say that it hasn't had detractors - hype always attracts critics. New York Times film critic AO Scott recently called the movie "the most overrated film of the year". He acknowledged its wit and superior acting, but claimed that it was basically every male critic's fantasy and thus fell short of being the Hollywood masterpiece that most claim it to be.

Masterpiece is perhaps too strong a word, but to ultimately dismiss the movie as a critic's fantasy is to misunderstand its relationship to its characters. It presumes that the characters' faults are meant to be seen merely as amusing quirks, when in fact Payne wants us to see them as severe obstacles.

Scott's critique refers specifically and almost exclusively to Miles (Paul Giamatti), the protagonist. An aspiring novelist and an eighth grade English teacher, he's also an extremely depressed amateur wine critic who regularly drowns his many sorrows in far too many glasses (or bottles) of pinot noir.

Scott argues that many reviewers have responded so strongly to the movie because they have found so much of Miles within themselves. The old cliché is that critics are those who aren't talented enough to create. Though obviously a sweeping generalization, it is true that critics tend to be sarcastic, negative, and sometimes curmudgeonly little bastards who act as if their opinions are somehow more important than those of everyone else.

Miles is an exaggerated version of this. What is crucial, though - and what Scott seems to overlook - is that we viewers (and we critics) are meant to find his behaviour absurd and infuriating, not admirable. We may love him and empathize with him, but not without feeling intense frustration and disgust.

What makes Miles so easy to identify with - flaws and all - is Giamatti's amazing performance. Like the movie as a whole, he effortlessly flows from brilliant deadpan humour and slapstick to painful sadness and hysterical bouts of anger. He's just as comfortable communicating with subtle gestures of his mouth and eyes as he is with manic bursts of his body and voice.

What further sets Sideways apart is that its supporting cast is more than worthy of Giamatti's greatness. Thomas Haden Church is perfect as Jack, Miles' charming but completely irresponsible and hedonistic old college roommate whose marriage is rapidly approaching. Miles takes him to Northern California's wine country for one last pre-marital jaunt. Jack views the trip as his last chance for strings-free sex, and hopes to get Miles lucky as well. But Miles, still reeling from his divorce two years earlier, wants a quiet week of wine and golf.

As the sexy and sassy Stephanie, the object of Jack's desire, Sandra Oh nicely complements Church. Miles' desire is directed at Maya, a divorced waitress/horticulture student whose knowledge and love of wine is equal to his. She's played beautifully by Virginia Madsen, still luminous at 41, who finally seems to have landed a role worthy of her talent.

That Miles will get Maya is by no means a foregone conclusion: He's far too riddled with hang-ups and insecurities. That we desperately want him to, despite his many faults, is a testament to Giamatti's and Payne's talent and generosity.

They've created a wondrous little movie that, like any good pinot, at first seems colourful and tasty but, when given time to breathe, proves full of far more subtle and lasting flavours.