A NEW survey of public attitudes to a possible coalition between the ruling Slovak Democratic and Christian Union (SDKÚ) and the opposition Movement for a Democratic Slovakia (HZDS) has angered the former party, which dubbed the poll a "deliberate manipulation" of public opinion. 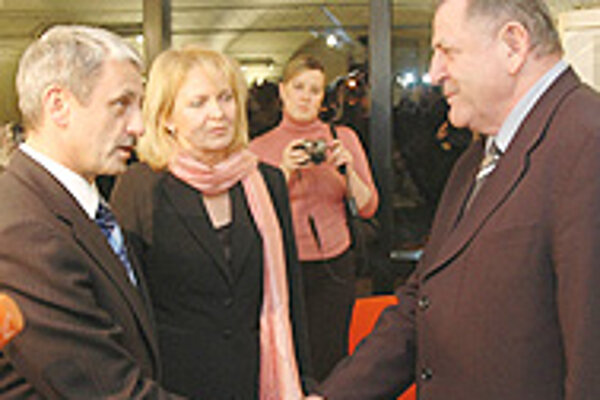 Font size:A-|A+0
A NEW survey of public attitudes to a possible coalition between the ruling Slovak Democratic and Christian Union (SDKÚ) and the opposition Movement for a Democratic Slovakia (HZDS) has angered the former party, which dubbed the poll a "deliberate manipulation" of public opinion.

The poll, conducted by the MVK agency, showed that 54 percent of all registered voters are against a ruling coalition composed of the SDKÚ and the HZDS. The two parties and their actors have traditionally been antagonists on Slovakia's political scene.

The poll also specifically gauged the views of each party's voters to such a coalition, and found that 60 percent of SDKÚ supporters and 56.7 percent of HZDS voters disapproved.

Although there are still 18 months to go before national elections scheduled for 2006, speculation on a deal between the governmental SDKÚ and opposition HZDS, led by Slovakia's controversial ex-prime minister, Vladimír Mečiar, is already rife.

While on several recent occasions the parties have voted together in parliament, they deny accusations that they have forged a deal on regular cooperation.

The SDKÚ, furthermore, accused the polling agency of trying to manipulate public opinion.

"It's bewildering that the MVK is examining public attitudes towards only this possible coalition. This amounts to misleading public opinion," the SDKÚ said in a statement to The Slovak Spectator on February 11.

A few days later, however, a similar poll was published examining public attitudes towards another possible coalition, this one comprising the HZDS and its opposition rival, the Smer party.

In the statement sent to the Spectator, the SDKÚ's secretary-general, Ivan Harman, said he had no idea "on what facts those who prematurely connect the SDKÚ with the HZDS base their predictions of what political parties will win seats in parliament after the next national elections."

He added that "the creation of an impression of a coalition agreement between the SDKÚ and HZDS in the middle of an electoral term" amounted to a "deliberate manipulation of public opinion that only serves the SDKÚ's political opponents".

"No SDKÚ representative, no SDKÚ body, has ever confirmed such a possibility," said Harman in the statement.

The authors of the survey rejected the criticism, however.

The MVK's Pavel Haulík said: "Surveys are a source of information. Voter surveys tell us what voters think and how they see the political situation. Even though there are 18 months remaining to national elections, this topic [of possible coalitions and alliances] has now surfaced in the public's mind, and that's why we did the survey.

"People see what's happening on the political scene. Weighing up possible coalitions is a legitimate thing for all political parties to do. It's a reality, [although] the SDKÚ probably doesn't want this to be discussed in public so far before elections," he said.

"It's also common that parties themselves have surveys carried out of public views of potential coalition partners, and I have no doubt that the SDKÚ has had such a survey done as well," Haulík added.

"After all, [Finance Minister and SDKÚ member] Ivan Mikloš said it clearly to the SPEX magazine recently, so I don't quite understand why they're so nervous about it."

Mikloš said in the February issue of SPEX that "If [Robert] Fico's Smer insists it will revise reforms, and at the same time Mečiar's HZDS has no problem maintaining these reforms, I would unequivocally support a coalition with Mečiar and Mečiar's HZDS".

After local media cited the quote, in a manner that Mikloš alleged was out of context, the Finance Minister explained to the SME daily on February 16 that "the statements and the activities of the Smer party, unlike those of the HZDS, suggest clearly today that they want to radically change reforms that have already been implemented, that they have views on economic policy that are fundamentally different from those of the SDKÚ and the other parties in the current coalition."

Like their SDKÚ counterparts, HZDS officials also rejected suggestions of a possible agreement between the two parties.

"I deny the existence of any such agreements or contracts," HZDS deputy chairman Ján Kovarčík said.

"It is obvious, however, that a certain relationship is being created. Perhaps the SDKÚ has realized that many of the steps that the HZDS took in the 1994 to 1998 electoral term [when the HZDS lead the government and Slovakia was dropped from NATO and EU entry talks because of Mečiar's authoritarian behaviour - ed. note] were in favour of Slovakia," he said.

According to Kovarčík, however, the publication of the poll was not a bad thing.

"We have now entered the second half of the electoral term, and therefore I don't think it's too early to discuss possible coalitions," he said.

"Parties should be prepared in terms of their possible coalition partners. It's important that future ruling parties do everything in their power to ensure Slovakia's further progress. Currently, however, no coalition can be excluded. The only thing I would say for sure is that the [parliamentary opposition] Communist Party of Slovakia will not be in the next government. But apart from the KSS, everyone can be considered," Kovarčík said.

The second survey showed that HZDS voters would be happier if their party joined Smer in a future coalition.

Kovarčík was cautious regarding a possible coalition between his party and Smer. The relationship between the two opposition parties is seen as complicated by prickly relations between their leaders - the HZDS' charismatic Mečiar, and Smer's Robert Fico, an ambitious left-wing politician who is among the most trusted political actors in Slovakia, according to recent polls.

Kovarčík, however, said that the relationship between Smer and the HZDS was far more complex than the state of relations between its two leaders.

"The relationship between Smer and the HZDS is not dependent on the relationship between the two parties' leaders, although it is often simplified in such a way. I must say that problems in our relationship are also visible at the regional level. I'm afraid that a certain amount of mistrust among the HZDS will remain regarding Smer's reliability. We are very cautious regarding a possible coalition with Smer," he said.