No longer "hostage" of his homeland

AS THE FIRST Slovak ambassador to the US, Branislav Lichardus was in the unenviable position of managing the sometimes difficult communication between the formerly undemocratic Slovak Republic and the US. According to the US State Department, however, Lichardus was a true diplomat "maintaining a reservoir of good will and strong friendship" during his tenure. 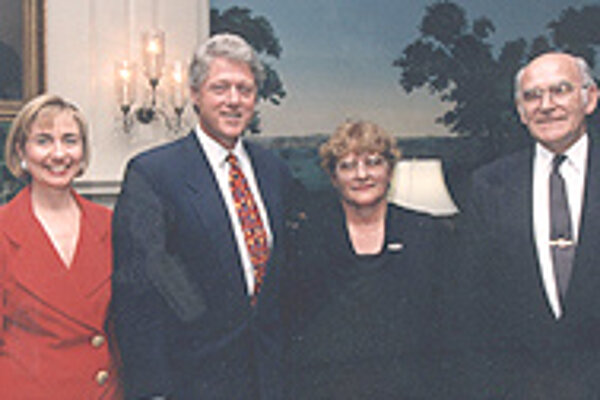 Font size:A-|A+0
AS THE FIRST Slovak ambassador to the US, Branislav Lichardus was in the unenviable position of managing the sometimes difficult communication between the formerly undemocratic Slovak Republic and the US. According to the US State Department, however, Lichardus was a true diplomat "maintaining a reservoir of good will and strong friendship" during his tenure.

The Slovak Spectator talked with former Ambassador Lichardus about his mission to the US from 1994 to 1998, and how US-Slovak relations have changed over the years. Lichardus suggested that if the Dzurinda government had been in power during his ambassadorship, he would have had a much easier time promoting Slovak government policies to his host country.

The Slovak Spectator (TSS): How have US-Slovak relations progressed over the last decade? What are the most important political milestones of that period?

Branislav Lichardus (BL): I would rather speak about a period of seven years, starting in autumn 1998, when Vladimír Mečiar's government was replaced by a coalition of four parties headed by Mikuláš Dzurinda. This period is a textbook example of the unity between domestic and foreign relations; in other words, it's an example of how domestic policy reflects itself in international relations overall.

My feeling is that an ambassador is a hostage, if you will, of his or her mother country and needs to promote various aspects of its government policy to the host country. This is much easier to do with the Dzurinda government. When it came to power, not only did the Dzurinda government declare as part of its political programme that its main goal was obtaining full-fledged membership for the Slovak Republic in NATO and the EU, but also - and this was at variance with its predecessor - started to deliver accordingly, by striving to meet the Copenhagen criteria [political and economic criteria for EU membership] for democratization.

The main change in US-Slovak relations happened when Slovakia was accepted into NATO and the EU, and its ensuing political and military partnership with the "Western democracies", namely with the United States.

TSS: How do you recall the time you served in Washington? How would you characterize the atmosphere of your mission?

BL: I served in the United States from March 1994 until September 1998, during the Presidency of Michal Kováč and the premierships of Jozef Moravčík and Vladimír Mečiar. Slovakia started in Washington, DC from almost nothing, since the Czech Republic inherited the former Czechoslovak Chancellery and the Ambassadorial Residence after the split of our country. On top of this, the new Slovak Republic was considered disruptive to an important Central European state with an excellent democratic and economic reputation from the period between the two World Wars.

The Slovak part of the former Czechoslovakia was also perceived as economically weak; add to this the burden of the legacy of having both a fascist and anti-Semitic regime during World War II [Slovak State 1939-1945], and you get some idea of what we faced.

Our task therefore was to establish the best possible working relations between Slovakia, represented by the Slovak Embassy, and the highest US political representation - the White House, the US Congress, the Pentagon and other institutions of the US administration - to improve Slovakia's reputation.

Visits to the US by the Slovak president, the chief justice of the Constitutional Court, the governor of the Slovak National Bank and the general staff of the Slovak Army, which were co-organized and strongly facilitated by the Slovak Embassy, were very important in this respect. The US considered these Slovak representatives and their offices as institutions honouring democratic principles. Also important were the diplomatic contacts with foreign diplomats, influential newspapers and electronic mass media, including CNN, several high-profile think tanks, Slovak-Americans, industrial circles, the Jewish community and others.

At the same time we reconstructed our offices on Wisconsin Avenue, purchased the Ambassadorial Residence in McLane, Virginia and initiated the construction of a new building for the Chancellery. The time I served in Washington was challenging, and our efforts to represent Slovakia were accepted and appreciated by US officials and foreign diplomats in spite of the fact that our government was permanently criticized by the US Administration, due to its disregard for the Copenhagen criteria.

The US State Department best summarized my mission with the following: "The test of a true diplomat is often not what he does when things are going well, but how he performs under more difficult circumstances. Perhaps to your regret, you have been given that opportunity more often than we all might like, but you have passed the test with flying colours."

TSS: What in your opinion are the greatest changes Slovakia has witnessed?

BL: The greatest change is Slovakia becoming "one of the most dynamic reform countries in Central and Eastern Europe" to cite then-NGO leader Pavol Demeš, in spite of the fact that several years ago we were seemingly losing the momentum of democratic transformation. This says something about the previously suppressed potential of Slovaks to face historic challenges with honour, and represents a promise regarding the further development of our country and its peoples.

BL: The relative importance of Slovakia concerning US-European foreign policy stems from its membership in NATO and its geographical position in the heart of Europe, thus being a land and air crossroads for Central, Eastern and Southern Europe. Having coexisted with other countries in this region, Slovakia could potentially serve as a mediator for transatlantic and European policy, extending democracy, the rule of law and free-market economics to the former communist countries. Suitable examples for such a role are the engagement of Slovak activists supervising the fairness of the recent presidential election in Ukraine, as well as elections in Serbia and Georgia.

TSS: Slovaks hope that President Bush will relax visa regulations for the Slovaks. Do you see it as a realistic hope?

BL: It is probably not, unfortunately, a realistic hope for the time being. But it would be of mutual benefit if the US government would support the exchange of students and scientists and thus promote the development of an informed society for the 21st century. This would surely be a substantial contribution to the successful expansion of democracy throughout the world.

Professor Branislav Lichardus was the first Ambassador of the Slovak Republic to the United States of America (1994-1998). He also served as president of the Slovak Academy of Sciences (1992-1995) and since 2000, rector of the Vysoká škola manažmentu (College of Management)-City University Programs (Bellevue, Washington).