Eurotrip... not! Capital comes of age

IN HIS TEEN romp entitled Eurotrip, American filmmaker Jeff Schaffer paints Bratislava as a hellhole where hostile dogs reign, trains do not function and foreigners can buy pretty much anything for a dollar and change. 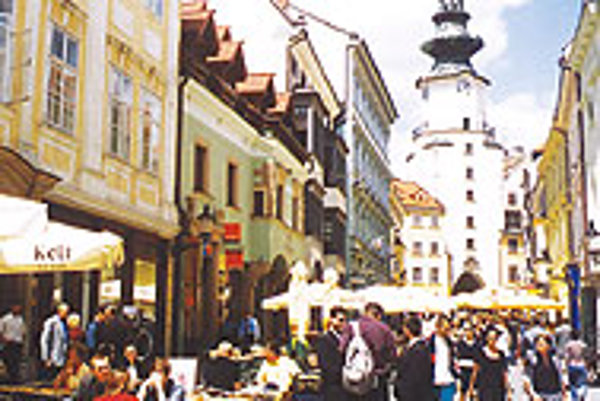 Font size:A-|A+0
IN HIS TEEN romp entitled Eurotrip, American filmmaker Jeff Schaffer paints Bratislava as a hellhole where hostile dogs reign, trains do not function and foreigners can buy pretty much anything for a dollar and change.

The film's humorous treatment of European stereotypes (with plenty of nudity and bad taste) is not meant to be offensive but funny. Historical facts and cultural knowledge clearly have little to do with the plot, and viewers recognize this within the first few minutes.

Stereotypical impressions of Bratislava are one reason that representatives of the capital city see the upcoming Bush-Putin summit as the perfect public relations event. It is an opportunity to redefine the Bratislava and place it in an appropriate historical and cultural context.

Milan Vajda, spokesperson for Bratislava Mayor Andrej Ďurkovský, says the summit represents "a once in a life-time chance" for Slovaks to break the bias and stereotypes about Slovakia and the Slovak capital.

If only a fraction of the journalists in town for the summit sketch a realistic picture of Bratislava, says Vajda, "they will do more in one and a half days than the country's tourist strategies have done over the past four years".

Logically, local summit organisers in Bratislava see visiting news agencies and reporters as an influential target audience, and they intend to provide the journalists with practical and essential information on Bratislava.

City representatives plan to erect a large information booth at the official press centre at Incheba Exhibition Hall, which is located on the right bank of the Danube, across from the Bratislava castle. At the booth, press releases will be available and Bratislava mayor, among others, will preside over press conferences.

The topics planned for discussion include an influx of new foreign direct investment on the Danube's embankment, the construction of modern tram transportation, and recent cooperation between Bratislava and the nearby Austrian capital, Vienna. Typical Slovak food and live jazz will help create a festive air.

Over the last two years, city officials have presented Bratislava abroad as "The Little Big City". The slogan was chosen for two reasons.

As one of the youngest capitals in the world, Bratislava has a very "human dimension" compared to other, more sprawling capitals. Bratislava does not plan to significantly exceed 500,000 people anytime soon, and most of the institutions worthy of sightseeing are within walking distance of each other.

"It would be difficult to find a capital equal to Bratislava, where a person can get off the boat in the harbour and, inside a five-minute's walk, take in a first-rate philharmonic, in another two minutes stand inside the national theatre, and in other four dine in a top restaurant in the town's historical centre," Vajda says.

Bratislava also has a 2,000-year-old wine tradition, which is being revived thanks to the Small Carpathian Wine Road project. Adding to its vibrancy, Bratislava is a city of young people, home to eight universities and 60,000 students.

"Few capitals in Europe are also university towns. It's an advantage when young, dynamic people come to Bratislava from all over the country and we can remain a cosy yet cosmopolitan city," Vajda says.

Bratislava alone accounts for 25 percent of the tourism in Slovakia, followed by the alpine mountain region, the High Tatras. Bratislava is appropriately the "gate" to the rest of the country, says city officials. Plans to start cooperating with the rest of Slovakia are in place, especially with the western regions, since Bratislava is not "big" enough to spend more than a couple of days.

The proximity of Vienna and Budapest to Bratislava is another advantage for tourists.

With its short distances ("little") and the quality of its venues as well as its economical success ("big"), Bratislava continues to flourish on both a local and international level.