THE GOTHIC castle at Modrý Kameň, a small town situated on the southern Slovak Krupinská planina (plateau), dates back to the early 12th century. 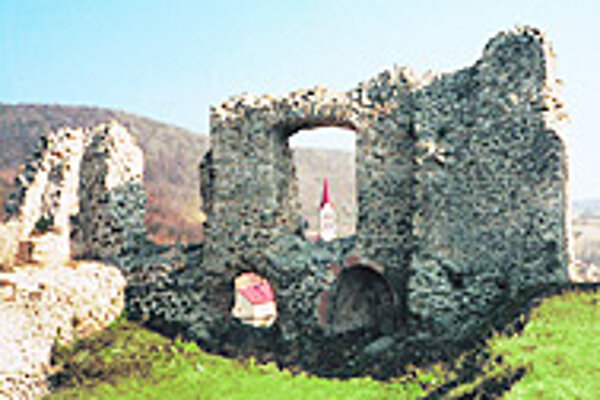 Font size:A-|A+0
THE GOTHIC castle at Modrý Kameň, a small town situated on the southern Slovak Krupinská planina (plateau), dates back to the early 12th century.

The castle stands on a rock at the foot of the Kalvársky Hill, which adjoins the Krupinská planina. It (modrý means "blue") was probably named after the greyish-blue porous tufa rock on which it was built. In those days language probably did not distinguish between shades of the same colour.

The first known owner of the castle was the governor of Zvolen, Ditrich of Spiš.

Ditrich (also known as Detrik or Detre) is documented as Modrý Kameň's owner in a royal document from 1236 when - under the reign of Belo IV - the castle took on significance as an anti-Tatar fortress.

In 1321 King Karol Róbert gave the Balaša family the castle as a donation to family properties in Modrý Kameň. It stayed in the family until the first half of the 19th century.

Over the centuries the Balašas counted royal adjutants, governors, poets, anti-Turkish warriors, doctors, dukes and knights of the road among the family.

In the middle of the 15th century, Modrý Kameň became the camp of Ján Hunyady, who gathered support for the battles against Jan Jiskra of Brandýs there. Some Hungarian legends claim that Hunyady's son, Mathias Corvinus, spent several nights at Modrý Kameň castle. He is supposed to have stopped there on his way from Vyšehrad to Zvolenský Wood where his own castle and deer forest were.

In 1526 Hungary came under attack from the Turks in the Battle of Mohacs, beginning one of the saddest chapters in Hungarian history.

Modrý Kameň was located in a strategic position and so it became an important point in the anti-Turkish defensive line. This comprised 35 fortresses stretching from Muráň to Nové Zámky.

The Turks tried unsuccessfully to seize Modrý Kameň several times. They finally succeeded in 1575 when the allied troops of Fiľakovo, Sečany and Novohrad sanjaks and the troops of the Budín pasha Mustafa Sokoli attacked the Modrý Kameň castle.

The troops of the Hungarian commander-in-chief of the Danube military district, Šimon Forgáč, that were gathered in the camp between Zvolen and Vígľaš, failed to come to the rescue in time.

The castle's defenders, led by Peter Romháň, made a desperate plea to the governor of Zvolen for help, but it was too late. The castle fell to the invaders.

One legend attached to the invasion is that a local traitor showed the Turks the best vantage point from which to attack the castle. To this day he is known only as "Judas".

The Turks stayed in Modrý Kameň for almost 20 years. From the castle they controlled the surrounding district of Novohrad. Their aim was to stay in the region for good.

But the Hungarian emperor was determined to retake Modrý Kameň. After several unsuccessful attempts the Hungarian forces, led by the emperor's commander, Krištof Tiefenbach, managed to conquer the Turkish forces in 1593. Modrý Kameň was back in Hungarian hands. From 1609 to 1612 the castle underwent repairs led by Žigmund Balaša. In 1683 another series of battles began at the castle. In 1694, it was destroyed by fire, caused by the surviving members of the Kuruci army, which was staying at the castle.

Although the Upper castle remained in ruins, in 1730 Gabriel Balaša built a Baroque mansion house on the grounds of the Lower castle. Later a descendent of Gabriel, Ondrej, built a chapel in the mansion dedicated to St Ann, a patroness of the Balaša family. In the middle of the 19th century the history of the Balaša family at the Modrý Kameň castle came to an end.

The next owner was the Duke of Halič, Forgách. He reconstructed the outer side of the mansion and placed a commemorative plaque on it.

In the late 19th century Modrý Kameň passed into the hands of the family of Károly and in the early 20th century Károly's daughter, Gabriela Almáši, became the owner. It was Gabriela who in 1923 donated the mansion and the whole estate to the state of Czechoslovakia.

The mansion has served as the residence of various institutions: district administration office, district court, labour office, prison, archive or medical storage house. Since 1991 the Slovak National Museum's Marionettes and Toys museum has been housed there.

The castle remains a popular tourist destination. In the winter time it is open Monday to Friday from 8:00 to 15:00.