MINUTES after concluding their summit talks at Bratislava Castle, US President George W Bush and his Russian counterpart Vladimir Putin told an eager clutch of journalists that they found many issues to agree on during their meeting. However, the only unambiguous accord between the leaders is that neither superpower wants North Korea or Iran to have nuclear weapons. 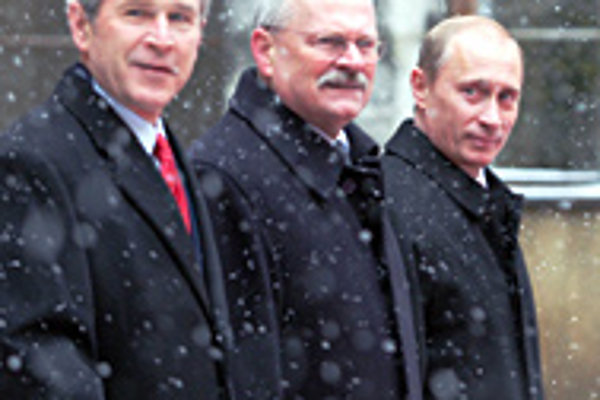 Font size:A-|A+0
MINUTES after concluding their summit talks at Bratislava Castle, US President George W Bush and his Russian counterpart Vladimir Putin told an eager clutch of journalists that they found many issues to agree on during their meeting. However, the only unambiguous accord between the leaders is that neither superpower wants North Korea or Iran to have nuclear weapons.

The presidents described their summit talks in Bratislava on February 24 as "instructive" and "constructive", each using the same two words repeatedly.

Bush conceded to help accelerate Russia's membership into the World Trade Organization while Putin stated that his country is "ready for a reasonable compromise".

In the summit post-mortem, the international press expressed great interest over whether Bush openly communicated his concerns regarding what many perceive as the erosion of democratic principles in Russia.

The presidents' answers suggested that he and Putin have a different idea of how democracy is practised.

Bush stressed that all nations, including Russia, must respect the values inherent in democracy: the rule of law, the protection of minorities and viable political debate, among them.

Putin responded by saying that for Russia, democracy is about the possibility of making democratic laws and giving the state the power to enforce those laws.

According to Putin, Russia made a choice for democracy 14 years ago, without outside pressure, and does not intend to go back.

"Any kind of turn towards totalitarianism for Russia would be impossible, due to the condition of the Russian society," he said.

Putin made clear that Russia would not invent a special kind of Russian democracy; rather, it would observe the fundamental principles of democracy that are already established.

He did, however, seem to defend his country's perceived strong hand, saying that democracy should not be implemented so that the state collapses or its citizens' grow impoverished.

"I personally believe that the implementation and the strengthening of democracy on Russian soil should not jeopardize the concept of democracy. It should strengthen statehood and it should improve living standards for the people. It is in this direction that we're going to act," Putin concluded.

As a result of the Bush-Putin summit, Bratislava has became the cradle of an important international agreement.

The arrangement provides a bilateral framework for cooperation controlling shoulder-fired, anti-aircraft missiles. According to an official news release issued by the US Department of State, such weapons "can threaten global aviation if obtained by criminals, terrorists and other non-state actors".

The agreement will allow the two countries to share information about MANPADS sales and transfers to third countries.

Though political analysts say that the Bush and Putin tried hard to present the results of their talks as a success, the only clearly stated agreement was their effort to limit the spread of nuclear weapons.

The former Slovak ambassador to the United States, Martin Bútora said that mentioning Iran was an interesting development and a positive outcome of the summit. Bútora is also the honorary president of the Institute for Public Issues, a local think-tank in Bratislava.

"It was a new thing that Iran was mentioned at the press conference. It is not that Russia supported a nuclear-equipped Iran, but about a week ago, Putin transmitted a different political signal towards Iran.

"It seemed that he was extending some kind of support.

"This new agreement between Bush and Putin means that we can expect Russia to be more intensively involved in containing Iran," Bútora told The Slovak Spectator.

Bush and Putin also talked about the safety of Russian nuclear power plants and similar problems.

According to Bútora, after September 11, 2001, a temporary alliance emerged between the United States and Russia.

"I think this period is over. Now it's time for a more pragmatic partnership on global issues," Bútora said.

Jan Surotchak of the International Republican Institute Office for Eastern and Central Europe also thinks the agreement of the US and Russia over Iran and North Korea is significant.

"We should watch how it plays out in practice. Such an agreement is probably more complicated to realize than to say. However, it is important to start," Surotchak told The Slovak Spectator.

For Surotchak, the most significant result of the summit is that Russia's perception of democracy was thrown into question. But Surotchak says that it is wise to see how Russia responds in the long run.

Now that all is said and done, Slovakia is analyzing how the host country handled the summit. Organizers should feel happy that they avoided any major faux pas and serious disturbances during the event.

Juraj Marušiak, a foreign policy analyst with the Slovak Academy of Sciences, told The Slovak Spectator that the foreign media were happy with the level of organization and the equipment provided to them at Incheba Exhibition Hall.

"The summit was well handled. The fact that it took place in Slovakia is a major event, as is the first visit by an American President. The summit will definitely increase Slovakia's reputation and prestige in foreign policy circles," he said.

"With the international media's focus, Slovakia naturally swam into the world of big politics. The success of the summit has earned Slovakia a global image as a stable and reliable country, perfectly modernized and equipped to stage such events," Zala told The Slovak Spectator.

Surotchak also commends Slovakia on its handling of the role of host.

"Slovakia is well known for many things, and one is its great hospitality. My sense of all of the visitors I spoke with, American or otherwise, was that everybody is extremely pleased. People who hadn't been here before were impressed with Bratislava and Slovakia, and I suspect they will carry that home, to their own countries. That's one of the long lasting effects of the summit," Surotchak told the Spectator.