"MR PRESIDENT Bush, allow me to introduce you to my fellow countrymen, who came to this square to welcome you," Slovak Prime Minister Mikuláš Dzurinda said, facing thousands of Slovaks who had come to Hviezdoslavovo square to hear the American president speak. 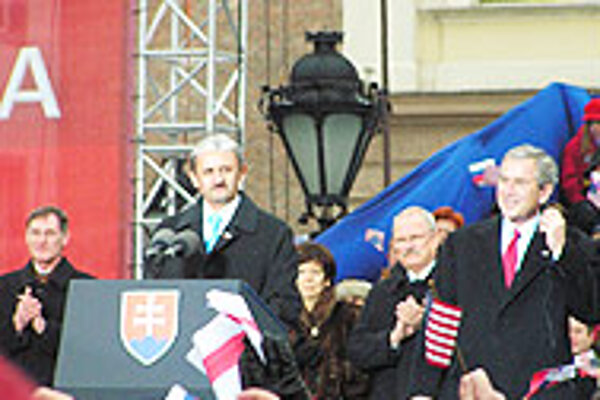 Font size:A-|A+0
"MR PRESIDENT Bush, allow me to introduce you to my fellow countrymen, who came to this square to welcome you," Slovak Prime Minister Mikuláš Dzurinda said, facing thousands of Slovaks who had come to Hviezdoslavovo square to hear the American president speak.

Before making introductions in the square on February 24, however, Dzurinda and Slovak President Ivan Gašparovič each had a private interview with President Bush. Many topics were discussed, ranging from North Korea to visa policy.

Dzurinda has been setting the stage for the Bush visit for the past several weeks. Repeatedly he has said that Bush's visit is a confirmation that the US is a staunch ally of Slovakia, and that America appreciates the democratic progress that the central European state has made.

The ruling government's support for Bush is no secret. In a brief press statement on February 24, Dzurinda summed it up as follows: "I told President Bush that there are many reasons why the democratic world at large, including Slovakia, my home, needs to have a strong president of the United States. And I'm very, very happy that President Bush is really a very strong and courageous leader."

Dzurinda added that it was a historic day for Slovakia, which continues supporting the United States in many areas, including its policies on Iran and North Korea.

In a short press conference after the conclusion of his official meetings with both Dzurinda and Gašparovič, President Bush said that he had been looking forward to his trip to Slovakia. He complimented Dzurinda on putting policies in place "that have helped this economy grow."

Bush also thanked Slovakia for the troops it supplied to Iraq and Afghanistan.

"The Prime Minister understands that those of us who are free have a responsibility to help free others in order to make ourselves more secure. I'm so honoured to have your commitment."

Knowing that the Slovak public attaches great important to the possibility of the US lifting or easing its visa policies for Slovaks, Bush confirmed that PM Dzurinda had requested a "better visa policy for Slovakia."

"He [Dzurinda] made the case very clearly on behalf of the citizens of Slovakia," Bush said.

"We will work with the Slovak government to reform the visa policy - reform in a way that conforms with the desires of our Congress, but nevertheless, the Slovak people should see a different visa policy coming out of the United States because we've now got a road map that we both must work on," Bush told the press. During talks with Gašparovič, Bush praised Slovak activities within NATO and the Slovak mission in Iraq, the news wire TASR reported.

The Slovak president assured Bush that there is no reason for Slovakia to withdraw its troops, but that reinforcement is not being considered, either. The visa issue also found its way into their discussions. Gašparovič talked to the press about the US-prepared road map for the liberalization of US visa policies in Europe.

The visa topic is particularly important to new EU member countries, including the Slovak public. Nine of the 10 accession states need to secure visas before travelling to the US. More established EU members can obtain visas on arrival. According to the daily SME, the US can consider lifting visa restrictions only for those countries where less than 3 percent of applicants are denied. In Slovakia, around 10 percent of applicants are turned away. Local analysts had warned the Slovak public not to expect bold announcements about the visa regime by Bush during the summit.

"Obviously, nothing more than a diplomatic statement [can be expected]," Ivo Samson, a senior researcher with the Slovak Foreign Policy Association in Bratislava, told The Slovak Spectator shortly before Bush's arrival.

"We'll wait to see what message President Bush brings [about visas] to Central Europe," the Czech ambassador to the US, Martin Palouš, told the ČTK news agency.

The message Bush gave to the Slovaks is vague, but Slovaks are interpreting Bush's commitment to "make travelling to the US easier for Slovaks" as a definite move forward. However, Dzurinda reminded his fellow citizens that Slovaks are equally responsible for ensuring visa policies are changed.

Slovaks will have to contribute to the solution by observing US rules and not overstaying their visas in the United States, he said.

The champions included an 86-year-old Slovak, a Belarus woman searching for those who have "disappeared" in her country, and a Georgian member of parliament who campaigns for press freedom. The former Slovak ambassador to the US and a key activist in the Velvet Revolution, Martin Bútora, and Pavol Demeš, the director of the Bratislava office of the German Marshall Fund of the United States, also attended.

Georgian MP George Bokeria, who founded the non-governmental organization The Liberty Institute, spoke passionately about the importance of US help to the Caucasus republics.

Irina Krasovska from Belarus, who founded the We Remember Foundation, which is dedicated to stopping political repression, thanked Bush for US support for Belarus during its fight for democracy.

Alexander Bachnar, now in his eighties, was a commander of a Jewish partisan unit that fought against fascists during the Slovak National Revolution.

During the summit, protest movements were small and scattered. Approximately 50 people protested while George Bush gave his speech. They stood at the opposite end of the square from where President Bush was holding his address.

Most of the protesters were young and covered their faces with scarves. They tried to interrupt Bush's address by blowing whistles and crying "terrorist, terrorist".

The protesters held aloft banners. Some urged Bush to "Go Away".

The demonstrators were completely outnumbered by fully equipped riot police. The forces of law and order formed a ring three-deep to prevent the protesters from getting closer to the president. However, they did not try to stop the protest. The Slovak Communist Party organized another protest against US President Bush. This protest attracted approximately 100, mostly older people. The communists complained that the US had taken the position of "world policeman".

No matter what happens on the visa front, the summit must be viewed in wider context, analysts agree.

Martin Bútora, honorary president of the Institute for Public Affairs, told The Slovak Spectator that regardless of agreements reached between the summit holders themselves as well as with their host, the event was extremely important for Slovakia.

"People switching world television channels often saw the Bratislava castle and Slovakia on the screen. Maybe people will still mistake Slovenia for Slovakia, but their number will be fewer," Bútora told The Slovak Spectator.