MOVE over McDonalds. For a dose of American culture, Bratislava residents will soon have access to InfoCenterUSA, which expands and updates the former American Studies Room of the capital's main library. 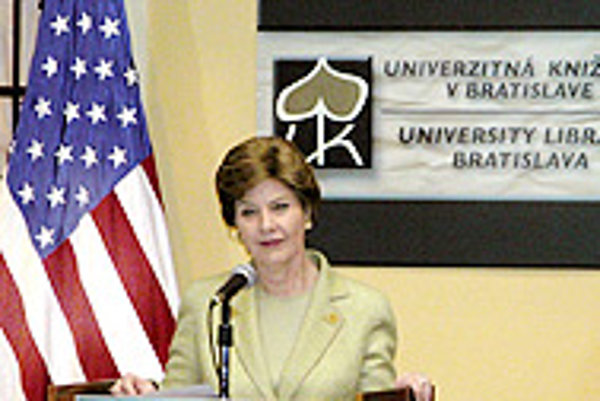 Font size:A-|A+  Comments disabled
MOVE over McDonalds. For a dose of American culture, Bratislava residents will soon have access to InfoCenterUSA, which expands and updates the former American Studies Room of the capital's main library.

Housed in a spacious room on the first floor of the newly refurbished University Library, the "American corner" will open its doors when the building, closed since 2002 for renovations, officially reopens April 14.

As a former librarian, First Lady Laura Bush was the guest of honour at a ceremonial opening held February 24.

"Just a few weeks ago, when we decided to host a space for InfoCenterUSA, how could we have known that such a distinguished guest would attend its ceremonial opening?"

Trgiňa took obvious pride in the refurbished library premises - with good cause. The state-of-the-art computer terminals somehow blended seamlessly with the detailed, turn-of-the-century architecture. A violin duet, hired for the occasion, complemented the sophisticated yet friendly atmosphere. Patrons who remembered the library in previous times remarked on the transformation.

Before giving up the podium to Laura Bush, Trgiňa called InfoCenterUSA an "information gate into the culture of America". He also gave a short history of the University Library. Established in 1919 and situated in Bratislava's historic district, it is the oldest scientific library in Slovakia.

For her part, Laura Bush seemed at ease in her "distinguished" role in front of the 120 or so people who had gathered for the early morning event. Wearing a big smile, she spoke easily to a bevy of well-dressed academics, patrons of the arts and journalists.

"There is no greater pleasure for a librarian than to help open the doors to a new library. Libraries are important to the progress of all people in all nations. Libraries allow the free exchange of ideas, which is vital to democracy."

Although Laura Bush spoke as a diplomat - for example, thanking her Slovak hosts for welcoming President Bush and indicating that Slovakia and America are "bound by common ideals and common values" - she allowed some personality to shine through.

"President Bush was not surprised when I told him that my first stop in Slovakia would be the library," she said, beaming. The President's wife then described one of her favourite childhood memories - time spent reading with her mother in the public library.

No matter what you think of her husband's policies, you could not doubt her genuine affection for libraries.

Books, said Laura Bush, have a unique way of uniting peoples of the world. She suggested that InfoCenterUSA in Bratislava would give generations of Slovaks and Americans a bridge to each other.

"I am confident that InfoCenterUSA will encourage the warm friendship that exists between Slovaks and Americans."

Representing the Slovak side of the equation was Slovak Culture Minister Rudolf Chmel.

"I am very pleased to welcome here, on behalf of all the Slovak community, Mrs Laura Bush."

Chmel lauded the "refurbished premises" several times in his address; and he referred to the University Library as the city's "spiritual centre". Finally, Chmel told the assembled crowd that InfoCenterUSA would extend the library's collection and benefit the entire community.

"Visitors to the refurbished library will have the opportunity to familiarize themselves not only with the works of Slovaks and other international authors but also with the works of Hemingway, Faulkner, Fitzgerald and many other prominent American writers," he said.

When the University Library opens in April, it will contain an Austrian centre and a Russian centre in addition to InfoCenterUSA.

The plan is for more such international centres to open within the library, making it a "window on the world" so to speak.

InfoCenterUSA in Bratislava is the result of cooperation between the University Library and the US Embassy. The library is providing space as well as a dedicated librarian fluent in both English and Slovak to assist visitors in using the centre's resources.

The US Embassy is responsible for the centre's core collection of materials, valued at $15,000; it invested $9,000 in multimedia equipment as well.

According to US Embassy Public Affairs Officer Barbara Zigli, who helped organize the ceremonial opening, visitors to InfoCenterUSA will find the latest books, CD-ROMs and DVDs on a wide range of topics, including US history, political science, economy, philosophy, literature and art.

Zigli says the mission of the centre is to promote mutual understanding between Slovaks and Americans by providing information about the US and serving as a focal point for American cultural and information programmes.

Access to InfoCenterUSA will be free of charge to library patrons and open to all in accordance with the University Library's organizational rules.

This will be the second such InfoUSA center in Slovakia; the first was opened in March 2004, in the State Scientific Library in Košice.

According to Zigli, Košice was selected for the first InfoCenterUSA because of its position as Slovakia's second largest city. "It is a gateway city for Eastern Slovakia, a region with deep and longstanding ties to the US... which is reflected today in the presence of US Steel."