A DECADE ago, on March 1, 1995, the first issue of The Slovak Spectator was quietly printed and distributed with little publicity or fanfare - although not without incident. 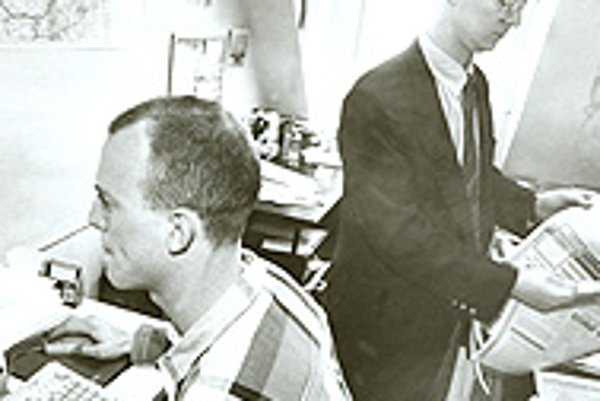 A DECADE ago, on March 1, 1995, the first issue of The Slovak Spectator was quietly printed and distributed with little publicity or fanfare - although not without incident.

"The first time I saw a printed version of our newspaper was in a dumpster outside the printing house next to the Danube River on a cold, rainy day," remembered Eric Koomen, one of the four original US founders of The Slovak Spectator.

"I had heard rumours of Slovak special interest groups throwing issues of The Prague Post into the river because the paper wasn't Slovak. Naturally I had thought that the same fate had sabotaged our dream as well. Luckily, these newspapers were only the defective copies from the printing presses' first run."

Ten years later, the newspaper's publisher, The Rock, also puts out the Spex monthly magazine, the Spectacular Slovakia annual travel guide, and three other annual special publications. Following the demise in 2004 of the Prague Business Journal, The Slovak Spectator remains one of the longest-surviving English-language newspapers in the region.

Few might have predicted a long life for the paper given its shaky start. Daniel Borský, who was hired as a journalist in January 1995, remembered being unimpressed by his prospective employers.

"The 'preparatory committee' of this new venture was in an apartment owned by one of the would-be founders. There I was told that a licence for the business was being procured from the ministry, that their computer equipment was being shipped, and that their contract with a printing house was being negotiated.

"When I asked about the address of the new office, they asked me, a guy who had come for a job interview: "Would you happen to know about some office space?"

The space that was eventually secured, on Križková Street near the train station, was rough to begin with, and as an interior reconstruction project advanced, it became steadily less bearable.

"Shortly after I arrived in Bratislava in 1996, I learned that The Slovak Spectator needed proofreaders," says Ann Johnson, who volunteered as a proofreader for three years. "Editor Richard Lewis had advertised in the International Women's Club newsletter for native speakers. So over the three years of my Slovak sojourn, I organized a group of American and British women - Cathy Dillon, Tessa Harborne, Jenny Kendall, Elspeth Simpson and myself.

"We came faithfully to the office before each issue was printed to go over the entire paper. I recall the first office on Križková as being rather grubby and uncomfortable. The last day I worked there before it was renovated, there was no heat, and demolition grit was everywhere."

The primitive conditions combined with a shortage of funds challenged the faith of the founders in their creation. "Foreign investment never came," said Dan Stoll, who with Koomen stills owns a stake in the paper he helped start. "The Spectator looked like it was doomed after six months. There were many sleepless nights wondering if tomorrow would be the end."

"We knew nothing - nothing! - about business," admitted Rick Zednik, whose journalism degree also represented the total formal media training the foursome had. "We were four equal shareholders, with zero years of combined business experience, starting an independent newspaper in a country with no tradition of private enterprise or free press."

But a strong year of revenues in 1997, combined with a realization the paper had to develop to survive in the long term, led the owners to turn from a bi-weekly to a weekly format in September 1998. As a weekly in a more business-friendly Slovakia under the Mikuláš Dzurinda government, the Spectator attracted more interest from potential investors, and was bought out in April 2000 by Petit Press, a Slovak-German publishing chain. The new majority owners brought financial stability, and the firm's basic capital now sits at Sk3 million (€80,000) , up from an original Sk100,000 (€2,600) in 1995.

However, The Slovak Spectator has been more than just a successful business venture. In avoiding open criticism of the Vladimír Mečiar government for its first two years, the paper won a reputation for objectivity that was unusual in Slovakia's passionately polarized media market. When it eventually did introduce a cautious editorial comment following the Mečiar government's thwarting of the May 1997 referendum on direct election of the president, it added momentum to a pro-democracy movement that resulted in the election of the west-leaning Dzurinda government in 1998 elections.

"The Slovak Spectator entered the Slovak media scene at a time when every voice was needed to draw public attention to the consequences of the former government led by Vladimír Mečiar," said Katarína Závacká of the State and Law Department of the Slovak Academy of Sciences.

While Slovakia's democracy is considerably more mature than it was a decade ago, media professionals agree that the country continues to need serious journalism.

"The media acts as a check and a control on power," said Pravda daily editor-in-chief Petr Šabata. "In Slovakia you can really see how the government tends to expand into places it has no business. Now that the government is in its second term, you can see how power is becoming rotten, how people are wheeling and dealing for themselves. In this situation the media has an irreplaceable role to expose this behaviour.".

With the Spectator celebrating its 10th anniversary this month, its original founders declared themselves lucky to have been a part of its success.

"I met people I ordinarily would have - perhaps should have - had no business meeting," wrote Richard Lewis. "One of them was named [President] Michal Kováč. I remember at our meeting at the Primaciálny palác [Primate's palace], he asked: "Ako sa vám páčia slovenské dievčatá?" [how do you like Slovak girls?]."

"As I look back now, a decade later, would I have done things differently? Absolutely," confessed Zednik. "And what a shame that would have been. If I knew then what I know now, I would have recognized the obstacles to success, the high risks of failure and I would not have invested in the business. I would have missed out on the fun and fulfillment of a lifetime in favour of a safer path."

For those who remain at the helm of the Spectator, including Stoll, Koomen and Petit Press director Alexej Fulmek, however, the anniversary was equally about plans for the future.

"We are proud to be majority owners of The Rock, and we look forward to continued cooperation with the people who founded the Spectator a decade ago," declared Fulmek.