EVERY year on March 1, Bulgarians present relatives, colleagues and friends with martenitsa - a double red and white tassel. This ancient tradition is as old as Bulgaria itself, dating from 681 AD. 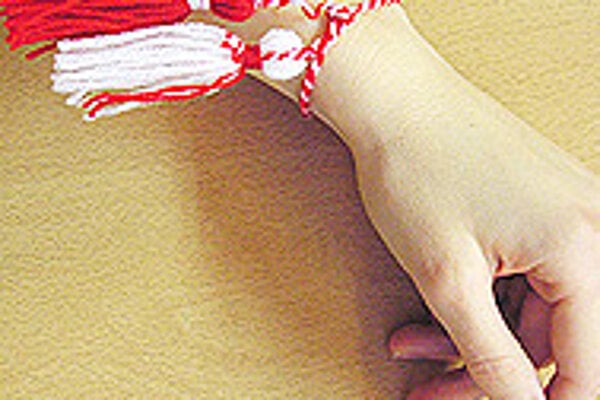 Font size:A-|A+0
EVERY year on March 1, Bulgarians present relatives, colleagues and friends with martenitsa - a double red and white tassel. This ancient tradition is as old as Bulgaria itself, dating from 681 AD.

Bulgarians put the martenitsas on their clothes or wrists and wish each other health and happiness by saying "Chestita baba Marta" or "Happy Grandma Marta." The name, Marta, comes from the Bulgarian word for March. According to tradition, Marta is an angry old lady whose mood changes quickly from bad to good and back again.

The early Bulgarians fought often, and it seemed wars started at the beginning of March. The men went off to battle, leaving their families at home. The women were understandably unhappy about this and worried about their husbands' safety. They gave their men small red and white tokens, either red and white cloth strips or small woollen figures - a white girl and a red boy (Pijo and Penda). Red represented the warriors' blood while the white was the colour of their wives' pale faces, waiting for their husbands to return home.

The tokens were meant to remind the men of their families as well as please Baba Marta so she would not change her mood so frequently, which often meant dangerously cold weather for the men.

The tradition continues today, although now Bulgarians give martenitsas only in the hope that Baba Marta will not make us cold. If a Bulgarian friend gives you a martenitsa, you must wear it until you see the first stork returning from winter migration. Then you throw the martenitsa onto a tree. In Bulgaria, everyone wears a martenitsa, especially babies, young children, newlyweds and newborn domestic animals. Some fruit trees, door handles and vineyard are adorned with martenitsas, too.