Harold and Kumar Go to White Castle
Starring:John Cho, Kal Penn, Paula Garces, Neil Patrick Harris, David Krumholtz
Directed by: Danny Leiner
Running time: 88 min
Rating: 5 out of 10
AS PEOPLE grow older, they often become fond of saying things like "They just don't make them like they used to" and "Things were so much better in my day". 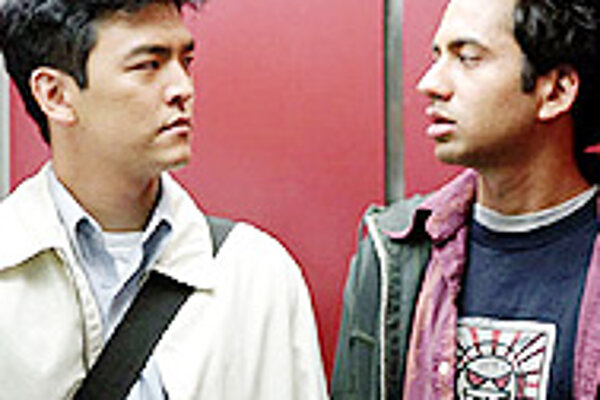 Font size:A-|A+0
AS PEOPLE grow older, they often become fond of saying things like "They just don't make them like they used to" and "Things were so much better in my day". Almost without fail, such nostalgic proclamations are rooted in the assumption that, as time goes by, younger generations screw things up: They do it more cheaply, they lose track of the meaning of something, or they forget what's important.

One of these proclamations contradicts this assumption of modern inferiority (depending on your viewpoint) and simultaneously makes sense of young people's forgetfulness: As many rapidly aging children of the 60s and 70s have told their children over the past two decades, "Marijuana is much stronger today than it was in my day".

Chemical data analyses aside, it is true that since pot smoking came into widespread prominence in the 60s, many people have spent a great deal of time perfecting its cultivation. Nearly 40 years later, it's only natural that the drug would be far stronger and far more dangerous. The same cannot be said, however, for movies about marijuana.

The latest in the stoner movie tradition, Harold and Kumar Go to White Castle, may feature marijuana far more potent than its predecessors, but its jokes are unfortunately far more tame. This is no great surprise, given that the film's director, Danny Leiner, is best known for Dude, Where's My Car, the 2000 movie starring Ashton Kutcher and Seann William Scott that has won the hearts of stoners everywhere, despite being an exceedingly dull one-trick pony.

Fortunately, John Cho (Harold) and Kal Penn (Kumar) prove far more likable than the tedious, annoying, and untalented Kutcher and Scott. But they still possess only a fraction of the charisma of Cheech and Chong, the stars and creators of Up in Smoke, the 1978 stoner classic about two accident-prone friends who drive around and smoke a whole lot of marijuana.

This could also describe the plots of Harold and Kumar and Dude, Where's My Car, although the latter is actually about two guys looking for their car. The point is that these movies are not known for their inventive plots. Rather, they're all about the crazy, hazy journey and the bizarre characters that our

THC-addled heroes meet along the way.

Harold and Kumar certainly has a handful of funny moments. The most clever are riffs on ethnic stereotypes: Harold's Korean ancestry, Kumar's Indian ancestry, and a scene with a peaceful black man who is thrown in jail for no particular reason. There are a few other scenes involving - in no particular order - a raccoon, a cheetah, and a pulsating boil that are simply too ridiculous to not at least chuckle at. But like so many other teen comedies in this post-There's Something About Mary world, the movie feels like it's striving too hard to up the gross-out ante.

Try as it might to be over-the-top and absurd, it lacks the anarchic rebelliousness that characterized Cheech and Chong's first movie and other excessive comedies of that era (Animal House, The Kentucky Fried Movie, and, to some degree, Caddyshack). Perhaps part of the problem lies in the difficulty of rebelling against a generation that basically invented drug-related rebellion.

Not that Harold and Kumar seem particularly interested in rebellion. They're just two nice, nerdy, rather boring guys whose idea of a good time is smoking a lot of pot and then searching for a particular restaurant that specializes in miniature hamburgers (White Castle). There's nothing inherently wrong with this, but it's hard not to think that their parents would have done it so much better.