SLOVAKIA's Economy Ministry continues to chase the 49-percent share of the oil pipeline operator Transpetrol, currently owned by now bankrupt Russian oil producer Yukos.
Buying back the minority stake seems to be a backbreaking task, as the Economy Ministry does not know exactly who owns them, a consequence of Yukos' disintegration 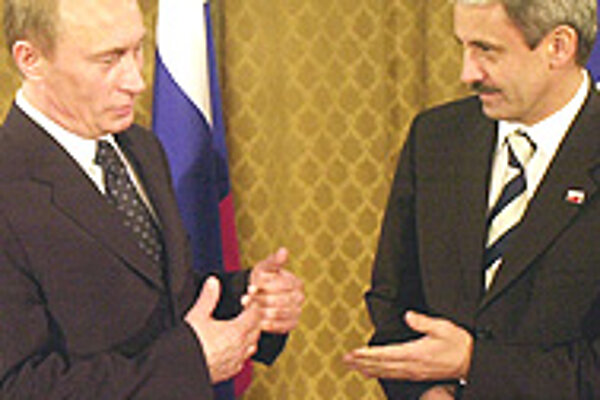 Buying back the minority stake seems to be a backbreaking task, as the Economy Ministry does not know exactly who owns them, a consequence of Yukos' disintegration. A Yukos-affiliated daughter company registered in The Netherlands currently controls the shares in question, but it is unclear who is behind this company.

Yukos took control of the 49-percent stake in Transpetrol in 2002, after the Slovak government granted the Russian oil giant the public tender. Slovakia still controls 51 percent of Transpetrol, the former state-owned pipeline company.

Officials are careful when they comment on the likelihood of Slovakia buying back the 49-percent stake.

"It is very difficult to say what Slovakia's chances are. We have taken some concrete steps but it remains a very sensitive issue. The ownership situation within Yukos is still unclear. I can only say that the Slovak side is doing its best to gain back the shares," Economy Ministry spokesperson Maroš Havran told The Slovak Spectator.

Russian President Vladimir Putin threw a cog in the wheel February 25 when he revealed that Tatneft, an oil refinery based in the Republic of Tatarstan, was showing interest in snapping up the 49-percent stake. He also indicated that another Russian company was interested in Yukos' Transpetrol shares as well.

A state-controlled company, Tatneft is the sixth biggest oil producer in the Russian Federation.

In terms of oil reserves, the company is ranked 18th in the world, extracting 25 million tonnes of crude oil annually. Its production covers about 8 percent of the total oil production in the Russian Federation.

The firm exports most of its oil to Ukraine; its products are traded on commodity markets in London and New York. In 2003, Tatneft posted a profit of Sk122 billion (€3.2 billion).

According to news wire SITA, the oil company also wanted to buy Czech Unipetrol; however, the Czech government eliminated Tatneft from the public tender.

The revelations by Russian President Putin over Tatneft's interest in Transpetrol shares surprised the Slovak government. On February 23, Russian officials told Slovakia that Putin would not discuss the issue during the course of the US-Russian summit.

Putin himself opened the debate. When interviewed by the public television station Slovak Television (STV) just prior to his trip to Bratislava for the summit, the Russian president said he knew nothing about Slovakia wanting to buy back the shares from Yukos.

"I am hearing about it for the first time. It is a matter for Yukos itself," Putin told STV February 22.

Putin said he did not know whether or not the bankrupt oil giant was preparing to sell its Transpetrol shares.

"But one thing is clear to me," Putin said in the STV interview. "Slovakia's legitimate interests should be taken into account in all circumstances."

Earlier this year, Slovak Economy Minister Rusko said he had informed the Kremlin about Slovakia's intentions to buy back Yukos' 49-percent stake in Transpetrol.

Meanwhile, in reaction to Putin's announcement about Tatneft, oil giant Yukos declared that it had no intention of selling its Transpetrol shares.

Late February, a top Yukos official told the Slovak news wire TASR that the Transpetrol shares were not up for sale. The official added that Yukos is not leading talks on the sale of the shares with anyone, be they Russian or foreign investors.

Slovakia announced its intentions to reacquire Yukos' shares in Transpetrol in November 2004, just two and half years after the Slovak government sold the minority share to Yukos.

"We are interested in either the Slovak side buying back the shares and subsequently selling them to another investor. Or the Slovak side could become a mediator and secure the transaction of the shares to a different company, one which has a high credit rating, experience and comes from a stable environment," Maroš Havran told The Slovak Spectator.

He confirmed that if Slovakia managed to get the shares back from Yukos, the Economy Ministry would be interested in selling them to a qualified investor.

"Any buyer must guarantee stability and that Transpetrol will function at least as well as it does now," the ministry spokesperson told The Slovak Spectator.

Havran would not indicate how the state is trying to influence the situation. He only confirmed that letters and phone calls is as far as it has gone.

The Economy Ministry has not held any direct meetings with Yukos. However, Havran thinks that Yukos would have to approve any transfer of shares, even if a Yukos subsidiary in The Netherlands currently controls them.

"Corporations are set up so that a daughter company cannot make strategic decisions without the approval of the parent company," he told the Spectator.

Lithuania, like Slovakia, also sold a percentage of its state-owned oil refinery to Yukos. However, unlike Slovakia, Lithuania has managed buy back its 10 percent.

According to economic daily Hospodárske noviny, Yukos gained 53.7 percent of Lithuania's state-controlled refinery during privatization. Mazeikiu Nafta is the only crude oil refinery in the Baltic States. Yukos agreed to give up its majority in the company, however, by selling a 10-percent stake back to the Lithuanian government.

In 2004, the Russian judiciary fined the company €2.64 billion in back taxes. Shortly afterwards, the Russian government slapped another tax suit on Yukos, bringing its liability to €5.2 billion.

The Transpetrol management has tried to stay out of the debate.

"The repurchasing of the 49-percent share of Yukos in Transpetrol by the Slovak government is a matter of agreement between the two shareholders. The leadership of Transpetrol does not consider comments over the issue appropriate," Transpetrol General Director Štefan Czucz told The Slovak Spectator.

The Slovak government sold its Transpetrol shares to Yukos for $74 million. Experts assume that the value of the Transpetrol shares is more-or-less the same. There has been no public discussion about where the state would find the money to buy back the shares.

Yukos had hoped to use the stake to gain access to western and southern European markets, as well as initiate a pipeline sea route to North America.

The Slovak pipeline network enjoys an advantageous position on the European crude petroleum market, giving Transpetrol leveraging power. The network consists of two routes - the Druzhba and Adria pipelines - both of which have favourable geographic locations and a relatively high transport capacity.

Druzhba was built on Slovak territory between 1960 and 1961. Its route starts in the Russian Federation and continues to the Czech Republic through Belarus, Ukraine and Slovakia.

The Adria pipeline covers just 8.5 kilometres in Slovak territory, starting in the Croatian port of Omishajl and leading to Hungary and Slovakia. It has an overall length of 606 kilometres and an annual capacity of 4.5 million tonnes.

Magdalena MacLeod contributed to the article