THE DEMOCRACY conference at the Slovak Foreign Affairs Ministry February 23 sizzled with emotions unusual at such diplomatic meets. Member of Parliament Giorgi Bokeria from Georgia, for example, drawn into debate about the direction of Russia's democracy, charged in a booming voice, "[Russian President Vladmir] Putin's either with us or against us!" 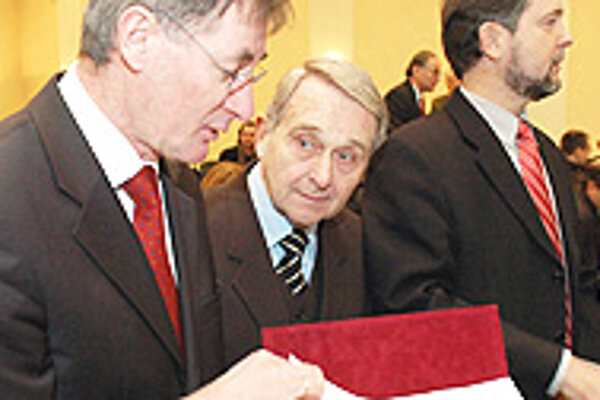 Font size:A-|A+0
THE DEMOCRACY conference at the Slovak Foreign Affairs Ministry February 23 sizzled with emotions unusual at such diplomatic meets. Member of Parliament Giorgi Bokeria from Georgia, for example, drawn into debate about the direction of Russia's democracy, charged in a booming voice, "[Russian President Vladmir] Putin's either with us or against us!"

Expressions of partnership and solidarity between panelists and audience members were more frequent. Alexandr Vondra, a seasoned ex-diplomat known for his cynicism and respected for his criticism against distant bureaucracies (including the European Union), reportedly shed a tear.

The conference, which drew about 300 people over the course of the all-day event, gave those passionate about democratic principles a chance to discuss the problems of democratic transformations in the countries of the former Soviet Union.

Slovakia, held up as a model of peaceful democratic and economic success, was examined for what it could offer countries in Eastern Europe and the Balkans where a democratic shortfall threatens to destabilize the region.

Activists and civil society groups from Serbia and Montenegro shared their hard-won experience from the front lines of the former Yugoslavian states.

Ukraine and Georgia served as a beacon of hope for groups from Belarus and Moldova.

Sonja Licht, a longtime member of the Yugoslav democratic opposition and one of the featured panelists, said the best thing to come out of the conference was the public acknowledgement that the strong democracies of Europe and the United States are collectively responsible for the future of democracy in post-Communist countries.

"The most important message of this conference, as I understand it, is a new effort to understand how Europe and the US can work together to support democracy in Central and Eastern Europe," Licht told The Slovak Spectator.

"The most important one is the significance of an increasing role in the region by NGOs, international organizations, the US and Western European democracies. A second message regards the precious effects of bolstering persuasive transatlantic (US-Europe) relationships. Third, a revival of the 'consciousness' of people to interact with one another, to reinforce the society's well being, to pay attention to politics and to be involved directly in the management of public affairs," Sergi told The Slovak Spectator.

Like several other audience members, Sergi was disappointed by the absence of a Russian point of view.

According to news agency Charter '97 Press Center, Russian television station NTV reported that Russia was represented at the New Quest for Democracy conference by one person - a member of the human rights organization, Memorial Grigory Shevdov. Charter '97 Press Center stated, "As the NTV channel informs, well-known political analysts Gleb Pavlovsky and Vyacheslav Nikonov wanted to come to the conference, but they were not allowed to come."

The German Marshall Fund allegedly told Charter '97 Press Center, "It is a conference about democracy, and [Pavlovksy and Nikonov] are not the best representatives of Russian democracy.

It would have been interesting to hear Georgian MP Bokeria and his Russian equivalent volley ideas back and forth, for example.

Sergi told The Slovak Spectator: "Surely, representatives from Russia would have added several key sides to talk about. For example, the complexities of the Russian society, what Russians really want, what they truly require. The impact of Russia's economic collapse, the poverty there, was not mentioned at all. A broader debate could have touched wealth disparity from an ethical perspective, and appropriate policymaking."

Balkans civil society leader Licht was put off by the hard line that panelists like Bokeria took against Russia. She said the tone of the MP reminded her of the "good-guy / bad-guy" delineations between the West (US and Europe) and Russia that dominated the Cold War period. Licht felt this "development" was very bad, since the media "is drawn to simplification".

Kubiš, the secretary general of the OSCE (Organization for Security and Cooperation in Europe), told the conference: "Partnership is a key factor. Working with Russia is important." He stressed building a tripartite relationship throughout his talk.

Russia was not the only country to endure criticism, however.

Jacques Rupnik is the director of studies at the Centre for International Research at the Fondation Nationale des Sciences Politique in France. As one of the few Western European panelists, the Sorbonne graduate and BBC World Service alum called on the European Union to develop a strong democratic strategy.

"A condition of the credible promotion of democracy has to start at home", he said.

Rupnik added that The Patriot Act in the United States, for example, which limits specific civil liberties in the effort to fight terrorism, made it easier for Putin to deflect criticism from President Bush for Russia's brand of democracy.

Rupnik did concede a "noticeable change in the attitude of the United States toward the EU." He described a warm and friendly demeanor presented by US Secretary of State Condoleezza Rice during her European visits - a contrast to her attitude towards Europe when an invasion of Iraq was being debated.

According to Rupnik, the US understands it needs allies in Europe. He said the Bush administration's emphasis on democracy and liberty in its second term bodes particularly well for transatlantic cooperation on democracy in Central and Eastern Europe.

However, "What goes down better in the EU goes down worse in Russia," he said.

Rupnik also cautioned his colleagues not to get too comfortable regarding Slovakia's success, pointing out that democracy in reformist countries is weakened by the fact that tangible benefits can be delayed for years.

European Commissioner Figeľ also spoke to this point. EU enlargement and cooperation between the US and the EU to promote democracy in "third states" (i.e., Ukraine, Belarus and Moldova) would necessarily help the reformist government defend democracy in Slovakia, according to Figeľ.

One of the most celebrated activists in Central and Eastern Europe, Pavol Demeš described Slovakia's "thorny road to democracy". Demeš, who helped organize the opposition to Mečiar and then went on to advise the opposition in Serbia and Ukraine, took a systematic, 15-year outlook on the country, starting with the Velvet Revolution in 1989 and ending with Slovakia's present preoccupation with image building.

"This last period (May 1, 2004 to the present) is characterized by adjustment, a search for added value. Slovakia is busy changing its image from 'black hole' to 'Tatra Tiger'. There are many things to accomplish before we can be considered a regular democratic country," Demes said.

From the perspective of Irina Krasovskaya, the leader of two important democratic civil initiatives in Belarus, We Remember and Free Belarus, Slovakia's state of democracy is a worthy goal.

Addressing the international conference, she described the political changes in Belarus and urged the international community to exert pressure on Lukashenka's regime. In closing, she said: "We are not different from Georgians or Ukrainians. Just like them we have what it takes to win - the desire to be free. I am often asked "When will Belarus gain its freedom?" Speaking in Bratislava, a city closely associated with the spirit of freedom and democracy, I can give you a confident answer, 'Real soon.'"

A question directed at conference panelists by an audience member at the end of the conference did not get answered. It likely will continue to gnaw at NGOs and other organizations trying to secure democracy in Russia's near abroad: How can international organizations make a difference in countries like Belarus, for example, or in other regions struggling to become democracies, where the efforts of NGOs are blocked?

Perhaps the community activists in Ukraine, or Georgia, can offer some advice. Or maybe the answer was embodied in the conference itself?

A New Quest for Democracy: Shaping an Agenda for the Euro-Atlantic Community was organized by the Institute for Public Affairs and the Slovak Foreign Policy Association, in cooperation with the German Marshall Fund of the United States. Panelists and audience members included representatives of non-profit organizations and grassroots movements from Central and Eastern Europe and leading policy experts from the US and Europe.