AT THE Gold Lot bus stop at Dulles airport, a woman spotted my skis and asked me where I was heading. "Slovakia," I responded. She looked dumbfounded. "If you are a skier, you go where the snow is!" I told her. 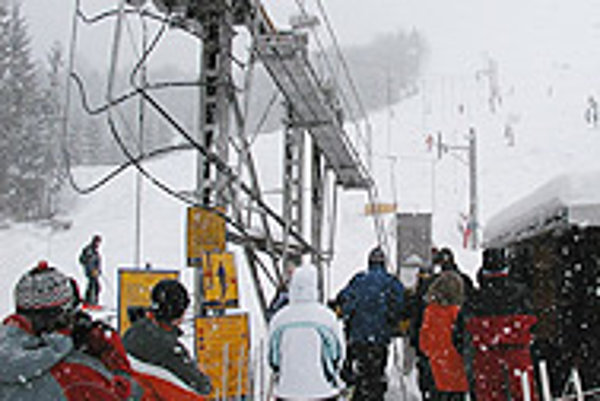 Font size:A-|A+0
AT THE Gold Lot bus stop at Dulles airport, a woman spotted my skis and asked me where I was heading. "Slovakia," I responded. She looked dumbfounded. "If you are a skier, you go where the snow is!" I told her.

Snowfall in Slovakia just broke a 50-year record in February, attracting the attention of skiers from all over the globe. With no regrets, I departed the bare earth of the Mid-Atlantic, and headed to a land where between 100 and 300 centimetres of snow covered most major mountains.

At Vienna airport, I nearly fell on the slick parking lot of the rental car area. Freezing rain had turned the roads into a mess, but ice gradually became snow shortly after Bratislava - a 40-minute drive from the airport. To be in a car headed to the mountains in a snowstorm is every skier's dream but also nightmare.

The Volkswagen Golf I rented had snow chains but not snow tyres, which forced me to pull over and put the chains on every time the road turned white. Fortunately, the snow was not heavy enough on my first day in Europe to compel me to struggle for 15 minutes to get these metal necklaces on my front tyres, but I would employ them on many other occasions during the course of my 12-day visit to Slovakia and Austria.

Arriving at the farm of my wife's parents on Poľana mountain in Central Slovakia was like a scene out of Doctor Zhivago. Heavy snow on the steep access road forced me to offload my luggage onto a small sled and slide it 100 metres down a slope to the farm's new guesthouse.

Spruce panelling covered all the walls and ceilings of the two-room cottage, giving the place a distinctly alpine smell. Two new comforters recently stitched by my mother-in-law lay folded on the bed, and a wood stove pumped warmth into the kitchen. My mother-in-law soon came in with a plate of potato pancakes, fresh bread made by Capuchin monks at the monastery up the hill, fruit tea, and batter fried fish. Magpies swooped through the trees and a solitary European woodpecker pecked on a nearby tree.

Over the next few days, I would often wander around the farm with a giant pair of Russian Army binoculars gazing at various birds, including a Eurasian Jay and a small flock of pheasants.

All the fresh snow on the ground, however, made me eager to take flight to a local ski centre. My father-in-law suggested that I earn my turns by hiking and skiing the steep terrain around his farm. As a young man, Pope John Paul II (Karol Jozef Wojtyla) enjoyed earning his turns on the Polish side of the Tatras Mountains not far from where I stood. Being less virtuous than the former archbishop of Krakow and tired from travel, I opted instead for an easier solution: a local slope called Biele Vody (White Water).

Continued snowy weather and the resort's 1,100-metre altitude made chains a must. Biele Vody has a modest vertical of 200 metres and only two Poma lifts, but its steep terrain made for a dynamic afternoon of skiing. Furthermore, a half-day lift pass only cost Sk170 (€4.20). With over 100 centimetres of snow, I was in heaven. As Warren Miller would say, "The best ski resort in the world is the one you are at and the lifts are running."

Well, sort of. Unfortunately, my "stairway to heaven" was not a chairlift but an old Slovak manufactured plate Poma that dragged skiers at a high rate of speed up a hill with grades of over 53 percent in spots. Before I could even attempt to ride this monster, someone fell and another skier pulled the cable off a spinning wheel as he tried to avoid the downed skier. I looked at my wife and sighed, "this is just like Timberline, West Virginia".

But like Timberline, Biele Vody had an amazing capability to recover quickly from maintenance woes. In just 10 minutes, the mountain operations people had the lift repaired. One of the advantages of Pomas over other forms of uphill transportation is their relatively easy maintenance and low operational costs. The disadvantage of these beasts is that on steep terrain, one must concentrate hard to remain on track. If the Poma stops, you slide backward until the lift's arresting wire stops you.

At the end of the day, the Slovak lifty told my wife that I had earned the "skier of the day award" for my sloppy Poma style. In stark contrast to my awkwardness were the local skiers I encountered. They not only road the Poma with ease, but skied this steep hill with elegance. I felt embarrassed on my new Volkl 6 Stars as 60-year-old skiers tore up the bumps on their long, straight skis. To ski is the life in Slovakia. Nearly everyone masters the sport at an early age, and over 101 ski resorts dot the landscape.

After about five runs, I needed to refuel so we headed to a mountain restaurant for some Slovak cuisine. The restaurant, a converted one-room schoolhouse, sold me a bowl of bean soup, a Diet Coke, and a plate of halušky (dumplings in a cheese sauce) for just Sk120 (€3).

One of the big advantages of skiing in Slovakia is its low cost relative to the Alps. At many mid-sized resorts, one can ski, sleep, and eat for less that €40 per person per day. Furthermore, most mid-sized resorts now have snowmaking and grooming machines. Even Biele Vody, a miniscule place by Slovak standards, grooms its terrain on most weekend days and has snowmaking.

In addition to small and mid-sized resorts, Slovakia offers large destination-style resorts with world-class hotels. To get a taste of Slovakia's upper end, I travelled to Jasná for two days with a Slovak photojournalist, Roman Millan, and stayed at a four star hotel called Tri Studničky. A one-night stay there with breakfast and dinner cost less than €80 per person.

Jasná, the largest resort in Slovakia, offers a vertical drop of 922 metres, and has some of the most modern lifts in the country, including a new high-speed detachable 6-pack with a bubble canopy. The resort is 260 kilometres east of Bratislava in the Low Tatras Mountains, but do not let the word "low" deceive you. Jasná offers more skiable terrain and vertical than any of the Slovak resorts in the High Tatras. Its slopes are also generally steeper and more challenging.

After skiing in the Mid-Atlantic, United States, for the entire season, Jasná seemed huge. In some respects, the mountain, with its weaving tree-lined slopes, reminded me of Stowe, Vermont. The major difference was the above tree line skiing on the top 15 percent of the mountain. High winds and snow made that terrain very difficult to handle, and prevented us from sampling the mountain's famous back bowls. Roman and I once ended up off-trail coming down from the Jasná top station and had to ski our way through a nasty rock field to get back on the piste.

That experience dissuaded me from trying to hike up the steep, 200-metre vertical trail to the Chopok Juh back bowls. These bowls are serviced by Pomas on the south side of the resort, but there is currently no summit lift on the north side of Mount Chopok (2,024 metres). In the next few years, the resort plans to build a lift to finally link those southern bowls to the northern slopes of Jasná, but high winds will present challenges.

On a chairlift, we chatted with a Slovak skier from the nearby town of Liptovský Mikuláš. The skier, who worked as a lifty at Vail last year, could not believe that I had come all the way from America to ski Jasná. "I go where the snow is," I told him. The skier told us that in three years, we would not recognize the place. Jasná has big plans to add more high-capacity lifts, and increase snowmaking capacity.

In the meantime, skiers must occasionally ride Pomas and put up with lines that can be longer than 20 minutes on weekends. Those looking to escape the crowds might consider skiing smaller venues like Biele Vody. A list of most of Slovakia's ski resorts can be found on www.holidayinfo.sk">www.holidayinfo.sk.

John Sherwood is a columnist for DCSki.com and an occasional contributor to The Slovak Spectator.