THE CONTENTS of the collection of textiles in Bojnice Museum are more important than its size. The most valuable are the fragments of three medieval gobelins that are among the oldest pieces of textile in Central Europe. 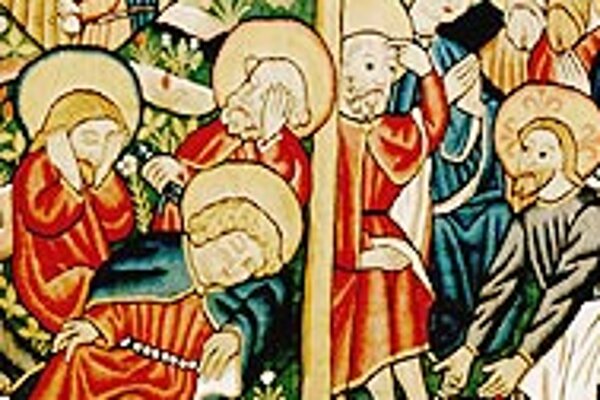 Font size:A-|A+0
THE CONTENTS of the collection of textiles in Bojnice Museum are more important than its size. The most valuable are the fragments of three medieval gobelins that are among the oldest pieces of textile in Central Europe.

They were made by medieval monks and belonged to Count Ján František Pálffy, the last owner of Bojnice castle.

The gobelins were hand woven using the weft rep technique, with a linen warp and a woollen weft.

The largest tapestry fragment, measuring 85 by 186 centimetres, shows the Passion scenes - Christ in the Garden of Gethsemane, The Washing of the Feet and The Last Supper. The gobelin was sewn in the workshop of St Catherine's Monastery in Nuremberg around 1450, as was the replica of The Last Supper owned by the Bavarian Museum in Munich.

The main scene shows Christ in the Garden of Gethsemane at the Mount of Olives on his knees praying to the grail with a cross. Behind him the apostles Peter, James and John are sleeping. In the background we can see Judas with a pouch in his hand entering the garden, accompanied by the chief priest's servant Malchus and the Roman soldiers.

Palings with small wild flowers on their surface enclose the garden. One of the background scenes shows Christ washing Peter's feet, the other is the Last Supper. Christ is sitting at the table with his disciples. On the table tin plates, cups, a wine flagon, a knife and bread are laid.

Christ's favourite, John, is resting on his chest. In the foreground, three apostles are sitting on a stone bench. On the left is Judas with a pouch hanging over his shoulder.

The second gobelin fragment is a narrow one - only 17 cm wide and 193 cm long - showing the The Virgin Mary Among Female Saints. This tapestry was made in Nuremberg in the first half of the 15th century. The precise identity of the workshop that made it is unknown. In addition to the linen warp and woollen weft this tapestry uses bleached linen and Leonian thread. The colours are deep red, blue, ochre and green.

The tapestry shows eight female saints around the Madonna with Christ the Child. The female saints, each with her symbol in her hands, are portrayed from three-quarter view turning their faces to Madonna. Ranging from left to right they are: Mary Magdalene with a box for ointment, Christina with a millstone, Agnes with a lamb, Catharine with a sword and a wheel, the Virgin Mary with Christ the Child, Barbara with a cup and a host, Margaret with a dragoon, Ursula with an arrow and Clare with a ciborium.

The third tapestry features animals and measures 55 by 123 centimetres. It is the oldest of the gobelins, probably made by a monastic German workshop in the late 14th century. It consists of two squares, each showing scenes of wild animals in their natural surroundings.

The tapestry's main feature is a deer with two dogs and two squirrels around it. The animals are shown in profile in a stylized way.

Flowers and trees representing nature are highly stylized, too. The gobelin was originally woven as part of a longer band of a wall-hanging consisting of individual squares all showing scenes from nature.