Churches come to the castle

THE WOODEN church architecture of the Carpathian basin is one of the most valuable pieces of Central European culture heritage.
Many traditional churches, temples and belfries in the Czech Republic, Hungary, Poland and Slovakia were pulled down and replaced by modern ecclesiastical structures, but many have been preserved. 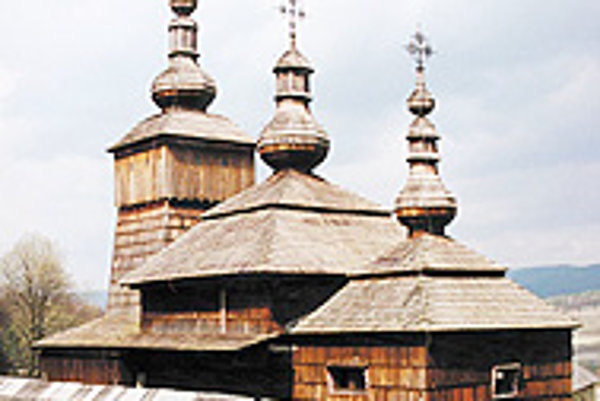 THE WOODEN church architecture of the Carpathian basin is one of the most valuable pieces of Central European culture heritage.

Many traditional churches, temples and belfries in the Czech Republic, Hungary, Poland and Slovakia were pulled down and replaced by modern ecclesiastical structures, but many have been preserved.

Out of those still standing, 95 are now shown in colourful photographs and four scale models at Žilina's Budatín castle. The castle is the 14th venue to host the Wooden Ecclesiastical Architecture in Central Europe display, prepared by the Visegrad countries.

"The exhibition was first shown in April 2002, at the Orava Gallery, and then toured Europe. After the Žilina stop, it heads to Germany," said Jaroslava Mrvová from the Považské museum, which runs Budatín castle.

Almost every village in the Carpathian region used to have its own church. They were built of the same material as other buildings in the village.

The wood they used for these sacred buildings was soft and pliable, mainly red spruce though sometimes fir and yew. Oak and beech were used for belfries.

Unsung local carpenters applied all the skills and knowledge acquired from their forefathers to build the churches.

Miloš Dudáš from Žilina's Board of Monuments put together the exhibition in cooperation with Czech, Hungarian and Polish colleagues.

"It does not feature all of the still-standing wooden ecclesiastical architecture in the region. Each country made a selection of the very best," said conservationist Dudáš, who took the majority of the photographs of the Slovak churches.

Over a third of the exhibited buildings - 28 churches and 10 belfries - come from Slovakia. Most of them can be found in the East.

The 16th century Church of St George (Kostol sv. Juraja) in Trnové near Žilina is the most westerly situated wooden church in Slovakia. From there the wooden church phenomenon continues through Orava to the east of the country.

"There are up to 60 wooden church buildings in Slovakia, if I also count the newer buildings," said Dudáš. "In Poland, the number is far larger. If we also include the architecture from the first half of the 20th century they amount to 1,000."

The oldest wooden churches from the 15th and 16th centuries followed the Gothic architecture style. They often stood in an elevated place, in the middle of cemeteries, enclosed by a stone or wooden fence.

The spreading of Protestant ideas during the 17th century led to churches having to be built according to secular rules and limitations. This accounts for their austere appearance.

Wooden churches built in the 17th century were long structures. This changed in the 18th century when construction according to a symmetrical cross design became typical.

The wooden churches of the Greek Catholic and Orthodox Churches are characterized by their tripartite exterior and interior divisions and onion-shaped cupolas and towers. A wooden screen dividing the church nave and sanctuary - an iconostasis - featured painted icons.

Initially Dudáš planned to include wooden Jewish synagogues in the project. But as they are no longer standing he is considering them for a separate exhibition one day.

The Wooden Ecclesiastical Architecture in Central Europe exhibitions runs Tuesday to Sunday from 8:00 to 15:30 until April 30. The Budatín castle is situated at Topoľova 1, Žilina. Tel: 041/5001-511.