US Steel sues for quotas

THE EAST Slovak steel giant is suing the Environment Ministry because it says restrictions on the amount of carbon dioxide it can emit will cost the company billions of crowns and present an "unjust economic burden". 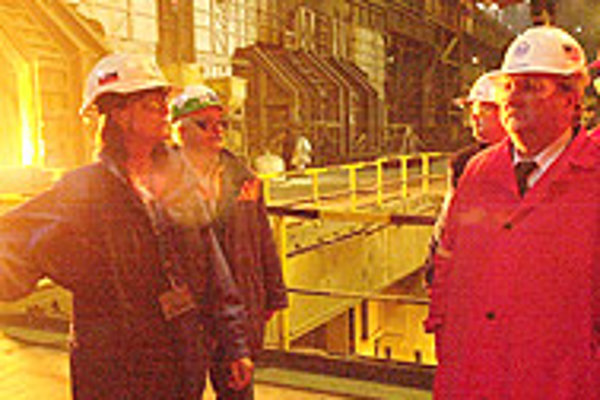 Font size:A-|A+0
THE EAST Slovak steel giant is suing the Environment Ministry because it says restrictions on the amount of carbon dioxide it can emit will cost the company billions of crowns and present an "unjust economic burden".

The amount given to Slovakia by the European Commission is 14 percent lower than what Slovakia requested for 2005-2007.

US Steel's allocation falls 8 percent below what the company wanted.

The reduced emission volume is the result of negotiations between Environment Minister László Miklós and the European Commission.

Based on the Kyoto Protocol, the EU must push down its CO2 emissions by 8 percent. Quotas have been divvied up according to need and distributed to all EU member countries.

"USSK [US Steel Košice] and its parent company, United States Steel Corporation, also formally notified the Slovak Republic that they will seek compensation from the Slovak Republic for all financial damages resulting from this unlawful reduction in CO2 emission allowances for USSK," reads a memo prepared by US Steel.

"It did not happen in a way that we calculated our need for CO2 emission quotas, and they told us that our calculations are wrong or we used an incorrect method. They [the Environment Ministry] in fact agreed with everything, with the calculations and the method used, they only came back from Brussels with different numbers," Bača said.

It is not yet clear how much money the company would have to spend on buying the missing quotas on the market, but the annual costs are estimated at hundreds of millions of crowns.

In early January 2005, Minister Miklós said that certain Slovak companies would have left over emission allowances to sell to other companies. The Environment Ministry refused to comment on US Steel's decision to sue, confirming only that it does not plan to alter its course.

Dana Gregorová from the ministry's press department told The Slovak Spectator that the Environment Ministry "has done everything it could during the negotiations with the European Commission in Brussels and it does not plan to reopen the negotiations".

According to Bača, US Steel did not inflate its quotas and the CO2 estimates were based on the corporation's business plan.

"We have requested only as much quotas as we need for being able to produce the tonnage of steel that we have planned. The business plan itself is already limited by an agreement between the EU and Slovakia [on steel production quotas]," Bača told The Slovak Spectator.

Minister Miklós told The Slovak Spectator January 27 that if Slovakia had refused to accept the compromise, the European Commission would have enforced its own numbers, requiring Slovakia to manage with just 26.5 or 27.1 million tonnes. According to the Environment Minister, the European Commission felt that Slovakia had based its national allocation plan on inflated emissions needs.

Late January, the ministry still said that in the case of big emission producers, the ministry would seek reserves through individual negotiations. On February 28, the Slovak government decided not to challenge the European Commission's ruling that sets an annual ceiling of 30.5 million tonnes on carbon dioxide emissions from Slovakia.The Slovak Association of Employer Unions (AZZZ), an advocate for Slovakia's biggest employers, thinks the Slovak government should reopen negotiations with the European Commission. The AZZZ says that the global impact of the lower CO2 emission quotas will be negative on Slovak businesses, especially those in metallurgy, concrete and energy production.

"It [lower emission quotas] will mean higher production costs, which might damage the fragile profitability of the companies and potentially harm their ability to compete within the European market," AZZZ General Director František Bruckmayer told The Slovak Spectator January 26. Of 21 large companies affected by the National Allocation Plan, five refused to accept the lower emission quotas; all of those who refused are controlled by a foreign investor. However, no other company has followed US Steel in suing the Environment Ministry over the issue.

Carmeuse Slovakia, which produces limestone-related products for industrial customers, is biding its time. "We do not want to file a lawsuit yet. We will calculate what our limitations are within the whole company, which means in 20 countries, and we will decide based on that result," company head Stanislav Voskár told the daily Pravda. In Košice on January 11, representatives of 17 large corporations and the Federation of Employers' Associations have asked the government to take a firmer line in dealing with the European Commission in the matter of limits on the production of greenhouse gases. However, the environment minister's stand is firm: the ultimate goal is to reduce the CO2 emissions based on the Kyoto Protocol. Environmental pressure groups are supportive of the measures leading to the reduction of CO2 emission quotas.

"The EU member states agreed that global annual warming should not exceed 2 Celsius degrees compared to pre-industrial levels. The quotas are only a tool to achieve this goal and force certain companies to lower the use of fossil fuels. US Steel and other big polluters should start energy saving programmes and use renewable energy sources," Barbora Černušáková from the Slovak branch of Friends of the Earth told The Slovak Spectator.

US Steel claims that it has invested more than $180 million in environmental projects, that it is a socially responsible firm and that it has exceeded its obligations in Slovakia.

"Unfortunately, the Slovak government did not fulfil its obligations" writes the firm, which claims it is protecting "its rights and the rights of its employees".

Černušáková says Friends of the Earth wants to know how much US Steel has invested in technology for renewable energy sources.

"It is regrettable that Slovakia is one of the countries currently blocking the EU Council's proposal to further lower emissions by 2020 (by 15 to 30 percent) and 2025 (by 60 to 80 percent) of the levels recorded in 1990.

Greenpeace joins the Environment Ministry in rejecting the claim that the reduction of emission quotas will unbearably burden Slovakia-based firms and harm their competitiveness.

"The industry found the original quotas acceptable mainly because these did not force them to take any action to lower their carbon dioxide emissions," Greenpeace spokesman Juraj Rizman told The Slovak Spectator January 26.

(Magdalena MacLeod
contributed to the story.)