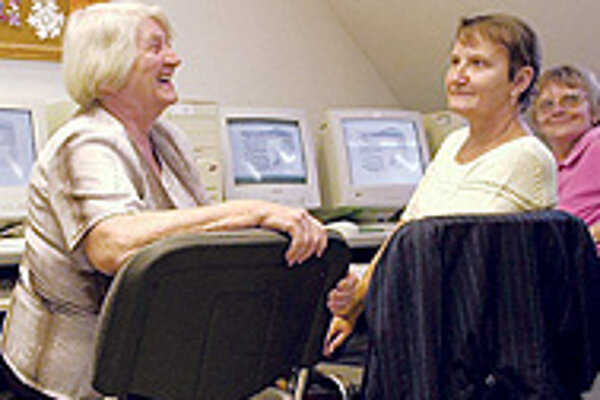 Those are just some of the messages in the media paid for by newly established pension fund management companies. The goal, of course, is to lure future clients into abandoning the current pay-as-you-go system and opening an individual pension account made possible by pension reform.

Judging by the figures released by the state-run social insurance company, which co-manages the new accounts, Slovaks do not need luring. They are signing for individual pension fund contracts in droves.

As of March 8, 2005, Social Insurer (Sociálna poisťovňa) had registered 628,830 individual contracts through pension fund management companies. Original estimates by industry analysts for early March hovered around half that.

Vladimíra Pôbišová, the director of Social Insurer's public communication department, seemed overwhelmed by the numbers. "600,000 contracts times ten minutes to register one contract makes 6,000,000 minutes or 100,000 hours that are accounted for on our automated system," she said.

The director reports that registration has been proceeding without major difficulties. "We would like to thank all pension fund management companies for joint management of second pillar contracts," Pôbišová told The Slovak Spectator.

However, about 6.1 percent of those contracts coming into Social Insurer are not valid.

"The most common mistake is that a saver does not have pension insurance in Social Insurer or he is not in our register of savers," the director explained.

About 2.1 million people are eligible to take part in the pension reform. The Labour Ministry expects 1.1 million people to transfer part of their social insurance from the pay-as-you-go system into the new capitalisation pillar. Eight pension fund management companies were established during the last year to administer the funds.

Individual pension management companies are not allowed to release how many clients have registered with them until June of next year. [See article, page 8.]

Despite the legislation banning the release of information, the business daily Hospodárske noviny recently published some figures. According to the newspaper, Credit Suisse Life & Pensions registered the largest number of savers for 31.68 percent of the market share. Allianz-Slovenská dôchodková has 27.2 percent and VÚB Generali 17.28 percent market share. Those three companies have already exceeded the minimum of 50,000 clients required by the law to continue doing business.

Pension fund management companies consider the number of registrants a pleasant surprise. They are more or less confident that their initial investments in advertising have paid off.

"We were, for sure, positively surprised from the point of view of the number of clients and trust of citizens for the new system. The original estimations saw roughly 800,000 to 850,000 registered clients during 2005. However, if the current pace of registration continues, we will witness in excess of one million pension savers this year. As concerns our investments into advertising, we are content with the return. Clients know our advertisements, they recognize our brand and have a positive perception of our group," said Ladislav Batik, project manager of Aegon.

Jozef Paška, chairman of the board of directors at Allianz-Slovenská DSS said: "We predicted this development. Despite various recommendations to leave the decision for later, people understand that it is more convenient for them to join the savings plans as soon as possible.

"Citizens are making their decisions according to their trust in the various brands. Good recognition of the brand as well as long-term experience on the Slovak market are the main advantages that Allianz-Slovenská poisťovňa uses in its campaign. Thus, our advertising costs are lower compared to companies that must first establish their brand on the market".

Dušan Doliak at Credit Suisse Life & Pensions, DSS commented: "Credit Suisse Life & Pensions is more than happy with the current development of the registration of participants in the second pillar. Our analysis shows that investment in the advertising paid off. Sales are going slightly above our initial expectation. We are positively surprised with our market share".

Tatiana Balážová at ČSOB, DSS also sees the dynamic increase in the number of registrants since January as a positive surprise.

"ČSOB, DSS has always considered the official estimates of approximately one million potential savers as conservative. We suspect that about 70 percent of the active population, which is 1.2 million people, will join the reform before June 2006. The development [in the number of our] clients is in line with our set expectations and plans", she said.

Frans van der Ent at Life & Pension ING, Slovak Republic, expected interest in the pension savings scheme but in his opinion, the numbers exceeded the expectations of most professionals.

"It confirmed that the reform was well presented and people understood the importance of this systemic change. Participating in the second pillar means spreading the risks and I am glad that we helped to spread this message. However, at the beginning of the reform some parts of the legislation concerning the pension fund management companies were not clear enough. Confusion and quarrels in the industry regarding the use of properly licensed agents as mediators was the most disappointing factor during this period.

"Reality has shown that size of advertisement campaign is not the sole decisive factor for attracting new clients. Other key factors, often more important, are size of the distribution network and its motivation," van der Ent added.

Van der Ent is quite content with the intensity of the advertising campaign that ING started last autumn in combination with a targeted public relations campaign focused on security, professionalism, integrity and client orientation. ING DSS is sure that its numbers will exceed the legally required levels very soon.

Peter Socha at Prvá dôchodková sporiteľňa, DSS thinks the number of clients signing up for individual pension accounts is in line with its expectations. "Of course, every company is pleased when its results are getting even better. That is why we also believe that the development over the next few months will be even better. Our advertisement should help us fulfil our aims. We recently launched a new campaign with someone that everyone in Slovakia knows [a famous Slovak and NHL ice-hockey player]".

Alojz Marsina at Sympatia-Pohoda, DSS said that the pace that Slovaks are signing up for the second pillar is comparable to Poland and Hungary. However, he admitted that the high interest surprised industry insiders as well.

Marsina considers his company's expenditures on advertising were used effectively. Sympatia-Pohoda perhaps invested the least in its campaign but according to surveys, the brand is one of the most known on the market.

Robert Kubinský at VÚB Generali, DSS does not think the market has shown any significant surprises.

"From our point of view, the market is in line with expectations. Our aim is to attract 200,000 clients. We have no doubts that we will reach our goal."

Going into the future

The entire pension fund management industry expects the initial excitement about the second pillar will ease off and the pace of new registrants will decrease this year. They envisage another jump in the second quarter of 2006, just before the deadline for entering the second pillar.

By law, those pension fund management companies that attract fewer than 50,000 clients will lose their licences. Signed contracts will be transferred to those companies that met the minimum requirements.

"Pension savings is a long-term process. Based on experience in Latin America, I think client migration will not be a crucial problem, but rather solvency and credibility of pension fund management companies," concluded van der Ent at Life & Pension ING.